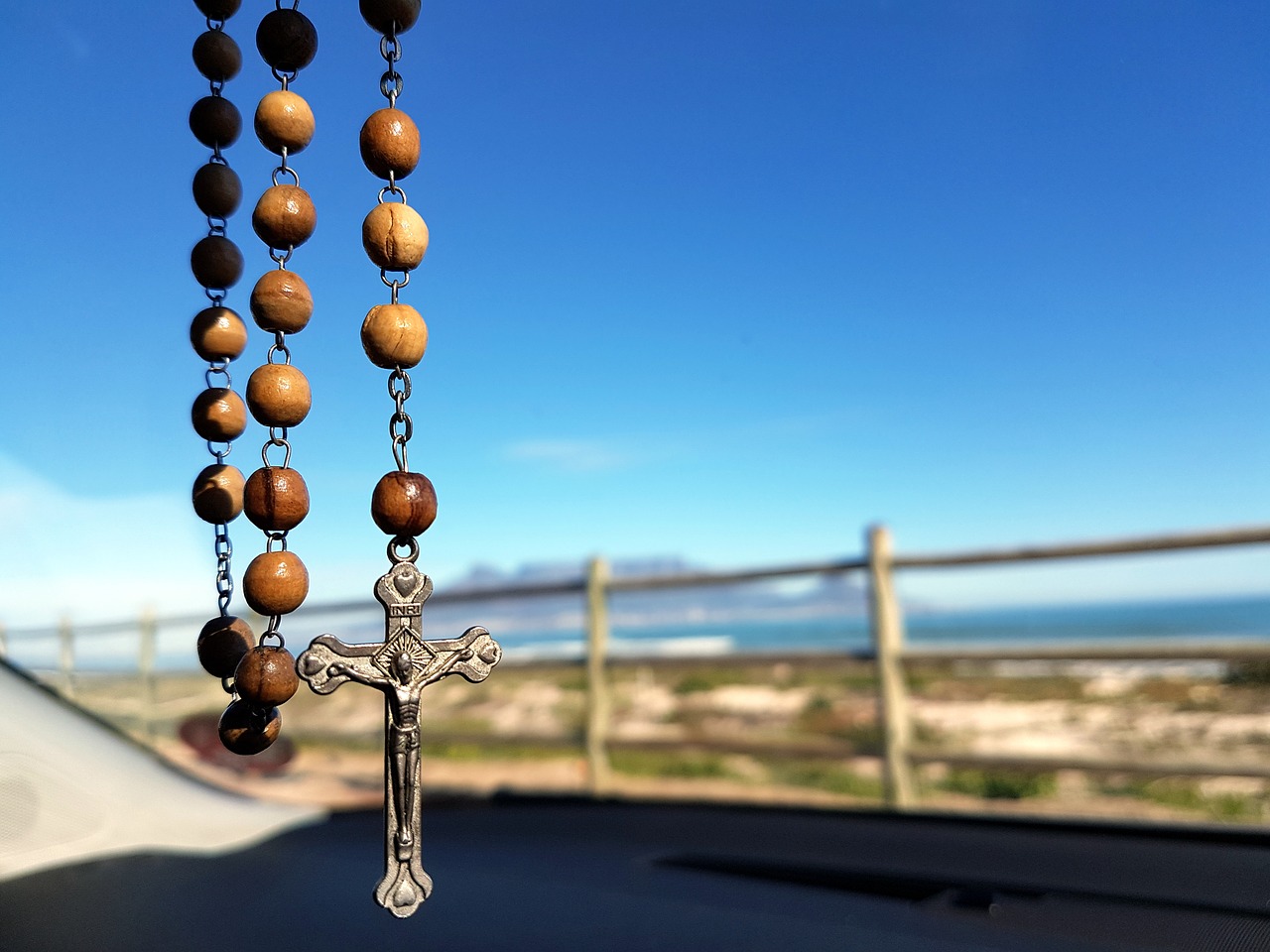 The Rosary is a necklace with many beads on it and it has a crucifix down at the very bottom. But far from being a mere fashion accessory for Christians, the rosary is actually a tool used by Roman Catholics in prayer. Catholics run their fingers across the beads to count the prayers which comprise a rosary prayer session. There are, to my knowledge, two types of rosary prayer: “The Rosary” and “The Divine Mercy”. The former consists of many Hail Marys that run across the “decade” beads (i.e the 5 sets of 10 smaller beads that form the part of the rosary that hangs around the neck) preceded by other prayers that lead up to those 5 sets of 10 Hail Marys such as “the Lord’s Prayer”.

The question I’d like to reflect on in this blog post is whether or not it is consistent for a Protestant to pray the Rosary. Is The Rosary compatible with reformed theology? 1

Not The Typical Rosary

I dabbled in Roman Catholicism a little bit when I was a teenager, and I did pray the standard Rosary prayer. But I soon stopped because of a variety of reasons. For one thing, it just didn’t sit right with me. Although I was told that I wasn’t praying to Mary, but merely asking Mary to intercede for me (just as you would ask any Christian brother or sister to pray for you), it certainly felt like I was praying to Mary. Secondly, I doubted whether Mary could really hear my pleas for intercession in the first place. God can hear all of our prayers simultaneously because He is omniscient (Job 21:22, Psalm 139:1-4, Proverbs 15:3, Isaiah 40:13-1, Hebrews 4:13). In fact, He knows what we’re going to pray for before we even pray it (Psalm 139:4, Matthew 6:8). Mary, however, is just a human being. What if a million people in the world were praying the Rosary or other Marian prayers all at the same time? How would she be able to process them all? Wouldn’t it create a scenario like the one in Bruce Almighty where Bruce just hears a cacophony of prayers coming at him all at once?  Furthermore, if one says “Well, Heaven is outside of time, so it could be that she isn’t receiving them all at once, but one at a time”, while that might solve the problem, are we to suppose that Mary is simply spending all of her time listening to petition requests and then bringing them to Jesus? Does she not do anything else with her afterlife? Thirdly, we have no reason to believe that any of the Saints can hear any of our prayers at all. Appealing to Popes won’t do as I’ve no reason to believe the words of the popes are inspired, in contrast with The Bible.

I would not recommend praying THE Rosary. It comes dangerously close to praying to someone other than God, and we have no reason to believe that Mary or any of the canonized saints can hear us anyway.

But What About Rosaries Directed Soley Towards God?


I can’t find much objection to Rosary prayers that are directed solely towards God. God can hear us whenever we pray, and it doesn’t matter how many people are talking to him at that moment. In His omniscience and omnipotence, He is able to discern what each one of us is saying. Indeed, God even knows the depths of our hearts (Proverbs 15:11). The Divine Mercy prayer would almost fall under this category, except that there is at least 1 Hail Mary in the prayer (see here). Though I suppose one could replace that one bead with a different prayer (perhaps another “Our Father” or even an unscripted prayer in your own words).

When I prayed The Divine Mercy, I was praying for the forgiveness of my own sins, and I also thought about lost souls I knew of who didn’t know Christ, and I trusted in the Spirit to intercede for them on my behalf as I went through the beads saying “For the sake of His sorrowful passion, have mercy on us and on the whole world”. I always felt more confident that my Divine Mercy prayer sessions were heard because they were directed at Yahweh.

You can even craft your own custom made rosary prayers towards Yahweh. I’m in the process of making one now. I’m implementing some well known Catholic prayers as well as ones that I myself scripted.

But The Rosary Involves Repetition. Didn’t Jesus Say Not To Pray Repetitiously?


I can anticipate one objection to praying rosary prayers even to Yahweh, and that is that He said in Matthew 6:5-8: “And when you pray, do not be like the hypocrites, for they love to pray standing in the synagogues and on the street corners to be seen by others. Truly I tell you, they have received their reward in full. But when you pray, go into your room, close the door and pray to your Father, who is unseen. Then your Father, who sees what is done in secret, will reward you. And when you pray, do not keep on babbling like pagans, for they think they will be heard because of their many words. Do not be like them, for your Father knows what you need before you ask him.”


In this passage, Jesus says not to pray repetitiously like the pagans do. The Rosary involves much repetition of prayers, so it would seem to follow that, per Matthew 6, we should not pray the rosary, even if all of our prayers are directed only toward The Godhead.

The problem with this objection is that Jesus is addressing our motives for praying. He doesn’t simply stick a ban on repetitious prayer, but he says not to pray repetitiously like the pagans because the pagans believe that the more they pray and the longer you pray, the more likely it is that you’ll receive what you’re praying for. Jesus says not to do that because the length of our prayers isn’t going to affect the outcome. Jesus isn’t banning repetition, but banning repetition driven by a particular motive; that motive being “Okay, so if I pray for three hours straight and ask God to do X 500 times, I’ll get X for certain!”

However, I don’t think even the Roman Catholics pray the rosary because they think it’ll increase the odds of receiving an answer. I don’t know, maybe they do, but I’ve never heard that rationale given by them.

I think if one has motives for their repetitious prayers other than what Jesus mentioned, then Matthew 6:5-8 doesn’t apply. Here are a few I can think of:

1: The nature of rosary prayers induces a meditative, focused like state.

When I prayed The Divine Mercy, I found that I was actually meditating on God, His love and goodness, and our desire for lost souls to come to Him to be saved. It prevented my mind from wandering as it often does in ordinary, unscripted prayer. When I meditated on God’s attributes, it induced a strong urge for me to break out in praise to Him. It induced awe in me. It made God awesome to me, to think that he would love all of humanity so much to endure brutal torture and then pursue us by His Holy Spirit, because He loves us so much. I can’t imagine anything that induces awe of the Divine to be a bad thing.

2: It Helps When You Don’t Know What To Pray For


Romans 8:26 says ““In the same way, the Spirit helps us in our weakness. We do not know what we ought to pray for, but the Spirit himself intercedes for us through wordless groans.” Sometimes we don’t know what we need to be praying for. There have been prayer sessions of mine where I kneeled before God, ready to do my morning prayers, and I just couldn’t think of anything to say. I was literally speechless. The best I could come up with was something like “God, help me out here. We got some problems with finances and need some help. And forgive me for whatever sins I may have committed yesterday. Amen.” Yikes! What a stinker or prayer that was! In times like this, when it’s good to just break out in chanting and rely on The Holy Spirit to read your mind and carry your petitions to the Father, as Romans 8:26 says He does.

As Timothy Keller said in his book Prayer: Experiencing Awe and Intimacy With God, there are several different kinds of prayer. There’s adoration (giving praise to God for who and what He is), there’s Thanksgiving (thanking God for specific things He’s done in your life), there’s petition (asking God to do things for you or those you love), and there’s confession (telling God your sins and asking Him to forgive them). Intercession would fall under the category of a petition.

While we can certainly do all of these types of prayers unscripted, when you’re having an off day and find yourself speechless, it can be beneficial to have some words handed to you. The Divine Mercy would fall under the petition and confession category since you’re praying for all lost souls in the world and for the forgiveness of your own sins, and The Lord’s Prayer is included.

One can make custom made Rosary prayers to reflect the other types of prayer mentioned above.

Although if you don’t find that words evade you, then I recommend praying an ordinary, unscripted prayer.


Is it okay for Protestants to pray the rosary? I would say that depends on a couple of things. Number 1: Who are you directing it towards? A human saint or God? Number 2: What is your motivation for using this tool? Do you think repetitious words will make an answer more likely? Or do you find that it gets you in a meditative, focused state, induces awe of God, and helps when you don’t know what to say?

I think if a Protestant wants to use a rosary, he should feel free to do so. Under the guidelines I’ve given in this blog post, I think you can use a rosary in such a way as not to come into conflict with protestant/reformed theology.

1: By “Reformed Theology”, I am not referring to the soteriological position known as Calvinism. Rather, I’m simply referring to Protestantism and the theology that sprang out of the movement Martin Luther started. The term “reformed” has actually been hijacked by Calvinists. It originally meant anyone who descended from Roman Catholicism. Historically, Jacob Arminius was considered a reformer.