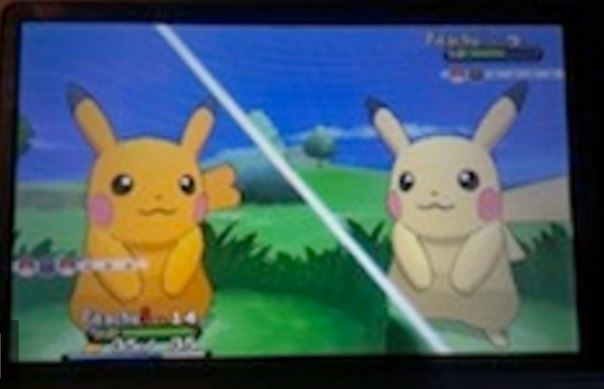 People who know me personally know that I have been a big fan of the Pokemon games since I was 7 years old, and even though I’m grown, I still play the games and watch the show. In fact, I think there are many 20-30 year olds enjoying these games as there are those in the actual target demographic. I am also a dedicated Christian and rigorous apologist. This blog post is going to meld my passion for Pokemon and Apologetics. Also, I’m going to presuppose that you at least know what The Fine Tuning Argument is, so if you don’t, click on this blog post and read the first three paragraphs, then come back to this one. Also, to non-Pokemon players, some of the terminology can sound like foreign language. I’ll explain as much as I can, but to keep this article reasonably short, I’ll often link to a page explaining the definition of a word.

What Are Shiny Pokemon and How Do You Get Them?

Since the Gold and Silver games, players could put a male and female Pokemon in “The Day Care” to breed their mons. Eventually, The Day Care Man/Woman would alert you if you talked to them again after taking an X number of steps and say essentially “We found your Pokemon holding this egg! We have know idea how it got there!” (because, you know, this game is aimed at children who likely don’t know about sex yet), “Do you want it?” and then you can select yes, walk a certain number of steps, and the egg will hatch. Also, since gen 2, players could get certain Pokemon species of an alternate color than their usual colors. These are called “shinies” because when you first encounter them, send them into battle, or hatch them, they will sparkle for a second. Players who want shinies sometimes will purposefully try to get them by obtaining a “Shiny Charm” after completing their Pokedex and some other item (the name of which I can’t remember) which will increase their chances of hatching a shiny, and then proceed to just hatch egg after egg after egg after egg after egg until one of the hatched Pokemon is a shiny. Breeding is also helpful for obtaining a Pokemon with certain IVs. IVs stand for “Individual Values” and it’s essentially the DNA of a Pokemon which will determine how strong it will be. You can train a Pokemon with poor IVs and perfect IVs in the same way, and the latter will always be stronger than the weaker. Competitive Players (myself included) usually obtain Pokemon this way to beat Battle Facilities post-story (like The Battle Tree in Sun and Moon), and to compete in tournaments.

What Are The Odds Of Getting One?

As for shinies, there is a 1 in 8,000 chance that any Pokemon you encounter or hatch will be a shiny Pokemon rather than a regular one. This is in the situation of not using anything to increase your chances like a shiny charm. When it comes to encountering shiny Pokemon in the wild, I have only encountered 3 in my entire 20 years of playing Pokemon. Hatching Pokemon with items to increase my odds, I have done only once. So, I have obtained a total of 4 shiny Pokemon my entire life.

In the case of hatching a shiny, I used two items; The Shiny Charm, and the one I can’t remember the name of, and increased my odds to 1 in 500. Even with a 1 in 500 chance, I still had to hatch nearly 200 eggs before getting my shiny.

What Does This Have To Do With The Fine Tuning Argument?

Let’s say you obtained a copy of a Pokemon game and played it all the way through, from getting your starter from the Professor to becoming Pokemon League Champion, and let’s say that every single Pokemon you encountered along the way was nothing but a shiny Pokemon, even your starter. What would your conclusion be? That you were encountering each of these shiny Pokemon by sheer chance? By accident? The RNG just happens to be giving you a shiny Pokemon with each encounter? Of course not! You would immediately suspect that the cartridge had been tampered with by a hacker. Some hacker reprogrammed the game to only give you shiny Pokemon and nothing else. You would never conclude that you were that lucky. Each random counter has a 1 in 8,000 chance of being a shiny, and you just happen to get one every time? No. You would conclude that the game was rigged by some hacker.

If we wouldn’t believe that the shiny Pokemon were appearing by chance, why would we believe the universe’s physical laws fell into the narrow life permitting range by chance?

To make matters worse, I often find that if I hatch eggs trying to get a certain nature by chance, I spend all day hatching eggs until I eventually get one. Do you know what the odds are of a Pokemon having a certain nature? 1 in 25! Much lower odds than a shiny. And I still can’t get it in a mere few tries. This is why I use an Everstone when breeding. I don’t have as much faith in chance as atheists do! I have never gotten the right nature on the first try without intelligently designing the process.

“Well, perhaps if you have an infinite number of universes, eventually one would be finely tuned for life. Since we can only exist in one that has life, we shouldn’t be surprised that that’s the one we live in” the atheist typically replies to The Fine Tuning Argument. Likewise, one might say “If you just hatch enough eggs, eventually you’ll get a shiny.” or “Eventually, you’ll get the right nature”.

While it’s true that mathematically, even the most improbable event is certain to occur if you multiply your probabilistic resources, the problem is that we only have evidence for one try. We only have evidence for one universe. There’s no way to know whether or not we live in a multi-verse. The multi-verse must be believed on blind faith, something that I, as a rational person, refuses to rest in as an epistemological grounding. If atheists insist on repeatedly appealing to this theory as a refutation to the fine tuning, the least they can do is provide at least a little bit of evidence for it. If not, shut up and go home. I’m not joining your infinite universe religion on blind faith. Only superstitious people believe something without reasons to believe.

Moreover, this doesn’t match with the shiny Pokemon analogy given above. The analogy given above is that every Pokemon encountered is a shiny. And truth be told; this likewise can be explained away by appealing to an infinite number of universes. “Oh well. No need to appeal to a hacker. There’s an infinite number of universes. There’s bound one of those infinite universes where one of the me’s encounters nothing but shinies whenever he encounters a wild Pokemon.” The multi-verse wouldn’t just make chance a plausible alternative for the fine tuning, but a plausible alternative to explain away the nothing-but-shinies situation as well. In fact, you could explain away this entire blog post as a result of chance. You could explain away evidence in a court of law as a result of chance. The Multi-Verse would essentially render a design inference in every single area of life null and void if accepted, and this is one of the reasons why I’m not persuaded by it (other than the lack of evidence). The reductio ad absurdum is legitimate.


If you’re an atheist and a Pokemon player, hopefully I’ve gotten you to think about the unreasonableness of your position in light of the fine tuning of the laws of physics. And if you still have so much faith that chance could create a life permitting universe, then I dare you to never use Everstones, Shiny Charms, or any other RNG rigging items ever again. If you do, you’ll be inconsistent.