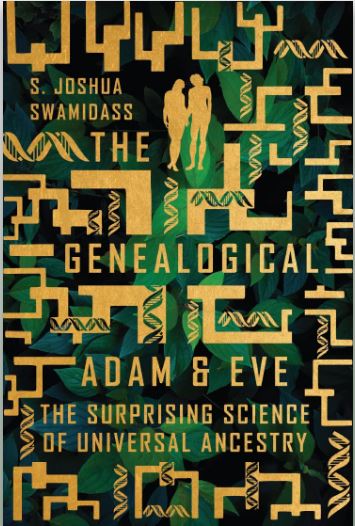 In this book, “The Genealogical Adam and Eve: The Surprising Science Of Universal Ancestry”, S. Joshua Swamidass proposes that God could have created Adam and Eve de novo (i.e God literally took a scoop of dust and transformed it into Adam, put Adam to sleep and took a chunk of his side to make Eve) and that everyone is a descendent of that originally de novo created couple. This part of the hypothesis that Swamidass proposes is in line with the traditional understanding of Adam and Eve’s creation and our relationship to them. However, Dr. Swamidass also proposes that there were homo sapiens who lived outside the garden of Eden that Adam and Eve’s descendants interbred with once they were kicked out for disobeying God. These homo sapiens who lived outside the garden of Eden numbered in the thousands and came into being through the widely accepted and scientifically established evolutionary process. These humans evolved from lower hominids and share ancestry with the great apes such as chimpanzees, gorillas, and orangutans. This would explain why our genome is so similar to the genome of chimpanzees, gorillas, and so on. We look like we share genetic ancestry with them because we do.

When they (the evolved humans outside of the Garden Of Eden) interbred with the descendants of Adam and Eve, their genetic material was shared and mixed. This hypothesis enables us to affirm the traditional de novo view of the historical Adam and Eve, that everyone alive today can trace their ancestries back to them but it’s also fully compatible with the mainstream scientific consensus of macro-evolution (or universal common ancestry) and the evidence from population genetics that says the number of people in the human population could never have been as low as just two. That’s his hypothesis in a nutshell. In his book, he defends its scientific validity using peer-reviewed scientific facts and even builds on the unfinished work of prior scientists.

Swamidass correctly points out that the biblical authors had no concept of genetics. DNA hadn’t been discovered yet, and it is only appropriate to interpret scripture the way the original author and audience would have understood it. Rather, Dr. Swamidass says, the biblical authors thought in terms of genealogies. Swamidass explains that asserting that Adam and Eve are our universe GENEALOGICAL ancestors isn’t the same as asserting that they’re universal GENETIC ancestors of all people. Swamidass argues that population genetics has only disproved the latter, but not the former, and this is important because the former is what the biblical authors were claiming.

For those who, like me, are committed to a historical Adam and Eve, and who, unlike me, think The Bible requires Adam and Eve to be de novo creations, and who also find the evidence for macro-evolution compelling, and just don’t know how to integrate what they know from God’s Word and God’s World, this book will be a Godsend.

I myself do not believe that a de novo creation of Adam is required, as I explained in my blog post “Why There’s No Conflict Between Evolution and A Historical Adam” , I do not believe that Genesis 2 is really making a claim about Adam and Eve’s material origins. My interpretation of Genesis 2 and 3 is the same as what John Walton lays out in his book “The Lost World Of Adam and Eve: Genesis 2-3 and The Human Origins Debate”. That said, I find it valuable to have a hypothesis like The Genealogical Adam and Eve which would allow one to accept macro-evolution but also interpret Genesis 2 as making that claim. And moreover, while I find most of Walton’s work on Adam and Eve compelling, I found his treatment of Acts 17:11 and a couple of other texts implying Adam gave rise to all mankind (at least at the time of the first century) less than persuasive.

In any case, I find The Genealogical Adam and Eve (GAE) hypothesis scientifically valid and scripturally acceptable. He doesn’t have to force-fit science into The Bible or distort The Bible to fit the science. Nor is he proposing any esoteric scientific ideas, like what we might dub “creation science”. If I were ever convinced that Genesis 2 did speak of material origins and not just archetypal aspects of Adam and Eve, Swamidass provides me with a nice fallback position. In any case, I think that, as with the miraculous birth of The Last Adam (Jesus), the miraculous birth of the first Adam (Adam) cannot be proven or disproven scientifically. And as to whether the historical Adam really did have parents or not, I’m now agnostic on the issue. I don’t think that scripture compels me to embrace a de novo view of Adam and Eve’s creation, but after reading Joshua Swamidass’ book, I don’t think science requires me to reject it either.

“The Genealogical Adam and Eve” will be available to purchase on December 10th of this year.