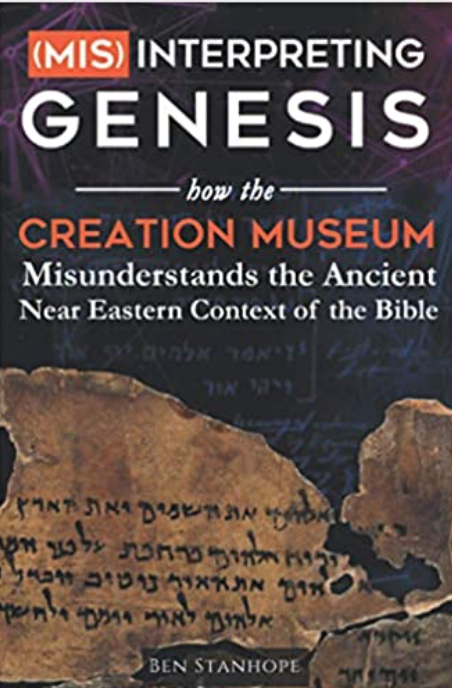 The book is divided up by three sections. Section 1 titled “Proposed Claims of Extinct Animals in the Bible”, examines the creatures in scripture called The Leviathan, Behemoth, and Unicorns. Examining the Bible in its original language and context, and examining the other creation myths of the Ancient Near East, Stanhope shows that the Leviathan is a mythological sea monster that served as a symbol of chaos and disorder. Like Enuma Ellish’ Tiamut and The Baal Cycle’s Tanun, Yahweh is depicted as crushing the heads of this massive sea monster as an act of creation. This is because ancients believed that something didn’t exist until it had function in an ordered system. Chaos must be subdued. Marduk defeats Tiamut in the Enuma Ellish before he rips her body in half and uses part of it to make the land and the other part to make the sky. However, while Psalm 74 (verse 14) and other passages (i.e Psalm 104, Psalm 89:5-12, as well as Job 38:8-11 and Isaiah 51:9-10) speak of this creature, and how God defeated it, triumphed over it, plays with it, etc. Genesis 1 is silent on this creature’s very existence. Genesis 1 simply mentions “the deep” (Genesis 1:2) and God’s Spirit hovering over its surface. Stanhope argues that the writer of Genesis did this as a polemic against the gods of the other creation narratives, basically saying “God is so supreme, He doesn’t even need to have the battle. He can get right down to business.” Behemoth wasn’t a dinosaur either. He was more of a “Super Bull”, and his tail was….well…..not a tail. I’ll let you read the book for yourself to find out what it was. ( ͡º ͜ʖ ͡º )

Section 2, “Reading Genesis Like an Ancient Israelite”, examines Ancient Hebrew concepts and how they compare and contrast with neighboring cultures. Section 2 begins with chapter 5 of the book titled “Does Genesis 1:1 describe an actual beginning?” Here, Stanhope goes into the grammar and syntax of the first verse of the creation account, compares it with how other creation myths open, and interacts with the latest scholarship on this issue, and makes a powerful case that Genesis 1:1 should not be read as an independent clause (i.e a complete sentence in its own right as most English translations render it). Rather, Genesis 1:1 should be read as a dependent clause, with Genesis 1:2 being the circumstantial clause, and Genesis 1:3 being the main clause.

In other words, Stanhope argues based on the lexical evidence that Genesis 1:1-3 should be read “When God created the heavens and the earth, the earth was formless and void, and darkness was upon the face of the deep with the spirit of God hovering over the Face of the waters. And God said ‘let there be light’…”

Stanhope interacts with his critics who maintain that Genesis 1:1 SHOULD be read as an independent clause rather than a dependent clause and provides compelling reasons why their objections fail. He also notes that he isn’t a lone voice in arguing for this translation. He cites many prominent scholars;

I think Stanhope is correct, and I have employed the fact that Genesis 1:1 is a dependent clause in my case for the functional origins interpretation in my 43 page paper “Genesis 1: Functional Origins, Temple Inauguration, and Anti-Pagan Polemics” as well blog posts which can be found by clicking here.

With the verse rendered “When God created the heavens and the earth…” or “In the initial period in which God created the heavens and the earth”, this presupposes that material is already present. It is not describing some Big Bang origin of all matter, energy, space, and time ex nihilo as many creationists (both of the old earth and young earth variety believe). This is an odd feature of the text if Genesis 1 is meant to be an account of the material origins of the world and everything in it. Wouldn’t a material origins account explain the origins of material? And with the world being covered in sea “the deep” in Genesis 1:2, which, as already explained, was a symbol of chaos and disorder in Ancient Near Eastern thinking. This provides another piece in the cumulative case for the functional origins view of Genesis 1.

Before moving on to discuss the nature of the creation days and what actually happened during them, he takes an excursis into Israelite cosmology. He discusses both the evidence in the text, as well as evidence in external Ancient Near Eastern texts that the people of that day believed the Earth was a flat disc covered by a solid dome that held back primordial waters, and the dome was held up by “pillars”. And contrary to what concordists will tell you, this isn’t a construct conjured up by scholars cherry-picking verses out of The Bible to construct a silly view of the Earth to make the biblical authors look stupid. There are literally ancient paintings and carvings from different cultures that depict this view of the world. I have to think that people who deny that The Bible contains “dome cosmology” like Hugh Ross and William Lane Craig just aren’t aware of these. “A picture is worth a thousand words” after all. This is all covered in chapters 6, 7, and 8. Now, this does not mean that The Bible is in error nor does it mean that we ought to become flat earthers. What God did in inspiring the text was “accommodation” which Stanhope fleshes out in more detail near the end of the book.

After going on a tour of ANE cosmic thinking, Stanhope returns to the days of Genesis. He defends “The Cosmic Temple Inaguration” interpretation. I was pleased to see him defend this view as it’s the view of Genesis 1 that I adopt. He also argues that a lot of the purpose of the text was to polemicize the religious beliefs of Israel’s neighbors (which is something I also affirm). I wasn’t sure  how Ben Stanhope would view Genesis, but I’m glad to have found another biblical scholar who accepts the cosmic temple view. It seems it’s gaining traction. John Walton and J. Richard Middleton are also defenders of this view.

I first learned about The Cosmic Temple view from John Walton’s book The Lost World Of Genesis One: Ancient Cosmology and The Origins Debate and I owe it to Walton for convincing me of the view (well, Michael Jones of Inspiring Philosophy gets some credit as well). This view says that God took 6 days to inagurate the universe as His temple. On the 7th day, God came to take up residence in His temple “He rested”, just as gods did in the Ancient Near East when the ceremonial opening of their temples were completed. Stanhope gives a lot of compelling arguments both from within the biblical text itself as well as from external sources that this is what the author of Genesis 1 was trying to convey.

Section 3, “A Path Forward”, discusses the role of the Holy Spirit in interpreting the Bible and the value of scholarly study when trying to understand the Bible (or anything else) faithfully.  What Stanhope says in this portion of the book is something Christians desperately need to get through their heads. I’ve gotten on my soap box about this on social media on more than one occasion. I found myself giving hardy amens throughout this entire section. Way too many Christians have this idea that all they need to do is just crack open their Bible on an afternoon, read it, and hope The Holy Spirit supernaturally zaps their minds with insight. Stanhope argues from scripture that The Holy Spirit never promised to do this, and points out how absurd it would be if we took this attitude in other areas. In other words, he uses reductio ad absurdum arguments. The Holy Spirit is not your own personal commentary. You need to do your homework in understanding the details of the text. Exegesis and the practice of hermenuetics is something Christians should not frown upon. I believe this attitude is why we have so many other modern heresies and cults that we do. Stanhope’s words in this portion of the book is something many in the pews need to hear, and I just pray it doesn’t fall on deaf ears.

Overall, I think this is a fantastic book poking holes in YEC. It does so using just the biblical text in its cultural context. Ben Stanhope doesn’t once talk about science. He’s not a scientist and doesn’t claim to be. Stanhope merely exposes how fundamentalists like Ken Ham and his ilk twist and abuse the word of God to promote their anti-science agendas.