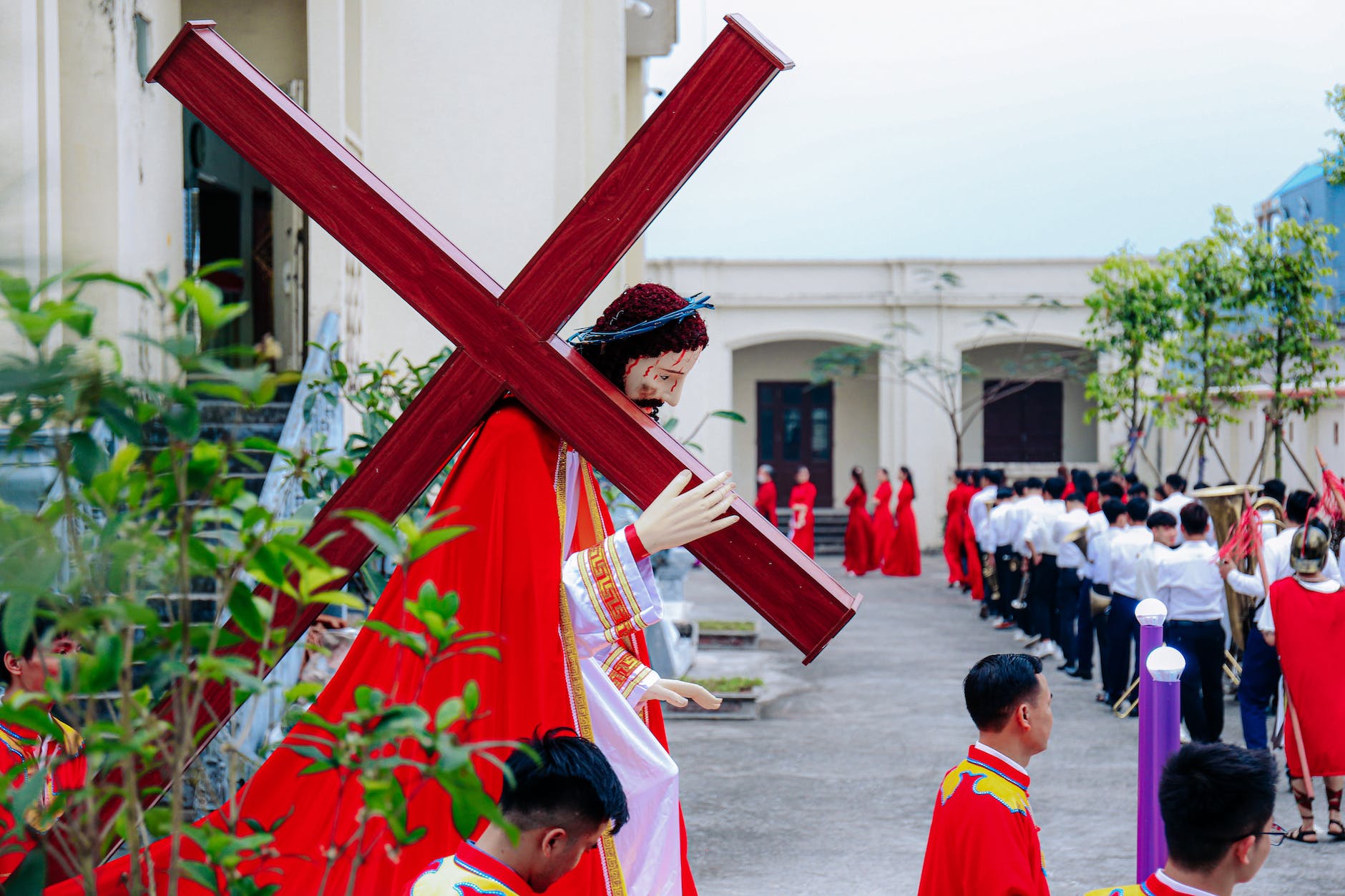 “Who has believed our message and to whom has the arm of the Lord been revealed? He grew up before him like a tender shoot, and like a root out of dry ground. He had no beauty or majesty to attract us to him, nothing in his appearance that we should desire him. He was despised and rejected by mankind, a man of suffering, and familiar with pain. Like one from whom people hide their faces he was despised, and we held him in low esteem. Surely he took up our pain and bore our suffering,
yet we considered him punished by God, stricken by him, and afflicted. But he was pierced for our transgressions, he was crushed for our iniquities; the punishment that brought us peace was on him, and by his wounds we are healed. We all, like sheep, have gone astray, each of us has turned to our own way; and the Lord has laid on him the iniquity of us all. He was oppressed and afflicted, yet he did not open his mouth; he was led like a lamb to the slaughter, and as a sheep before its shearers is silent, so he did not open his mouth. By oppression and judgment he was taken away. Yet who of his generation protested? For he was cut off from the land of the living; for the transgression of my people he was punished. He was assigned a grave with the wicked, and with the rich in his death,
though he had done no violence, nor was any deceit in his mouth. Yet it was the Lord’s will to crush him and cause him to suffer, and though the Lord makes his life an offering for sin,
he will see his offspring and prolong his days, and the will of the Lord will prosper in his hand. After he has suffered, he will see the light of life and be satisfied; by his knowledge my righteous servant will justify many, and he will bear their iniquities. Therefore I will give him a portion among the great, and he will divide the spoils with the strong, because he poured out his life unto death, and was numbered with the transgressors. For he bore the sin of many, and made intercession for the transgressors.” – Isaiah 53

This passage is, in my opinion, one of the most powerful prophetic texts about the crucifixion of Jesus. So many of the descriptions of the servant in this passage correspond to the information about Jesus we get from the New Testament. In fact, most Christians just take it for granted that this text predicted the death and resurrection of the Messiah and wonder how anyone could deny it. Yet, people do. Adherents to Judaism, for example, try to avoid concluding that Jesus fulfilled this passage by saying that the text isn’t even about the Messiah at all, but rather, the text is prophesying something that Israel will do. If that’s the case, then Isaiah 53 cannot be used as Old Testament proof that Jesus was and is the Messiah that they are longing for.

Reason 1: The Messianic Interpretation Was Dominant Prior To The Rise Of Christianity

This isn’t the strongest argument against the Israel interpretation, but it should at least give Jews pause. When you scan the pre-Christian rabbinic commentaries on Isaiah 53, what you find over and over again is the messianic interpretation instead of the Nation-Of-Israel-Interpretation.

Jonathan ben Uziel (early 1st century), for example, in his Targum (an Aramaic translation of the Hebrew Bible), paraphrasing Isaiah 53, wrote: “My servant, the Messiah, will be great, who was bruised for our sins.” Furthermore, the Talmud (in the Midrash Tanchumi) states with reference to Isaiah 52:13 that “He was more exalted than Abraham, more extolled than Moses; higher than the angels.”

Reason 2: Isaiah Says The Suffering Servant Will Be Sinless

The servant of Isaiah 53 is described as an innocent and guiltless sufferer. Even a casual reading of the Old Testament will show you that Israel was certainly not sinless. One doesn’t need to scan the OT much to find examples of idolatry, adultery, and all kinds of sinful activities among the people of Israel. The very first commandment was the very first sin Israel committed before God even established them as a nation-state (see Exodus 20:3, cf. Exodus 32). Isaiah 1:4 describes Israel as follows: “Alas sinful nation, a people laden with iniquity. A brood of evildoers, children who are corrupters!” Isaiah goes on to characterize Judah as Sodom, Jerusalem as a harlot, and the people as those whose hands are stained with blood (verses 10, 15, and 21). Do Judaism adherents seriously expect us to think that Israel is the servant of Isaiah 53 who had “done no violence, nor was any deceit in his mouth!”?

I cannot bring myself to believe that God would inspire Isaiah to speak of Israel as an innocent, sinless nation in spite of overwhelming Old Testament evidence to the contrary.

Reason 3: The Person Mentioned In This Passage Suffers Silently and Willingly.

Yet everyone complains during times of suffering, even and I would say especially the Israelites. Simply read the account of the Exodus, where they complain constantly, trying God’s patience (e.g Exodus 16:32). Moreover, you can’t tell me that Jews during the Holocaust didn’t complain about the persecution they endured under Adolf Hitler. Surely many of them complained about the evil the Nazi regime had brought on them! When the Philistines oppressed the Israelites, they complained to God (e.g Judges 3:9)

Reason 4: The Death The Suffering Servant Dies Is For Atonement For Sins

Isaiah says of the servant; “Surely he took up our pain and bore our suffering, yet we considered him punished by God, stricken by him, and afflicted. But he was pierced for our transgressions, he was crushed for our iniquities; the punishment that brought us peace was on him, and by his wounds we are healed. We all, like sheep, have gone astray, each of us has turned to our own way; and the Lord has laid on him the iniquity of us all. “

The death that this servant dies is in atonement for sins. Yet, when did the nation of Israel die to atone for anyone’s sins? What event in history could be considered the nation of Israel making payment to God on behalf of “the iniquity of us all”? In what sense are we healed by Israel’s wounds?

Okay, So Isaiah 53 Can’t Be About Israel, But That Still Doesn’t Mean It’s About The Messiah

At this point, an objector may respond that showing the text can’t be referring to the nation of Israel doesn’t automatically justify the messianic interpretation. True, but when you consider other possible candidates that have been proposed by Rabbis and Jewish Priests over the years, you find that they all have interpretive flaws as well. As Fred Klett of Chaim.org explains: “Isaiah said he was a sinful man of unclean lips (Isaiah 6:5-7). And Isaiah did not die as an atonement for our sins. Could it have been Jeremiah? Jeremiah 11:19 does echo the words of Isaiah 53. Judah rejected and despised the prophet for telling them the truth. Leaders of Judah sought to kill Jeremiah, and so the prophet describes himself in these terms. But they were not able to kill the prophet. Certainly Jeremiah did not die to atone for the sins of his people. What of Moses? Could the prophet have been speaking of him? But Moses wasn’t sinless either. Moses sinned and was forbidden from entering the promised land (Numbers 20:12). Moses indeed attempted to offer himself as a sacrifice in place of the nation, but God did not allow him to do so (Exodus 32:30-35). Moses, Isaiah, and Jeremiah were all prophets who gave us a glimpse of what Messiah, the ultimate prophet, would be like, but none of them quite fit Isaiah 53.”1

1: Fred Klett, “Why Isaiah 53 Cannot Refer To The Nation Of Israel, Or Anyone Else, But Must Be The Messiah, Chaim.org, 1997, http://chaim.org/nation.htm

Why Did Jesus Cry Out “My God, My God, Why Have You Forsaken Me!?”