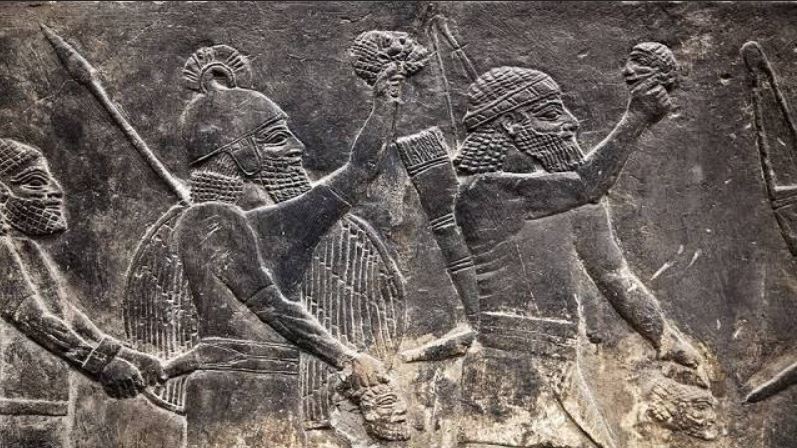 “When human beings began to increase in number on the earth and daughters were born to them, the sons of God saw that the daughters of humans were beautiful, and they married any of them they chose. Then the Lord said, ‘My Spirit will not contend with humans forever, for they are mortal; their days will be a hundred and twenty years.’ The Nephilim were on the earth in those days—and also afterward—when the sons of God went to the daughters of humans and had children by them. They were the heroes of old, men of renown.” – Genesis 6:1-4

This strange passage has been hotly debated for millennia. This passage states very briefly something that occurred prior to the flood that God sent upon wicked humanity, when Noah built the ark and saved himself and his family (along with 2 of each pair of animals). The questions this passage invoke are “Who are ‘the sons of God’?” who are “the daughters of men”? The Nephilim are the children born by “the sons of God” and “the daughters of men”, but who are they? The context seems to indicate that the Nephilim were largely responsible for why God sent the flood, but why?

Many interpreters say that the “sons of God” were the godly lineage of Seth while the “daughters of men” were the ungodly lineage. The problem with this view is that there’s nothing in the text that suggests that these are who the text is referring to. Additionally, the union between two sets of ordinary humans cannot account for why the offspring were “giants” or “heroes of old, men of renown.”. Why would Seth’s and Cain’s children produce “giants” rather than ordinary human beings?

I’m just beginning to study the Nephilim, myself. After reading “Reversing Hermon”,  I think Michael Heiser’s view that they were probably human/angel hybrids has a lot going for it. What is the Angel-Human Hybrid theory? It’s the view that fallen angels had sexual intercourse with human women who then gave birth to giants.

One thing that gives a lot of weight to this is the fact that the phrase “sons of God” is repeatedly used to refer to angels in The Old Testament (see Job 1:6; Job 2:1; Job 38:7).

I had a lively discussion about this with someone on Facebook Messenger. He brought up the objection that “I don’t think angels can have sex (or have sex organs) And if they had sex organs and could mate with humans… would they actually have viable offspring? Do they share DNA with humans too?” The objection here is that angels are incorporeal spirits, right? If they are incorporeal spirits, then how could they possibly have sex with human women? To put it crudely, you can’t have sex with a ghost. I’m not unsympathetic with this objection. This has been one of the reasons I’ve had for a long time for rejecting the angelic hybrid theory of the Nephilim.

In his book Reversing Hermon, Michael Heiser points out that angels were able to take on physical form in various times in the Old Testament. He writes “For example, Genesis 18–19 is quite clear that Yahweh Himself and two other divine beings met with Abraham in physical flesh. They ate a meal together (Genesis 18:1–8). Genesis 19:10 informs us that the two angels had to physically grab Lot and pull him back into his house to avoid harm in Sodom, something that would be hard to do if the two beings were not truly physical. Another example is Genesis 32:22–31, where we read that Jacob wrestled with a “man” (32:24), whom the text also describes as elohim twice (32:30–31). Hosea 12:3–4 refers to this incident and describes the being who wrestled with Jacob as elohim and mal’ak (“angel”). This was a physical struggle, and one that left Jacob injured (32:31–32).”.1 (Given these biblical examples of angels taking on physical form, we must conclude that it’s possible that they could take on a physical form for the purpose of reproduction. Given that we have some clear biblical examples of angels taking on physical humanoid form, any objection to the angel-hybrid theory based on the fact that angels are spirit beings won’t hold.

Another reason that most people reject the fallen angel interpretation of Genesis 6 is on the basis of what Jesus said in Matthew 22:30. In Matthew 22:30, Jesus is responding to a question brought to him by a Saducee who posed a question to him regarding the resurrection. In this passage Jesus says that when the dead are raised they will neither marry nor be given into marriage but be like the angels in Heaven. If angels neither marry nor are given into marriage, doesn’t that preclude sexual union, which is a part of marriage? Dr. Heiser responds that “The text does not say angels cannot have sexual intercourse; it says they don’t. The reason ought to be obvious. The context for the statement is the resurrection, which refers either broadly to the afterlife or, more precisely, to the final, renewed global Eden. The point is clear in either option. In the spiritual world, the realm of divine beings, there is no need for procreation. Procreation is a necessity for perpetuating the human population. Life in the perfected Edenic world also does not require maintaining the human species by having children—everyone has an immortal resurrection body. Consequently, there is no need for sex in the resurrection, just as there is no need for it in the nonhuman spiritual realm. Genesis 6 doesn’t have the spiritual realm or the final Edenic world as its context. The analogy breaks down completely. The passage in Matthew is therefore useless as a commentary on Genesis 6:1–4.”.2 Therefore, one can’t take that verse to imply that angels couldn’t temporarily acquire a physical form and mate with human females.

In The Bible, we do have two clear examples of angels eating (implying corporeality). In Genesis 19, not only did Sarah prepare them breakfast, but Lot’s wife made them dinner! Some object that we have no examples of corporeal angels reproducing and I’ll grant that. However, if angels can become physical and eat, this does at least open up the door to the possibility that they could reproduce.

According to The Book of Enoch and other non-biblical writing, they were a race of giants who did bad things. Their great size and power likely came from the mixture of demonic DNA with human genetics. I wouldn’t expect the union of an angelic fake body and a human real body to result in anything normal. Of course, the ancient authors wouldn’t have had a concept of genetics back then, and I’m not going all concordist3 on you, but this would be how one could explain their unusual physicalities in retrospect. Whatever the ancients thought accounted for their giant size, they knew sons of God + daughters of men = really big people.

Another question one must ask is why would demons do such a thing. An article on GotQuestions.org responds by saying “The Bible does not specifically give us the answer. Demons are evil, twisted beings—so nothing they do should surprise us. As to a distinct motivation, one speculation is that the demons were attempting to pollute the human bloodline in order to prevent the coming of the Messiah. God had promised that the Messiah would one day crush the head of the serpent, Satan (Genesis 3:15). The demons in Genesis 6 were possibly attempting to prevent the crushing of the serpent and make it impossible for a sinless ‘seed of the woman’ to be born.”4

3: Concordists are people who say that The Bible talks about the natural world and every place in which it does is scientifically accurate. Science should vindicate The Bible’s descriptions of the natural world. If scientists give descriptions of the natural world or posit a theory or theories, that contradict scripture’s descriptions of the natural world, then the scientists must be wrong. They misinterpreted the data. The Bible is God’s Word, whatever God’s Word teaches is true (because God Himself is perfect and infallible), so therefore The Bible cannot be wrong in what it teaches about the natural world. Given that The Bible is inspired, we should find that science increasingly affirms The Bible’s teachings. For example, many have claimed that Big Bang cosmology is taught in texts like Psalm 104:2. Accommodationists, by contrast, argue that while The Bible talks about the natural world, we shouldn’t expect it to correspond to correct science. We shouldn’t expect The Bible’s descriptions of the universe and science’s to be the same. Why? Because teaching science wasn’t a priority of God. Teaching history, theology, and morality were God’s priorities. The ancient Israelites had their own conceptions about the world and how things worked, conceptions that we now know to be false. God didn’t see fit to correct those misconceptions (which pre-existed the divine revelation btw) and instead used their faulty understanding as a springboard to teach theological truths. The Bible isn’t in error for including faulty science, because it’s simply using the cosmology of the day as a basis upon which to make theological points. The accommodationist’s claim here is that you can’t blame The Bible for error any more than you could a pastor in using Santa Claus as a springboard to teach a small child the value of being giving.

4: GotQuestions.org, “Who/What Were The Nephillim?”, https://www.gotquestions.org/Nephilim.html

Reflecting On “The Divine Council”

What Is The Divine Council And Is It Biblical?