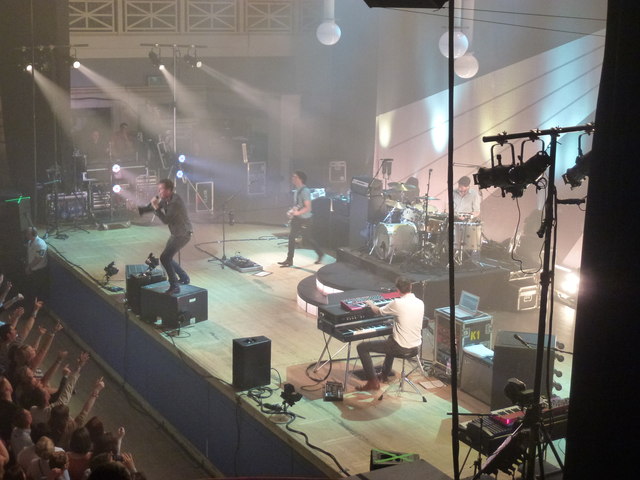 Keane in concert, The Demontfort Hall, Leicester - 6th June 2012 by Richard Humphrey is licensed under CC-BY-SA 2.0

Over the years, I’ve heard Christians complain about a handful of musical genres, calling them “evil” and “satanic” and “The Devil’s Music”. The genres they call satanic are rock, metal and rap. But can a musical genre truly be “evil”? And moreover, why would they call a type of music evil to begin with? What’s their reasons for saying these things? Well, some of the things I’ve heard was that rockers often times use drugs. Well, is that sufficient for condemning a Christian for listening to it? I don’t think so. Maybe it’s because they use curse words a lot. I mean, I went to a Three Days Grace concert a few years ago and the singer (which was Adam Gontier back then but not anymore, he left), when he was talking on stage in between songs, cursed a lot. I mean, he dropped so many F bombs, it was rediculous. Three Days Grace’ song lyrics don’t have that many curse words at all, but the amount of cursing Adam did on state while speaking to the audience was immense. Maybe they think rock is evil because sometimes they sing about violent things. Limp Bizkit’s “Break Stuff” was pretty much all about being angry and beating someone up, and it was riddled with curse words. Disturbed’s lyrics have some pretty dark content. “Inside The Fire” was about a girl who committed suicide and went to Hell for it. The devil came and tempted him to commit suicide himself. “Like An Animal” by Nine Inch Nails is an extremely sexual song and Nickleback’s “Something In Your Mouth” is, at least from my interpretation of the lyrics, about oral sex with a stripper. I can kind of see their point on why they wouldn’t want their children or their friends listening to these things and why they themselves avoid it. Philippians 4:8 says “whatever is true, whatever
is noble, whatever is right, whatever is pure, whatever is lovely,
whatever is admirable—if anything is excellent or praiseworthy—think
about such things.” Nevertheless, these are just examples of the sin glorifying or dark contented lyrical songs. There are other songs by these same groups that have songs I don’t mind at all.

But does this really make ROCK itself sinful? Maybe those are good arguments against listening to SECULAR rock music. But what about CHRISTIAN rock music? Bands like Skillet, Red, Kutless, Demon Hunter, Hawk Nelson, Switchfoot, For Today, Flyleaf etc.? Are listening to these bands sinful? Their lyrics have no curse words whatsoever, they never sing any songs with sexual content, etc. HOWEVER, these Christians that contend that listening to rock music is sinful don’t just limit their condemnation to secular rock music but rather they say that even listen to Christian Rock music is sinful. They don’t merely condemn the lyrical content of the songs or the lifestyles of those who produce the music. They condemn the genre itself. But why is this?

1: There is no genre of music that is inherently sinful.
It doesn’t seem to me that any genre of music is intrinsically immoral. It’s just music. If there were no lyrics whatsoever, all you’d be left with is guitars, a bass and drums (sometimes even violins and pianos to supplement the former). What’s wrong with that? How is listening to that combination of certain musical instruments immoral? Why would God be angry at me listening to that particular combination of instruments? It doesn’t make any sense to me.

2: As with other tools, the goodness/badness of music depends upon how the thing is used.

Knives are used for cutting things. A knife however is neither good nor evil. It’s just a tool. You can use it for good or evil, but whether or not the knife is used for good or evil depends wholly upon the user. You can use it to chop up vegetables to feed hungry children or you can use it to stab someone to death.The knife that chopped up vegetables to feed hungry children is not morally good, YOU’RE morally good. Likewise, if you used the knife to kill someone, the knife is not morally evil. It would be you that is evil. The knife is just a tool. In the same way, instruments can be used to glorify God or glorify Satan or sin. But it all depends on who uses them.

3: It is lyrics which determine the acceptability of music for a Christian.

Now, I can understand why you wouldn’t want your children or friends
to listen to songs that glorify sins, but if the lyrics glorify
God/Jesus instead, why would you be against that? If a band devotes the
majority of their songs to singing about spiritual matters which glorify
The Lord, then this appears to be Philippians 4:8 approved. You’re
dwelling on lyrics which speak about “true, noble, right, pure, lovely,
admirable, excellent, and praiseworthy” things. Music is just music. It
is neither good, nor evil. It just is. Song lyrics on the other hand can
be good or bad and it can be sinful to dwell on such things if
they glorify sin or ok if they glorify God, but music itself is morally neutral.

Again,
LYRICS can be Philippians 4:8 approved or not, music is morally
neutral. It’s just sound. Or, you could say “It’s just NOISE” if you happen to not like that
genre because it doesn’t sound good to you, and that’s fine, I mean,
I’m not a fan of opera. It’s ok to dislike a genre of music because you
don’t care for the sound. I don’t like opera, but I wouldn’t say it’s
sinful to listen to it.

Moreover, The Psalmists used the latest instruments when they composed the songs therein. For example, Psalm 150, and Psalm 98.

“Sing to the Lord a new song, for he has done marvelous things; his right hand and his holy arm have worked salvation for him. The Lord has made his salvation known and revealed his righteousness to the nations. He has remembered his love and his faithfulness to Israel; all the ends of the earth have seen the salvation of our God. Shout for joy to the Lord, all the earth, burst into jubilant song with music; make music to the Lord with the harp, with the harp and the sound of singing, with trumpets and the blast of the ram’s horn— shout for joy before the Lord, the King, Let the sea resound, and everything in it, the world, and all who live in it. Let the rivers clap their hands, let the mountains sing together for joy; let them sing before the Lord, for he comes to judge the earth. He will judge the world in righteousness and the peoples with equity.” – Psalm 98

In summary:
Arguments for the use of Rock in Christian contexts

1) There is no such thing as a genre that is inherently evil.
2) As with other tools, the goodness/badness of music depends upon how the thing is used.
3) It is lyrics which determine the acceptability of music for a Christian.

1) The Psalmists used the latest instruments when they composed the songs therein (see Psalm 150; and Psalm 98)
2) We are commanded to make a loud/joyful noise to the Lord (Psalm 98)

1) At points in the past, the organ was thought to be evil.
Christians should not embarass themselves once more by wasting energy
arguing against an instrument. Instead, our energies should be devoted
to witnessing and answering those who ask about our faith (1 Peter 3:15)

Things Christians Should Think About During Hard Times