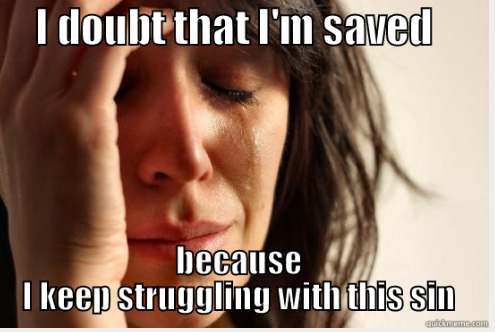 Some Christians struggle with a sin, perhaps masturbation addiction, alcohol addiction, a bad cursing habit, or what have you, and they worry whether or not they’re actually saved because they keep doing this sin over and over and over and over. They try not to do it, they really try, but no matter how hard they try just can’t shake this bad habit. I’m very sympathetic to these people. I know exactly what this is like. The reason these people feel like they’re not saved comes from passages in scripture which seem to suggest as much. For example, Hebrews 10:26 says “Dear friends, if we deliberately continue sinning after we have received
knowledge of the truth, there is no longer any sacrifice that will
cover these sins.”

1 John 3:6-9 says “No one who lives in him keeps on sinning. No one who continues to sin has either seen him or known him. Dear children, don’t let anyone deceive you about this: When people do
what is right, it shows that they are righteous, even as Christ is
righteous. Whoever makes a practice of sinning Is Of The Devil, for the devil has
been sinning from the beginning. The reason the Son of God appeared was
to destroy the works of the devil. Those who have been born into God’s family do not make a practice of
sinning, because God’s life is in them. So they can’t keep on sinning,
because they are children of God.”

So, what so we make of these verses? Are these Christians right? Are they not really saved just because they keep doing the same thing over and over? I don’t think so. Not necessarily at least. What The Bible is talking about in all of these instances is a purposeful immoral life. Hebrews 10:26 says “If we continue deliberately sinning….” The key word in this passage is “deliberately” which means “on purpose” or to go out of your way to sin. This passage is talking about people who receive The Holy Spirit, they’ve received Jesus Christ as their Lord and Savior and yet at some point in their walk with Christ they decide to commit sins on purpose, not caring about whether or not their actions please or displeases Jesus. Now, this passage is used by many Arminians to support their argument that it’s possible for a person to lose their salvation, and I would certainly agree that this passage certainly seems to be saying that apostasy is a real possibility. People who argue that you can’t lose your salvation would say that if a person deliberately sins, they were never really saved in the first place since a truly saved person would never desire to return to their unbelief.  This is a different issue altogether and it’s not the point of this post to defend either position on whether one can lose their salvation or not. To tell you the truth, I’m not sure where I stand on the issue myself. On the one hand, there are many passages which seem to suggest you can apostatize after being genuinely saved (such as Hebrews 10) but there are other passages which seem to suggest you can’t (such as John 10:28-29). But my point is, the passage is addressing people who sin on purpose and don’t even try to do otherwise.

The verses in 1 John 3 are also talking about deliberately sinning even though the apostle John doesn’t use the word “deliberately”. But what John does say is that if we make a practice of sinning, we are not saved. There’s a difference between committing sin and practicing sin. Committing sin is when you occasionally stumble in your walk with Christ into sin. Practicing sin is sinning on a repeated, ongoing basis without any care at all about whether or not what you’re doing is evil or immoral. For example, someone who’s seduced into sleeping with a woman commits a sin, but he’s not practicing sin, he just fell in a moment of weakness. Contrast that with a person who goes and hires a prostitute on a weekly basis. He purposefully goes out of his way to find a woman (who he doesn’t even know) to fornicate with! The person in the latter example is practicing sin. Obviously he’s not saved.

One of the signs of a born
again Christian is that even if he doesn’t have victory over his sins,
he fights those sins mightily until the day he dies. Why? Because a truly
born again Christian finds his faults and his sins appalling. He won’t
be able to help but war against his flesh because now he no longer
desires to sin, he desires to do the will of God. If you sin, confess
your sins to God and He will forgive you (1 John 1:9). Get back up and
try again. The very fact that you’re concerned about it and want to obey
the commands of Christ in scripture is evidence that you are saved.
Non-saved people don’t care about whether they sin or not. Only God’s
children worry about whether they are living the way He intended for
them to

We will continue to stumble until the day we die. That doesn’t mean we
shouldn’t TRY not to sin. As I said, a truly born again Christian won’t
be able to help but fight against his evil desires because his sin will
stink to him, being a new creation in Christ.﻿ In this life, we’ll always find some fault in ourselves, but in the sanctification process, Jesus will have transformed us. We will have victory over certain bad habits in this life. It may take a while, but I’m confident we will find the way. Jesus won’t leave us in our bondage.

The Apostle Paul struggled with sin as well. He wrote in his letter to the Romans,

“So I find this law at work: Although I want to do good, evil is right there with me. For in my inner being I delight in God’s law; but I see another law at work in me, waging war against the law of my mind and making me a prisoner of the law of sin at work within me. What a wretched man I am! Who will rescue me from this body that is subject to death? Thanks be to God, who delivers me through Jesus Christ our Lord! So then, I myself in my mind am a slave to God’s law, but in my sinful nature a slave to the law of sin.” – Romans 7:23-25

Paul said that he did what he did not want to do, and that he did not do what he wanted to do. I think every or most Christians can relate to that passage. Paul was truly saved, in fact he was chosen by Jesus to be a witness to the gentiles, but he still wrestled with the flesh. We don’t know what sin or sins Paul was struggling with. The Bible doesn’t say. But that doesn’t matter to the point I’m trying to make. The point is, even if we’re losing the battles with our sin, the very fact that we’re fighting against them is evidence that we’re saved because unsaved people are apathetic about their sins. Paul was saved, that’s why he confessed his frustration in continuing to lose the battle against his flesh in his letter to the Romans. Certain sins that I struggle with now that were left over from my life before I knew Christ reminds me of this fact. Before I knew Christ, I didn’t care whether they were sins or not, after I came to Christ, I cared very much because I wanted to please Jesus and wanted His approval in all that I did. Moreover, I must stress again that sanctification is a slow process. Whatever sins we’re losing the battle with now, we will most likely win later. For example, a Christian may struggle with masturbation addiction or cursing for years until he finally conquers it. We just need to be patient, we need to trust Jesus, and we need to never give up the fight. Not giving up hope is the hardest part. When you’ve been defeated over and over and over and over (in any area of your life), it’s hard not to give into defeatism. But we mustn’t give up the fight! We must fight on! We must not quit! Fighting against the sin nature is the best way to love Jesus with all of our strength (Deuteronomy 6:5, Matthew 22:37-38, Mark 12:30, Luke 10:25-28).

If you’re struggling with a bad habit you just can’t seem to shake, I have some book recommendations that might help you. These books by no means are a substitute for Christian counseling, but that doesn’t mean they won’t be helpful to you.

*“The Willpower Instinct” by Dr. Kelly Mcgonial
*“The Bondage Breaker” by Neil T Anderson
*”Delivered By Desire” by  Daryl Wingerd
*“Every Man’s Battle”  by David Afterburn and Fred Stoeker
*“Everyone’s Guide To Demons and Spiritual Warfare” by Ron Phillips
*And of course, “The Bible”.

“if anyone does sin, we have an advocate who pleads our case before the
Father. He is Jesus Christ, the one who is truly righteous.” – 1 John 2:1

We are not to make practice of sin (1 John 3:6-9), but if we do sin, we have an advocate to intercede to God The Father for us (1 John 2:1) and fortunately, if we confess our sins to Him (1 John 1:9) and truly feel remorseful for what we’ve done, with every intention to turn away from our wrong doing (Isaiah 55:7), Jesus will forgive us of our sins and cleanse us with the blood that He shed for us on the cross.

Q&A: On The Importance Of Biblical Inerrancy

What Are Sins Of Omisson?