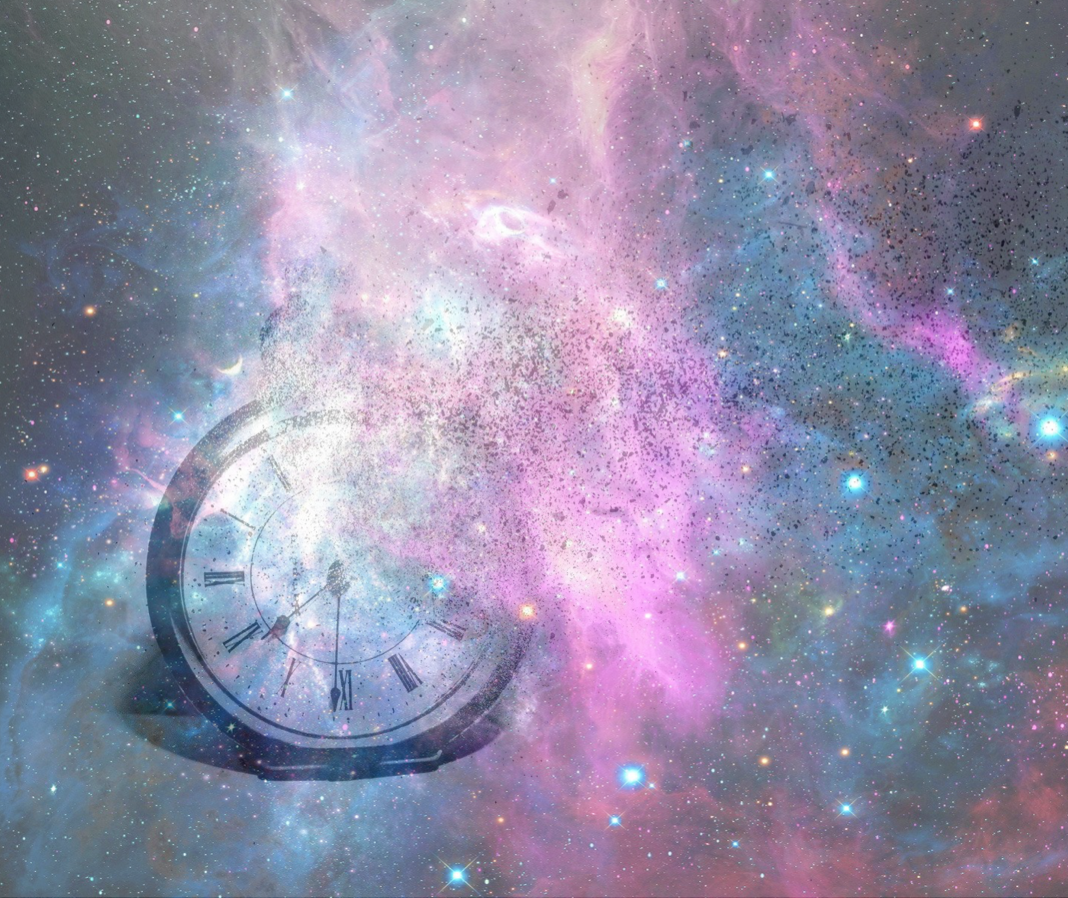 In his essay “Finitism and the Beginning of the Universe”, Stephen Puryear [2014] says that defenders of The Kalam Cosmological Argument (of which William Lane Craig is perhaps the most prominent), have argued that the past must be finite in duration because otherwise the present could have never arrived. This is so because it impossible to “traverse the infinite”. To get to today, the universe would have had to traverse an infinite number of past events, and this is impossible, argues Craig. In “Finitism and The Beginning Of The Universe”, Puryear tells his readers that other philosophers have replied to this argument by saying essentially “Hey, actual infinities are traversed all the time!” One example that Puryear notes is whenever an object moves from one location in space to another. Another example he gives is “Whenever some period of time elapses, an actual infinite has been traversed, namely, the actual infinity of instants that make up that period of time. Once again, it cannot be denied that actual infinities are completable. So the finitist scruples upon which the argument against an eternal past rests are misguided. The argument fails.”1

Peryear thinks that Kalam proponents like myself need to do the following:

(1) Claim that actual infinities are NOT traversed in nature because space, time, and other continuous wholes divide into parts only in so far as we divide them in thought and thus divide into only a finite number of parts,

(2) claim that space, time, and change (events) are discrete.

Puryear says that the second objection is widely rejected in the philosophical community. He doesn’t set out to prove the second option is not a viable one for KCA opponents, rather he sets his sights on the first option. He points out that KCA proponents like Dr. William Lane Craig have made this response, and he goes on to concede the point in order to subvert it against the argument that you cannot reach the present in a beginningless universe because you’d have to traverse an actually infinite number of moments.

I first encountered Stephen Puryear’s essay in the book “The Kalam Cosmological Argument, Volume 1: Philosophical Arguments for the Finitude of the Past (Bloomsbury Studies in Philosophy of Religion)” It’s a collection of essays on the Kalam argument by both proponents and opponents, and it was edited by philosophers Paul Copan and William Lane Craig.

I have to commend Puryear for giving me an argument against the Kalam that I actually felt was rather forceful! No atheist has been able to give an objection that actually bothered me (and that I hadn’t already heard before) in a VERY long time! But as I thought about it, pacing back and forth in my backyard muttering to myself like someone who had just lost his sanity, I eventually came to the conclusion that it isn’t a true a defeater.

The Argument Expanded Upon

Stephen Peryear writes that “This objection has merit, but it is not insuperable. In the first place, it assumes that finite magnitudes of space and time are composed of an infinite number of parts, whether unextended, like points or instants, or extended but simple. This yields the result that between any two points in space or time, there is an infinity of intervening parts that must be traversed in order to proceed from the one point to the other. But the finitist need not go along with this. She might instead affirm that space and time are quantized such that any finite spatial or temporal magnitude has only a finite number of minimal parts. On such a view, moving from one point to another would involve moving through only a finite number of intervening spaces, and any finite length of time would involve the occurrence of only a finite number of moments or chronons. In neither case would motion or the passing of time involve completing an infinite. ….

According to this second line, space and time are indeed continuous, but it does not follow that between any two points in space or time there is an actual infinity of intervening parts or points. Instead, there is only a potential infinity of such parts. What makes such a position possible is the view that space and time and other continuous wholes are not composed of their parts but are instead prior to those parts. Consider the example of a line. It may strike us as natural to think of this line as composed of an infinity of points or infinitesimal line segments set end-to-end, in much the way that a house is composed of bricks. On the alternative view, however, the line is a whole which exists prior to any parts we may discern within it. Rather than being composed of these parts, the line is (in itself) a single whole from which parts are formed when a mind conceives of it as divided. Thus, given that finite minds can only mentally divide a whole a finite number of times, it follows that no continuous whole ever has more than a finite number of parts. More to the point, it follows that motion and the passage of time do not involve traversing an actual infinite, only a potential infinite. Once again, finitism is safe.”2

Dr. William Lane Craig said “[T]ime, like space, is infinitely divisible in the sense that division can proceed indefinitely, but time is never actually infinitely divided, neither does one arrive at an instantaneous point. If one thinks of a geometrical line as logically prior to any points which one may care to specify on it rather than as a construction built up out of points (itself a paradoxical notion), then one’s ability to specify certain points, like the halfway point along a certain distance, does not imply that such points actually exist independently of our specification of them . . . By contrast, if we think of the line as logically prior to any points designated on it, then it is not an ordered aggregate of points nor actually infinitely divided. Time as duration is then logically prior to the (potentially infinite) divisions we make of it.”3

The reason I found this argument forceful is that I really have always thought that time increments were man made inventions of measuring time, that while time was objectively real, it was never divided up into the “chonons” we have labeled “seconds”, “minutes”, “years” and so on. There is no such thing as “a day”. There is such a thing as one Earth rotation which we have then decided to call a “day”, but mankind could have arbitrarily decided to label 2 or 3 sun rotations “day”. These are useful fictions for helping us maintain a healthy schedule in lives.

Somehow I just never made a connection between this view of mine that time increments are useful fictions and what implications that could have for the Kalam Cosmological Argument.

You don’t need to be committed to dividing time up into various metrics (seconds, minutes, hours, years, et. al) in order for the argument from successive addition to go through. Andrew Loke in his own response to Stephen Puryear points out that a relational view of time is relevant. If you hold to a relational view of time (as William Lane Craig, Andrew Loke, and myself do), then you can simply number the past by means of these earlier-than and later-than relations.4 For example, a moon that is orbiting a planet makes several orbits around said planet every 24 hours. In an eternal universe, let’s say it has always been orbiting and always will be orbiting. We don’t need the metric of “24 hours” to say that there have indeed been a real number of orbits around the planet, and that some orbits are in the “Earlier than” category and some are in the “Later than” category. No, time metrics be damned, there are still some (infinitely many in an eternal universe) orbits that happened earlier than the one that is currently happening.

Or let’s say that there’s a meteor that travels between one galaxy to another once every two billion years. I don’t know if meteors can travel between galaxies, but let’s assume they can for the sake of the thought experiment. The meteor goes from Galaxy A to Galaxy B, and when it reaches Galaxy B, it turns around and heads back to Galaxy A. Once it reaches Galaxy A, it turns around and starts moving towards Galaxy B again. In this case, some of the moments at which the meteor is at Galaxy A are earlier than the times in which the meteor is at Galaxy B. Some are yet to come in the future. In an eternal universe, the number of times that the meteor would have traveled to Galaxy A and the number of times it traveled to Galaxy B would be actually infinite.

So the problem of traversing an actual infinite rears its ugly head again.

And so, contra Puryear, the argument of Craig’s that time as duration is logically prior to the potentially infinite divisions that we make of it, doesn’t in fact undermine the very argument it was meant to save.

You can still talk about the argument against actual infinites using time metrics (seconds, minutes, hours, days, etc.), as I often have, but we would have to acknowledge that talk of infinite past seconds and minutes and so on are merely a heuristic device. That is to say; it’s easier to talk about the actually infinite past number of temporal relations between the objects that make up the physical universe if we speak in time metrics than to go out of our way to describe the physical temporal relations themselves. It would be like when we speak of “Sunrise” and “Sunset” rather than giving a cumbersome description about the Earth’s rotation and time zones. In order to properly speak of the natural event, you need not commit yourself to the sun doing literally anything (either rising or setting). Likewise, to give the argument that there cannot be an infinite past if that past has been formed by successive addition, you need not commit yourself to time being divisible by parts such as seconds, hours, months, etc. in order to speak of seconds, hours, months, etc.

So if the past is numbered by a series of relational changes of “earlier than/later than”, then it seems to me like this sucks the force right out of Puryear’s objection.

1: The Kalam Cosmological Argument, Volume 1: Philosophical Arguments for the Finitude of the Past (Bloomsbury Studies in Philosophy of Religion) (p. 208). Bloomsbury Publishing. Kindle Edition.

2: The Kalam Cosmological Argument, Volume 1: Philosophical Arguments for the Finitude of the Past (Bloomsbury Studies in Philosophy of Religion) (pp. 209-210). Bloomsbury Publishing. Kindle Edition

4: “ON FINITISM AND THE BEGINNING OF THE UNIVERSE: A REPLY TO STEPHEN PURYEAR” by Andrew Ter Ern Loke. —https://www.researchgate.net/publication/282430994_On_Finitism_and_the_Beginning_of_the_Universe_A_Reply_to_Stephen_Puryear