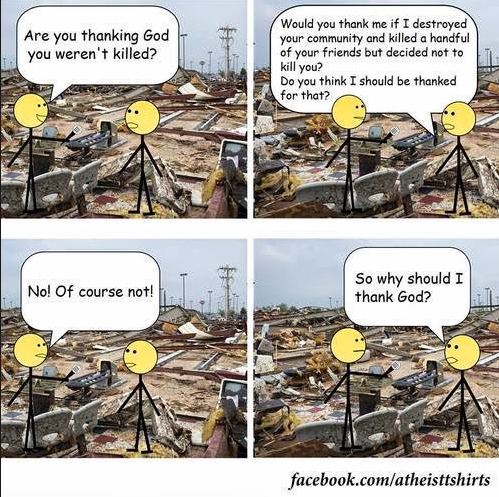 An atheist I follow on Google+ posted this on his wall, and while I don’t usually respond to memes or comics/cartoons, I thought I’d take the time to respond to this one. I’m going to put myself in the place of the character on the left and continue where the skeptic in the comic strip left off. First off, the skeptic in the comic strip likens God to a man who destroys your entire community and a handful of your friends but leaves you left alive and his point is that THANKING that man for sparing you (while killing all the others) would be irrational. First off, I don’t believe causes natural disasters to occur. He can have control over the forces of nature and so it’s entirely possible for Him to take over the natural forces and cause a natural disaster to occur on a town, city, or nation in judgment, punishing them for evil (just think of the Noah’s ark flood for example), and some crazy Christians conclude that all natural disasters are God’s righteous judgment upon wicked people. This is also not true. The book of Job shows us quite clearly that not all the suffering we go through is God’s punishment on us. Indeed. The Bible teaches that for believers, He works all things for our good (Romans 8:28). But anyway, my point is that natural disasters are not caused by God necessarily. Sometimes they are, but it’s most likely the workings of nature. Click the link to see that natural disasters can actually be used for a good purpose.

Here’s an illustration. I’m not married but let’s pretend that I am for the sake of the illustration. Let’s pretend I have a wife, we’ll call Jennifer. It’s NOT immoral for me to have sex with Jennifer. Why? Because she’s my wife! I have the right to have sex with her if I (and she) wants to. But if YOU had sex with Jennifer, that would be immoral. That would be adultery. Why? Because you’re not Jennifer’s husband, therefore you don’t have the right to sleep with Jennifer like I do. I AM her husband so I have the right to sleep with her when she and I want to and I commit no sin in doing so. But you’re not Jennifer’s husband, so you have no right to have sex with Jennifer whenever you want to. So it’s immoral for you but not for me, simply because of who we are, i.e Jennifer’s husband (me) and not Jennifer’s husband (you). Likewise, when God ends the physical life of a human being, it’s not immoral for Him to do it because of who He is (i.e the author of life) but it would be very much immoral for you to end the physical life of that human being because of who you are (i.e not the author of life). There’s another illustration I use that involves a land lord and a house for rent, but I won’t get into that right now. I think this illustration is enough to make my point. Moreover, God sometimes ends physical lives but He never takes a person out of existence. He keeps their soul in existence for all eternity and places their soul either in Heaven or Hell until He resurrects them and puts them in a brand new physical body that’s far better than the physical body they had before.

But to the point of the comic strip character’s question. Why would I thank God for allowing me to live while allowing my community to be destroyed and allowing some of my friends to die. Well, for the Christian, this life is just one small blip of our existence. We look forward to an eternity of joy and happiness in Heaven, with no pain or sorrow for the rest of our infinite existence. We also hold that material goods, while good things to have, are not all there is to life. If my friends/family were Christian believers, I would hurt greatly because I would separated for them until the day I die….I would miss them terribly. But I wouldn’t mourn for THEM. I wouldn’t be sad for them, but I would merely be sad for myself. Why? Because, being Christians, it means they went home. The apostle Paul said that “To live is Christ and to die is gain” (Philippians 1:21). The Bible says that to die is gain! For those who love Jesus, death is actually a reward! We get to meet The Lord face to face! We get enter into an eternity of glory and paradise with no more sorrow or pain whatsoever (Revelation 21:4).

However, the Christian doesn’t want to die. He doesn’t live his life constantly longing for death. The Christian wants to be in this world for quite a while to come. On the other hand He does long for the kingdom of Heaven. He doesn’t want to die, but he very much wants to go to Heaven. He has a conflicting desire. There are reasons for this. This was explained nicely in the article “The Christian’s Conflicting Desires”

Although it’d be great to go to Heaven right now and I would
love to be there so much, There are several reasons why I don’t want my
physical life to end just yet.
For 1: the people who love me would be sad if I left them.
When my grandmother died, I knew that she went to Heaven to be with Jesus, but
I was also aware that it would probably be a good 60-70-80 years before I
myself would go to Heaven. It would probably be a long time before I would ever
see her again…and so, I was sad. I had no idea when I would die, but I knew the
average lifespan of a human being.
2: I have things I want to do here FIRST before I die, for
example; to spread the message of God’s love and lead people into a
relationship with Christ. I’d also like to get married someday and have children. There are some things I can only do for God here that I can’t do if I were to just die now and went on up into Heaven. What’s more, I would like to see how my favorite TV shows end? How does the Bleach anime end for example. 😉 😉
Paul had this dilemma in Philippians 1:21-23

“For me, to live is Christ and to die is gain. But if I
live, I can do more fruitful work for Christ. So I really don’t know which is
better. I’m torn between two desires: I long to go and be with Christ, which
would be far better for me.” His statement of longing for Christ to be glorified in him whether he lives or dies (Phil. 1:20)
prompts Paul to “think out loud,” as it were, about the prospect of
life and death in today’s passage. Specifically, the apostle considers
whether it would be better to go on for many more years in this world or
to pass at once into glory, illustrating the conflicting desires within
the heart of every believer.

So, why would I thank God for allowing me to survive? For a different reason for me thanking Him for letting me die of course. Given God let me survive, it would mean that I would have more opportunities to share the gospel with unbelievers. It would mean more opportunities to do good for the poor, the needy and the emotionally weak. It would mean those who love me would not be sad at my passing, in addition to many other things. Either way, as a child of God, I WIN! I either perish in the natural disaster and praise Jesus IN HIS PRESENCE IN HEAVEN or I get to continue to be one of God’s messengers spreading the good news of God’s salvation, spending time with my loved ones, etc. etc. etc. For a child of God, singing Jesus’ praises for their survival makes as much sense as praising Him after death.

A related blogpost –> “The Problem Of Evil and Suffering”

Revision To The Three Circles Model?

Why Doesn’t God Reveal The Reasons Why He Permits Suffering?