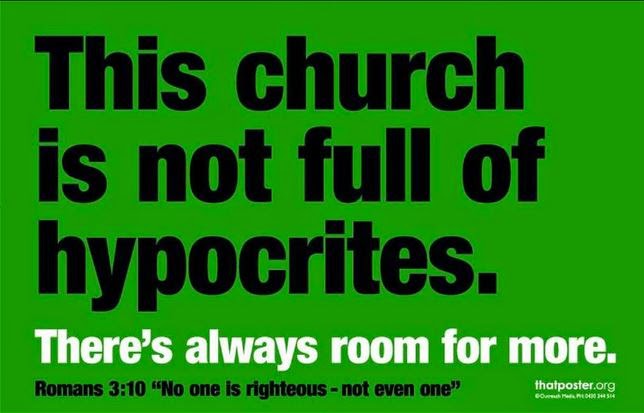 One charge that has been lodged at Christians over the years is that we’re all just a bunch of hypocrites. We don’t practice what we preach. We preach love and mercy, but scorn those with different ideas or views. Some people refuse to become Christians because of that. Some people even refuse to go to church because of that. I will admit that there are people who claim to be Christians but live in ways that sometimes are no better than that of an unbeliever, or sometimes is worse than unbeliever (sometimes the unbeliever is living a more moral lifestyle than the believer)! What are we to make of this?

FIRST OFF, THE TRUTH OF A WORLDVIEW HAS NOTHING TO DO WITH THE CHARACTER OF THOSE WHO ADHERE TO IT.

In our search for truth, we must be guided by the facts. Even if the person making a truth claim is arrogant, abusive, unintelligent, smelly, or otherwise deficient in character, we must judge the claim based on its own merits. If we don’t, we commit the ad hominem fallacy.

However, since many unbelievers do judge Christianity based on the character of Christians, I beseech every one of my brothers and sisters reading this to stay close to Christ. Pray to the Lord that you may produce many fruits of The Holy Spirit (Galatians 5:22-23), that you may do many good works so that unbelievers may see your good works and praise our Father in Heaven (Matthew 5:16), and ultimately, love one another so that they will see that we are true disciples of Christ (John 13:35).

Jesus showed no tolerance towards those who did not practice what they preached. On a few occasions He gave the Pharisees (the religious leaders of Jesus’ day) a serious tongue lashing because of the outrage He had towards their hypocrisy. One of the longest and most scathing of these is found in Matthew 23. I’m not going to include the entire chapter for the sake of brevity, but I will show some of it.

Before Jesus openly rebuked the Pharisees, He warned His followers to do what they told them to do, but not to imitate their lifestyle. What the religious leaders taught was right. The problem was, they didn’t behave according to their own teaching. (see Matthew 23:1-11)

Then Jesus turned to the religious leaders and gave the scathing tongue lashing.

If you are a non-believer and see a Christian who is a hypocrite, and you feel disgusted by their hypocrisy, you’re in good company. Hypocrisy disgusted Jesus too. Jesus would be just as disgusted as you are at people who claim to be Christians and yet bully homosexuals, or might turn away someone from their church because they’re covered in tattoos, or treats you unkindly because you’re, say, an atheist or whatever. Jesus condemns self righteousness. He condemns being unkind to lost sinners. He condemns the turning away of anyone who might be spiritually seeking.

THE BIBLE TEACHES THAT ALL PEOPLE ARE SINNERS

One of the reasons Christians, even the ones who are doing in general what Jesus wants them to, for the most part, tend to do what a Christian shouldn’t do is because all men are sinners. The Bible teaches that everyone is a sinner (Romans 3:23, Psalm 14:1-2, Proverbs 20:9, Ecclesiastes 7:20, Job 9:2-4). We’ve all inherited a sinful nature from the first two human beings, Adam and Eve (see Romans 5, Psalm 51). Therefore, because of this sinful nature, we have a natural inclination towards wrong doing. Because of the sin nature, we have a natural leaning towards doing things that God disapproves of. However, when we come to Christ, we are “born again” which means to become a brand new person in Christ (John 3, 2 Corinthians 5:17). Over time, the longer we’re Christians, the more we pray and study scripture, we’ll become better and better people over time. This is a process known as sanctification. Nobody’s perfect. Not even the most devout Christians. But those who truly love the Lord seek to do His will. Those who truly love The Lord will try their hardest to please God and to not do anything that displeases Him (see John 14:15, 1 John 5:2-5). The longer we’re Christians, the longer we develop our relationship with God, and the closer we get to Him, over time we’ll start producing the fruits of The Holy Spirit (Galatians 5:22-23). Sanctification is a slow process.

Even if you are right that most or all Christians are hypocrites, why should that stop you from becoming one of the few NON-hypocritical ones? Don’t forget that the truth of a worldview/religion has no bearing on the character of those who adhere to it. But moreover, you could become a Christian yourself and be an example to those are hypocrites. God can use you to change His church into what He wants it to be.

Is It Arrogant To Claim To Know What God Is Thinking?