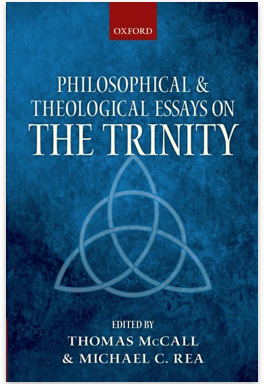 This is an absolutely fantastic work on the philosophical issue of the threeness-oneness problem regarding the doctrine of The Trinity. What I liked the most about this was the back and forth essay debate between the Social Trinitarian model of William Lane Craig’s and J.P Moreland’s, which I myself embrace. There is an essay in chapter 5 which is taken from Craig’s and Moreland’s “Philosophical Foundation For A Christian Worldview” titled “Toward a More Tenable Social Trinitarianism” in which they present their model. In chapter 6, Howard-Snyder criticizes Moreland and Craig’s proposal, and In chapter 7, “Another Glance At Trinity Monotheism”, William Lane Craig rebuts Howard Snyder. I find Synder’s objections rather weak and I think Craig and Moreland’s proposal for defending the coherence of the doctrine of The Trinity, and with their model of Social Trinitarianism which does so, the best way to account for the Trinity. I find myself unsatisfied with the Latin Trinitarianism defended by contributors like Brian Leftow.

The only forceful objection to Craig and Moreland’s model (and Social Trinitarianism in general) that I see is the “Diminished Divinity” objection. Since The Trinity is only a 100% instantiation of the divine nature, and the persons of the Trinity themselves are not trinities in their own right, can it really be said that any one person has the fullness of deity? I don’t really feel the force of the other objections and find that Social Trinitarians like William Lane Craig and Richard Swinburne do a good job of responding to.

With several different viewpoints, and with contributors of this book interacting with each other’s essays, it feels sort of like an Academic version of a Zondervan “Counterpoints” book. For anyone interested in reading about the doctrine of The Trinity from a philosophical angle, this book is for you.

This is a scholarly book, so not written for the layman. I found it not too difficult to understand, but I don’t think I’m the best person to consult on this because I’ve read so much philosophy in general that I am the autodidactic equivalent of someone who has a background in philosophy. I would guess for someone who’s never picked up a philosophy book in their life (much less one about so about the NATURE OF GOD), that the content of this book with sound like gobbledygook. “Scholar Babble” as I like to call it. But it didn’t sound like gobbledygook to me, probably because, like I said, I’m pretty immersed in philosophical literature already. I don’t think you need a PH.D to understand this material, but neither is this for the person who’s getting his feet wet in the world of philosophical theology through books like “On Guard” and “I Don’t Have Enough Faith To Be An Atheist”. All I can advise is that you discern your own educational level and judge for yourself whether you’re ready for a book like this.