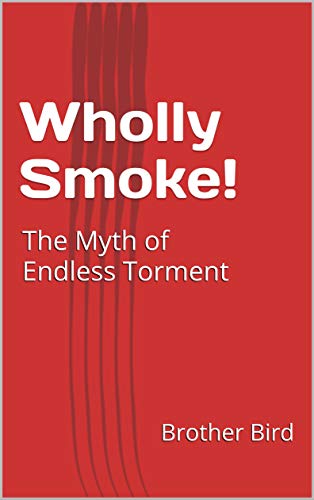 “Wholly Smoke!: The Myth Of Endless Torment” by Brother Bird is an comprehensive, easily accessible defense of conditional immortality a.k.a annihilationism. Bird shows in chapter after chapter how the teaching that the damned are “destroyed” (Psalm 37:38, Psalm 94:23, 2 Peter 3:7, Jude 1:10), “perish” (John 3:16, 2 Peter 3:9), “burned up” (Matthew 3:6 12), are “destroyed in both body and soul” (Matthew 10:28), reduced to ashes like Sodom and Gomorrah, being made an example of what is to happen to the ungodly on the day of judgment (2 Peter 2:6, Jude 7), is found on virtually every page of The Bible. Whenever the final judgment of the wicked is talked about, it uses various different ways of saying the wicked will be destroyed. Bird quotes so many scriptures across the first 10 of its 36 chapters alone that I can’t envision someone not being convinced by the time they put it down! I say this as someone who is already a conditionalist/annihilationist. However, I think if I were a traditionalist when I read this book, I wouldn’t be anymore.

Bird leaves no stone left unturned. In chapter 1, Bird says that his “heresy” is believing John 3:16. John 3:16 says “For God so loved the world that He gave His one and only Son, that whosoever believes in Him will not perish, but have eternal life.” And in chapter 3, he does a word study of the word “perish” in both testaments to show that whenever it is used, it is consistently used to talk about a thing’s destruction or ceasing to be, specifically someone’s life coming to an end. Without exception, outside of The Hell debate, “perish”, “perishing”, “perished” and any other variations I might have missed always means to be killed, to die, to have one’s life come to an end. How odd then, that when it comes to John 3:16, we contort language so that “perish” doesn’t mean what it always means everywhere else? Instead, in THIS verse, “perish” means something like to undergo a never ending process of perishing in tormenting fire. This is not a straw man of eternal torment advocates. Having heard sermons on judgments for my whole Christian life, I’ve heard just this sort of rationale live and in person. Moreover, in my own book on Hell, “A Hellacious Doctrine” I quote people like Paul Helm and J.I Packer – reputable theologians, not quacks – who actually give this ridiculous explanation themselves! And alas, I myself rationalized the text this way for many years. Why? Because I felt I had to. Because “The Bible CLEARLY says”.

Well, actually, no. The Bible doesn’t clearly teach eternal consious torment. In chapter 5, Brother Bird talks about the problem of “assumed errors”. Bird says that a lot of the things Christians believe weren’t arrived at through careful exegesis or rigorous Bible study, but are simply presumed and then read into the text. We are told “The Bible says X” by our pastors, parents, favorite theologians and Bible teachers, and then we open our Bibles expecting to find X, and “Surprise! Surprise! Surprise!” to quote Gomer Pile. We find exactly what we are told we would find! Any passages of scripture that don’t line up with what our preacher or church told us The Bible says, we either label “problem passages” or we shrug our shoulders not knowing what to do with them. I’ve had many, many, many filters of traditions removed from my eyes on so many different topics; Genesis 1-3, eschatology, The Divine Council and Deuteronomy 32 worldviews in The Old Testament, and, of course, the doctrine of Hell. In fact, I credit the ease of which I changed my mind on the doctrine of Hell to two factors: (1) the sheer strength of the biblical evidence, and (2) the humility created in me by being proven wrong in so many other areas. When I had some arguments with conditionalists friends on Facebook, and I found myself unable to defend eternal torment (because I handled the proof texts I frequently appealed to honestly), my thought was “Well, I was wrong on so many other issues. Maybe I got this wrong too.”

My reaction regarding the doctrine of Hell when I discovered what The Bible REALLY taught was this “How in the world could I have missed this? It’s so obvious!” Because in some cases, The Bible so clearly and unambiguously contradicted what I was taught that I was left baffled how I could have read The Bible cover to cover multiple times and missed it. Presuppositions are a powerful, powerful thing. Filters of tradition can make you blind to what’s staring you right in the face.

In this chapter, Bro Bird asks and answers the question “How could we have been so wrong for so long?” by recounting his own spiritual and intellectual journey. He goes over some of the texts that pricked his mind and caused him to doubt whether eternal torture was really biblical. He then brought up the common proof texts of eternal torment and gave brief and quick answers to them that he would go on in later chapters to unpack in much more detail. Mark 9;48, Revelation 14, Revelation 20:10, and Matthew 25:45-46. Bird shows how, when the Old Testament context of these verses is properly understood, they actually prove EXACTLY THE OPPOSITE of what the traditionalist is trying to prove!

For example, Mark 9:48 talks of being cast into Hell “Where their worm does not die and the fire is not quenched”. However, in this verse, Jesus is alluding to Isaiah 66:24. When you read Isaiah 66:24 (and the whole passage by the way), what you actually find is Isaiah talking about the day of The Lord, final punishment, in which the Lord would come and SLAY his enemies, and in verse 24, the DEAD BODIES of the wicked are being eaten up by worms and being consumed with fire. Isaiah does not have people being tormented by worms constantly eating them with fire that burns their flesh causing them agony. Isaiah say the wicked will be killed, and, having been killed, their corpses will be burned, eaten by maggots, and they will be an abhorrence to the righteous. Traditionalists rip Mark 9:48 out of its context and zombify Isaiah’s corpses, and paint a picture that the biblical authors would find utterly foreign!

This book is excellent, but it’s not without it’s flaws.

One criticism I have is that in chapter 15, Bird thinks Sheol is a “realm of the unconscious dead”. This is not at all how Ancient Near Eastern peoples would interpret Sheol. They very much believed Sheol was a conscious place. Bird has obviously studied the scriptures heavily, but it doesn’t look like he’s done much look into the cultural context of belief in the afterlife in the Ancient Near East or in Second Temple Judaism. That said, he is correct in pointing out that when The Bible speaks of Sheol, it isn’t envisioning the eternal torment realm traditionalists believe. And most reputable theologians and Bible scholars don’t make this argument anyway (i.e Sheol = ECT view of Hell). But I can imagine some uneducated preachers and laypeople making that connection.
I really liked this book, so I don’t want to belabor problems I found with it, so I will only mention three more. Some of the texts I found that he used to prove that annihilation is the fate of the condemned really had nothing to do with final punishment and most likely refer to physical death only (i.e the first death). For example, Genesis 3 and Romans 5 speak of death coming to all human beings because all sinned. But this most likely isn’t referring to the death of body and soul Matthew 10 speaks of, but simply physical death. I have never and still do not find Genesis 3 and Romans 5 to be incompatible with the traditional view of Hell. God kicked Adam and Eve out of the Garden, put a cherubim to guard the entrance, and therefore, they couldn’t get to the tree of life to eat from it and live forever (Genesis 3:22). But, that does not rule out their souls continuing on after death. Other passages had to do with death being the greatest penalty for the greatest crimes committed in theocratic Israel. But does this mean that God will annihilate the wicked? I don’t think that follows. I don’t think it’s sound to compare how theocratic Israel was to be governed with how God will judge the unredeemed at the eschaton.
It would also have been good if Bird had relied less on The King James Version and focused more on the original Greek. It’s the original languages where word studies matter most, and Bird seemed fixated on what he found in his English Bible.
.
Finally, parts of the book seemed to go on way too long. There would be lengthy bullet pointed sections of Bible verses supporting a plethora of points that Bird could have established by citing fewer texts. At certain points, I thought to myself “Is he just copy/pasting from the Open Bible website?” I like to refer to these as “text dumps”.

I think this is a pretty good book. I think there are better ones out there on this subject, such as Edward Fudge’s “The Fire That Consumes” and “Rethinking Hell: Readings In Evangelical Conditionalism”, mainly due to avoiding the issues I found with this one (e.g zeroing in on the Greek and not focusing on KJV English), to the person new to the final fate debate, this is a good introduction to the issue.

90% of my criticisms have to do with HOW the content was presented, not the content itself. I think Bird makes a compelling case for annihilationism.

Q&A: Starter Books On The Existence Of God