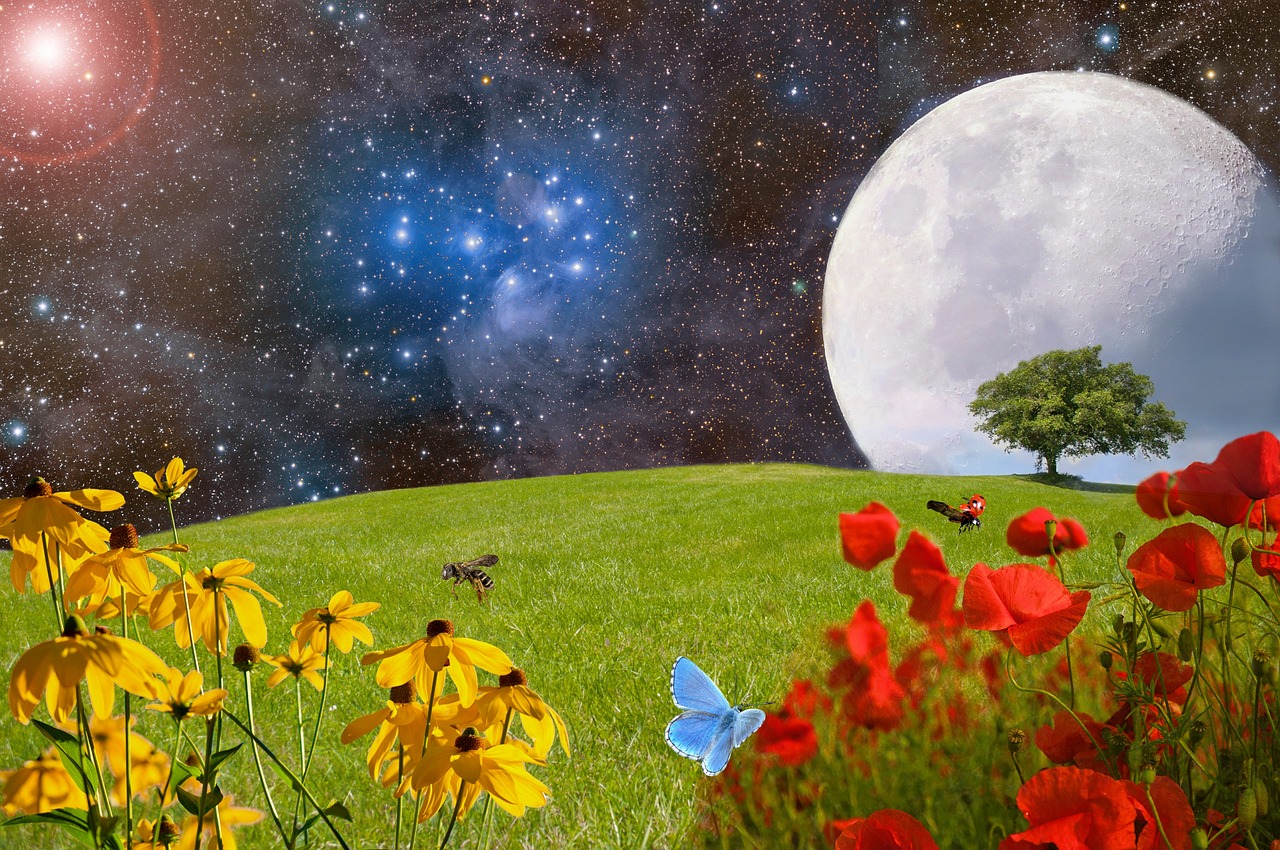 Introduction: Recently, I read a book called “Does Beauty Point To God?: Investigation By An Ex-Atheist Scientist” by John Kinson. The book argued for the existence of God using the existence of objective beauty in the universe. I was glad to get this book as The Argument From Beauty is one of the natural theology arguments I knew nothing about. It was good. I gave it 3 stars on Amazon.com and Good Reads. I took notes as I read so that I could quickly memorize this new information. In this blog post, I will transcribe all of my handwritten notes so that you can benefit from the overview of Kinson’s case as well. But please, do get this book for a more in-depth look. This blog post only summarizes his case. After all, the argument took up 400 pages, and my handwritten notes are only 9 pages long.

Kinson’s argument can be summed up in the following syllogism

Premise 1 is more probably true than false. If atheism were true, we would not expect objective beauty to be a feature of reality. At the very least, we would not expect objective beauty to be something we humans are universally able to perceive. This is because on atheistic evolution, we are merely the products of a Darwinian process. This process, sans God, would only produce in us abilities to do the following: flee, fight, feed, and reproduce. Anything that does not contribute to feeling, fighting, feeding, or reproducing would be a superfluous feature in the struggle for survival.

I think this would be the more controversial of the premises since the old adage “Beauty is in the eye of the beholder” has been thrown around quite a lot.

However, Kinson offers the following reasons to believe that (at least some) objective beauty exists.

1: If all beauty were subjective, then we would not expect there to be near-universal consensus on classical pieces of art such as Leonardo DaVinci’s “The Mona Lisa” or his statue of David. There would be no aesthetic difference between DaVinci’s paintings and scribblings by a 4-year-old. Yet, we all realize that DaVinci’s paintings are obviously better pieces of art than scribblings by a 4-year-old. If All beauty were subjective, then such universal recognition is nothing but sheer coincidence. This is absurd.

2: Beauty has a “Guiding Power” in science.

John Kinson then proceeded to demonstrate how science has had a history of selecting theories deemed by researchers to be more mathematically beautiful (“elegant” to use their terminology) over ones seemed less “elegant”. The more elegant ones eventually turned out to be true and the most supported and the less elegant ones turned out false and least supported. Scientists preferred the elegant theories over the non-elegant ones, and it just so happened that further research produced evidence that confirmed these theories.

Kinson quoted well-known scientists to show how beauty, and the recognition and preference for it, lead to true scientific conclusions.

3: To add a thought of my own, I remember various times being able to recognize beauty that I did not like, such as in certain musical genres like opera. Although I personally don’t care for opera singing, I can still tell when someone is singing well in these genres and when they are singing badly. In other words, I can recognize whether an opera singers singing is “beautiful” or “ugly” even though I wouldn’t care for that specific type of singing in either scenario. If musical beauty were subjective, why is it that I can recognize beauty even in areas that are not in accord with my own personal tastes? 2

4: In the chapter called “Beauty and Science”, John Kinson lists a plethora of quotes from scientists to show that the objective beauty of nature is recognized by many, many well-known scientists in a variety of different fields. Such scientists include Albert Einstein, Madame Curie, Stephen Weinberg, and Michael Faraday.

That such a long list of testimonies to the beauty of nature exists in the scientific community indicates that beauty is something that is actually there, objectively. At the end of the chapter, John Kinson says “Bottom line: We have seen numerous quotes above from a variety of scientists who confirm that science is permeated with beauty (and the universe is permeated with beauty), This near-universal recognition by scientists of the beauty in science (and of science) and of the beauty is similar to and consistent with the The Guiding Power Of Beauty In Science.”

Kinson went on to say: “The existence of this beauty in science and ‘The Guiding Power Of Beauty’ in science indicates that there exists an objective ‘quality of beauty’ in our physical universe, irrespective of the presence of any human observers.”

5: In the chapter, “Beauty and Mathematics”, Kinson lists a number of quotes from scientists who talk about the beauty and elegance in mathematics. The point made from the list of such quotes is that theories involving the most simple (i.e beautiful) mathematical equations eventually turned out to be the theories most well supported by the scientific evidence.

Kinson said that such a guiding power of beauty in mathematics is more consistent with (or more reasonably expected from) the hypothesis that the cosmos was created and designed by a powerful Creator who values mathematical aesthetics and wants His creatures to be able to recognize mathematical aesthetics as well. The ability to recognize beauty in mathematics is not needed by any species to survive, so why would random mutations and natural selection produce creatures like who can? Atheistic evolution cannot account for man’s ability to perceive mathematical beauty.

Given the truth of the 2 premises, the conclusion follows logically and inescapably. 3: Therefore, God exists.

Objection: Sexual Beauty Can Be Explained From A Purely Atheistic Perspective. Sexual Beauty Exists To Incite Animals To Engage In Sexual Intercourse.

Answer: Even if that were true, there are many non-sexual areas of beauty that don’t in any way contribute to homo sapien survival, such as the elegance in mathematics, the beauty of a starlit night, the beauty of the trees turning color in the autumn, the beauty of landscapes, and others. Why should a purely purposeless and random process give us the ability to recognize beauty in these areas? So, the existence and recognizability of sexual beauty would, at most, be the only kind of beauty explicable within an atheistic framework.

Moreover, as John Kinson points out in the chapter titled “Sexual Beauty”, the most beautiful human women are ironically the ones who have the fewest number of children while the less attractive women tend to have more children. This is not what atheistic evolution would predict.

Answer: While this is true in a few cases, like the patterns of a butterfly’s wing, in several cases, such beauty would actually reduce survivability. This is because bright ornamentation makes the creature more visible to predators. The tail of the peacock makes it more difficult for it to escape predators. It can even get its feathers caught in bushes in its attempt to get away. With the caveat that the feathers on a male peacock aids reproduction since peahens prefer that sort of thing, one should point out that atheism is impotent to explain why evolutionary processes gave the peahens the ability to prefer what rational and intelligent beings consider to be beautiful.

Moreover, this objection would, at most, explain the existence of these instances of beauty. It would not account for homo sapiens’ ability to recognize that such structures are beautiful.

The beauty of various flowers has been attempted to be explained by Darwinists by saying that insects are attracted to flowers because of their beauty and this leads them to pollinate. Pollination is good for the ecosystem and therefore, the beauty of flowers can be explained in a purely evolutionary framework. But is it reasonable to attribute the shared opinion of humans and bugs to evolution? For one thing, insects have tiny brains, so it is unlikely that they would have any sense of aesthetics at all. Secondly, even if insects needed to find flowers beautiful in order for pollination to take place, why is it that humans recognize the beauty of flowers as well? We humans don’t pollinate. Why did humans evolve the ability to recognize floral beauty when it does not contribute to our survival?

One could see how insects would need to see the beauty of flowers, but humans?

*These instances of beauty are (A) able to be recognized by us, (B) are able to be appreciated and enjoyed by us, (C) is objectively present, and (D) is pervasive throughout the universe.

Moreover, this beauty (E) has nothing to do with sexual reproduction, or (F) the survival of human beings.

*^John Kinson says that all of these are more consistent with the “God As Cosmic Artist” hypothesis than the atheistic random chance hypothesis. Thus, these examples provide beautiful (pardon the pun) examples of evidence for premises 1 and 2 of The Argument From Beauty.

I have enjoyed reading this book by John Kinson. These 9 pages of handwritten notes only capture an overview of his case for the existence of God. I do hope you’ll purchase the e-book on Amazon.com and read the full treatment for yourself. Psalm 19 tells us that the universe declares God’s glory. It declares His glory by showing us that God is not only an extremely intelligent engineer (as the cosmic fine-tuning and local fine-tuning arguments show us), but the universe also declares that God is a masterful artist as well. And both sets of “glory declaration” point to the existence of a powerful Creator. I hope that the next time you watch a sunset or look at a butterfly fluttering its wings on a flower in your front yard during the spring, that you’ll praise God for making His creation so pleasing to the senses.

1: I should point out that I think Kinson’s criticisms of Darwinian Evolution only apply to evolution when view through the atheistic worldview. I think Theistic Evolution avoids these criticisms. One could say, for example, that as unlikely as it would be for evolution to produce the ability to comprehend objective beauty, as long as it’s physically possible for evolution to produce this, one could say that God used his middle knowledge to actualize a feasible world where the evolutionary processes produced beauty perceiving faculties in homo sapiens, in spite of all the odds. A God-Ordained Evolutionary History would not be subject to Kinson’s objection.

2: I want to stress that I’m not saying musical taste is objective. It clearly isn’t. Rather, it’s that even when music doesn’t suit my personal tastes, I can still judge whether it’s good music or not. I’ve watched America’s Got Talent on NBC for years, and I can recall several instances thinking of some particular singer or other performers, “While that isn’t my thing, this person is very good at what he does and therefore should be given all Yes’s by the judges”.