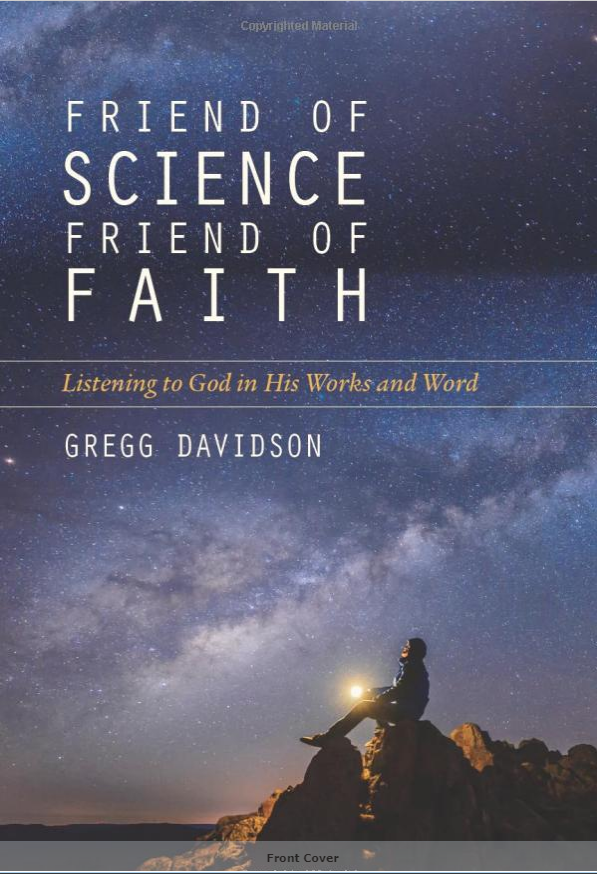 REVIEW OF “FRIEND OF SCIENCE, FRIEND OF FAITH” by Gregg Davidson.

Gregg Davidson is a Christian and Geologist who is a frequent contributor to BioLogos.org. In this book, he makes the case that modern science and Christianity are not in conflict. You do not have to choose between scientific facts about the origins of the world and life and the claims of the biblical texts. He begins the book by telling the heartbreaking story of a college student named Riley who was brought up in a Christian home, inundated with young earth apologetics, then went off to college to become a scientist. Becoming disillusioned by the overwhelming evidence that the earth is much older than a few thousand years, and the evidence that humans share biological relation with the great apes and evolved from a common ape ancestor, she literally threw the Bible she took with her to college in the trash bin! Her story is not unique, but Davidson opens the book with this story to show just how much is at stake. Peoples’ eternal destinies are at stake!

Davidson seeks to answer three questions in his book:

Very briefly, Davidson’s answers to these questions are:

1: The inerrancy of the Bible does not depend on the “literal” young-Earth interpretation being correct. The Bible is inerrant; the young-Earth interpretation is not.
2: God’s works in creation, understood through science, do not conflict with the explicit claims of God’s words in Scripture.
3: Old-Earth, evolutionary science makes credible claims about God’s creation, and most claims by young-Earth creationists are not consistent with what we observe in God’s creation.

Of course, Davidson has much more to say in answer to each of these three questions.

In the chapter titled “Nature and Biblical Inerrancy”, Davidson shows how the biblical texts’ descriptions of nature depict a dome-like cosmology which Israel shared with her neighbors. Followers of my blog on www.cerebralfaith.net will be well acquainted with this “Dome Cosmology” already. It’s all over The Bible, mentions of a solid firmament holding back waters, windows that open and shut to let down occasional rain, pillars that hold up the firmament, etc. Once you see it, you cannot unsee it. And looking at old artistic depictions and literary descriptions of the world from Ancient Near Eastern texts, you find that this conception of the cosmos was common in the Ancient Near East. Some of the details differed (for example, the pagans believed many gods managed the cosmos whereas Israel believed the only one did. Babylon believed Marduk made the solid sky out of half of Tiamat’s body and the land with the other half of her body.) but the general picture was the same. Does this threaten biblical inerrancy? Only if you hold to what Davidson calls “Comprehensive Inerrancy”. Davidson’s definition of inerrancy is in accord with my own as well the Chicago’s statement; that The Bible is inerrant in all that it intends to teach and affirms. Well, if you think The Bible intends to teach ANE cosmology, then it’s wrong in a lot of places. By contrast, if The Bible is communicating theological and moral messages while making use of cosmological imagery familiar to the author and audience, meaning the ANE science is just background and incidental, then The Bible is not in error. So how do we know whether The Bible intends to instruct on how the heavens go in addition to how to go to Heaven? Davidson gives several arguments from the text. Get the book to find out what those are!

Davidson goes on to give a persuasive case for what is commonly known as The Framework Hypothesis. I do think a literary framework is part of the author’s intent, but as I explain in various writings of my own on Genesis 1, I think Genesis 1 is mainly teaching what God decreed each thing’s function would be, and the 7-day structure is God setting up the cosmos as His cosmic temple. But as Walton notes in The Lost World Of Genesis One, this view and The Framework Hypothesis aren’t mutually exclusive. Ergo, I need not disagree with Davidson on this point, but simply say that there’s more to it than he went into.

Davidson’s treatment of the scientific evidence for an old earth and evolution are very accessible to the layman. One need not fear getting bogged down by technical jargon (or what I like to call “Scientist babble”). This book was written at the popular level. I think Davidson makes a compelling case for an evolutionary view of creationism.