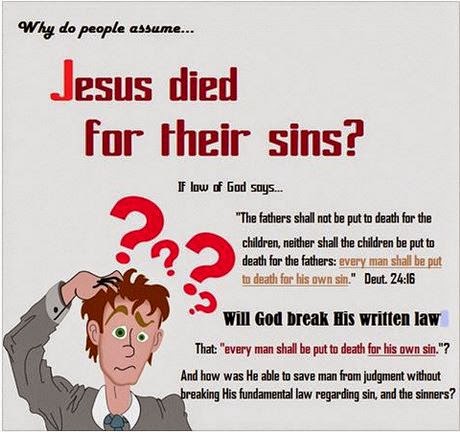 This blog post was inspired by a meme that someone posted in a group I’m in (the one shown above) regarding the doctrine of the atonement (i.e Jesus died for our sins).

God’s basic law regarding “sin” and the “sinners” is fair, just and righteous adapted and implemented as well in our society to punish anyone who committed and would commit sin(s). Now, will God who is the author of that law will break His own law, and send an innocent man as a payment for the sins of others?

What should we make of this? Did God break his own law? Is The Father being unjust for sending the Son to die for us? Here are some things to consider:

First, I need to clear up a common misconception: Jesus was not forced to die! Jesus said “No one takes my life from me. I lay it down of my own accord. I have the power to lay it down and the power to take it up again” (John 10:17-18). Jesus volunteered to die on the cross for our sins. Nobody forced Jesus to go to the cross to carry our sins. He chose to do it? Why? Because He loves us so much (John 3:16, Romans 5:8).

While it’s true that Jesus begged the Father to allow Him to not be crucified in the garden of Gethsemane (Matthew 26:36-56), this does not mean that Jesus was forced to die against His will. Rather, this is an instance of Jesus’ human nature expressing the natural fear of enduring horrific suffering. The Second person of the Trinity was asking the First if there was another way to save the human race that wouldn’t involve such extreme suffering. Jesus’ attitude though was essentially “Alright. If This is the only way to save them, I’ll do it. Spending eternity with them is worth the agony I’ll have to endure.” Jesus wanted us saved so badly that He was willing to endure the wrath of the Father so that we wouldn’t have to suffer the wrath of the Father after we die! He loved us that much! Jesus’ attitude makes sense. You wouldn’t endure what Jesus endured if there was another sufficient way of getting the job done right? It wasn’t that Jesus was unwilling to die, He just wanted to know if there was a less painful way to get the job done. When it became apparent to Him that there was not another way (or at least another way equally as sufficient), He submitted Himself to the wrath of the Father.

“In your relationships with one another, have the same mindset as Christ Jesus: Who, being in very nature God, did not consider equality with God something to be used to his own advantage; rather, he made himself nothing by taking the very nature of a servant, being made in human likeness. And being found in appearance as a man, he humbled himself by becoming obedient to death– even death on a cross!” – Philippians 2:5-8

For any concerns one may have on such cognitive limitations being evidences against Jesus’ divinity, check out William Lane Craig’s model of the Incarnation in the following links.

William Lane Craig on the Incarnation

There is a big difference between being “put to death” for the sins of others VS. “laying down one’s own life” for the same. What Deuteronomy is talking about is people being executed for others’ sins against their own will. The difference between what Deuteronomy 24 prohibits and what Jesus did on the cross is 1) Jesus voluntarily gave up His life (John 10:17-18) 2): Jesus was given as a sacrifice to cleanse the actual wrongdoers of their sins, to absolve them of their crimes.

The plea is to the idea that the Deuteronomy passage is upholding a principal of justice. That being that it is not right to make a person pay the debt that another individual owes. But that isn’t the case here. God in Christ died for others. If I sacrifice my life savings in order to cover the debt of someone else, no injustice is done. After all, do I not have the right to do with my money as I wish?

The Bible is true in saying that God doesn’t punish a man’s sins for another man’s sins. But we mustn’t forget that not only is Jesus MORE than a man (see Isaiah 9:6, John 1:1-14, Hebrews 1, Colossians 1, John 10:30), but also that Jesus gave up His life of His own accord (as noted above).

And I would also add that Jesus fits the definition “son” only in the sense of formation, not impregnation. Therefore, philosophically speaking is of son the same as biological son? I think not, in the strict sense of the word; we simply make emendations for such unions. Ultimately, Jesus is only “son” in practicality. The meme creator wants the “Father/Son” relationship of the triune God to be comparable to a human father and son relationship in order to make his point. But it isn’t!

Responding To An Anti-Christian Meme: Little Timmy and The Man Who Murdered His Family