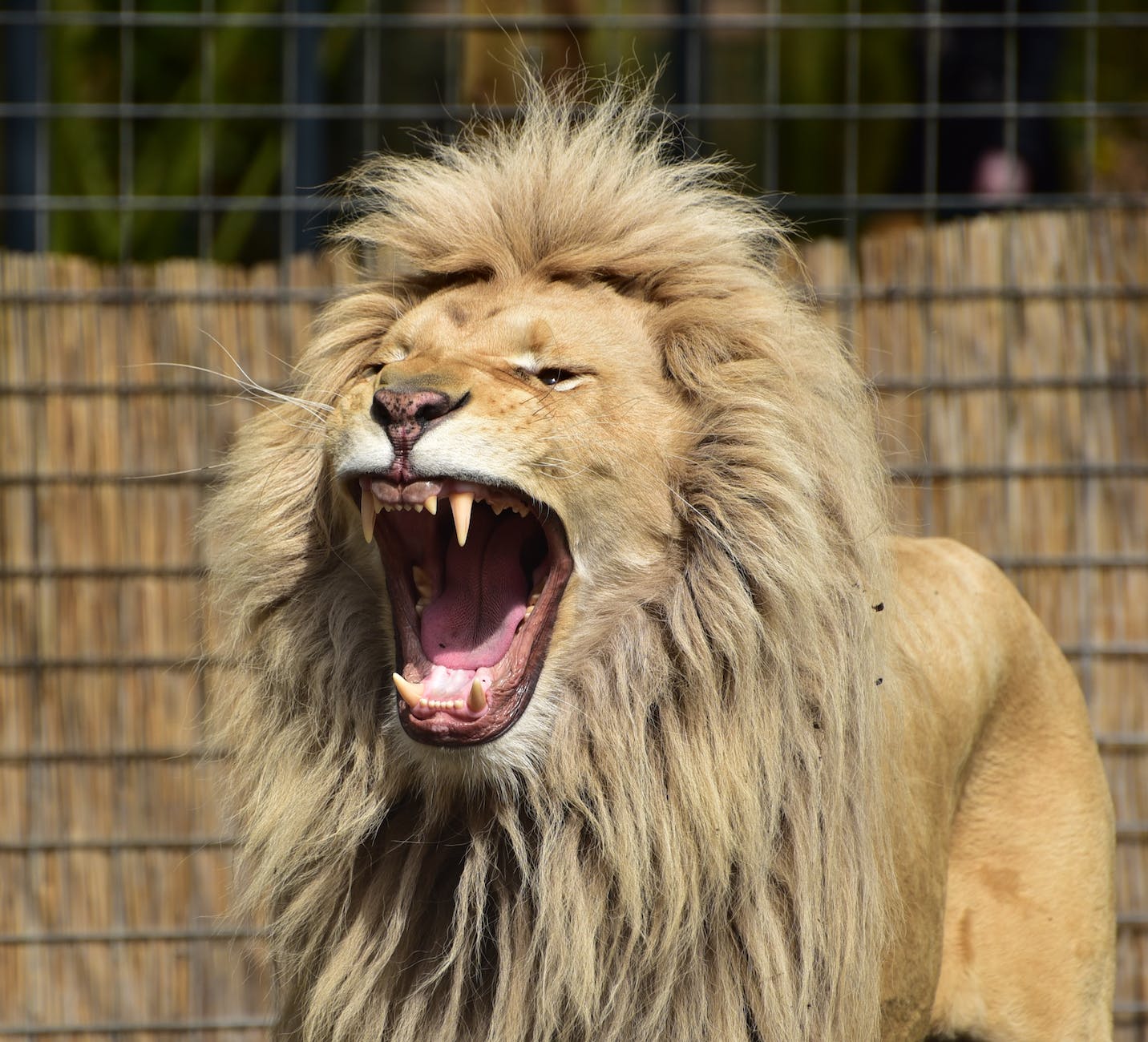 Photo by Pixabay on Pexels.com
SSometimes when someone witnesses to an unbeliever by appealing to arguments and evidence that point to the truth of Christianity, some believers will tell the Christian that The Bible does not need them to defend it. “The Truth does not need to be defended. It is like a lion. All you need to do is let it out of its cage” they will say. A Lion can defend itself. It is ferocious, it has sharp powerful jaws and razor sharp claws. Its roar strikes fear into its prey. Its roar carries authority. Why would you need to defend such an animal? You don’t. So these Christians will say that The Bible is the same way. This is supposed to be an argument that Christian Apologetics is a pointless exercise.

There are several problems with this argument.

*Regardless of whether scripture actually needs defending, scripture commands us to defend it nevertheless.

The Bible commands us to do apologetics. 1 Peter 3:15 says “But in your hearts set apart Christ as Lord. Always be ready to give a defense to anyone who asks for the reason for the hope that you have, yet do this with gentleness and respect”. This verse of The Bible is clear and unequivocal. Always be prepared to defend your faith whenever anyone asks you to give the reasons for why you have placed your hope in Jesus Christ. So even if we concede the premise that the Christian faith doesn’t need to be defended, we are still commanded to defend it. Ignoring this command would therefore be sinful.

The Apostle Paul said in his second letter to the church in Corinth “We demolish arguments and every pretension that sets itself up against the knowledge of God, and we take captive every thought to make it obedient to Christ” (2 Corinthians 10:5). This is what apologetics is all about. We need to “demolish arguments” like the problem of evil & suffering, the hiddenness of God, supposed contradictions people think they have found in scripture, or simply the claim “There is no evidence for God’s existence”. These are arguments that set “itself up against the knowledge of God” that we need to “demolish”. If we do, then we might be able to “take every thought captive and make it obedient to Christ”.

In Philippians 1:7 Paul speaks of his mission as “defending and confirming the gospel.” Then he says in Philippians 1:16, “I am put here for the defense of the gospel.” This implies that God placed Paul on this planet to be a defender of the Christian faith, which he was. When you read Acts 17, you see that when Paul and his companions had passed through Amphipolis and Apollonia, they came to Thessalonica, where there was a Jewish synagogue (Acts 17:1) and then it says that as was his custom, he “reasoned with them from the Scriptures …” (verse 2), “explaining and proving that the Messiah had to suffer and rise from the dead.” (verse 3) and then after he explained and proved to the Jews that the messiah had to suffer and rise, “Some of the Jews were persuaded and joined Paul and Silas, as did a large number of God-fearing Greeks and quite a few prominent women.” This is important, because often you will hear some Christians say that no one comes to faith through arguments. But we have an example of some of the people coming to faith after hearing Paul’s arguments. Acts 17:4 refutes that notion.

Then several verses later, Paul was in Athens witnessing to the Athenians. And Acts 17:17 says “he reasoned in the synagogue with both Jews and God-fearing Greeks, as well as in the marketplace day by day with those who happened to be there.” Other translations say he “disputed” with them, or he “debated” them. Now, he was able to reason from the scriptures with the Jews, but he couldn’t do that with the Athenians. Why? Because the Athenians didn’t accept the Jewish scriptures as divinely inspired. So he appealed to natural revelation instead (see Acts 17:22-31).

Jude 3 says, “Dear friends, although I was very eager to write to you about the salvation we share, I felt I had to write and urge you to contend for the faith that was once for all entrusted to the saints.” The people Jude addressed had been assaulted by false teachers, and he needed to encourage them to protect (literally agonize for) the faith as it had been revealed through Christ. Jude makes a significant statement about our attitude in verse 22, that we “have mercy on some, who are doubting”.

So, does The Bible need defending? I think the answer to the question is irrelevant. It doesn’t matter whether God, or The Bible, or Christianity needs defending. The Bible commands us to defend it.

* Rational People Naturally Desire Reasons Before They Believe Something.

God created humans to reason as part of his image (Genesis 1:26-27, Genesis 9:6). It is by reasoning that humans are distinguished from “brute beasts” (Jude 10). God calls upon his people to use reason (see Isaiah 1:18) to discern truth from error (1 John 4:6) and right from wrong (Hebrews 5:14). The primary standard of rationality is that it should cough up epistemological warrant for belief.

“People rightly refuse to believe without evidence. Since God created humans as rational beings, he expects them to live rationally, to look before they leap. This does not mean there is no room for faith. But God wants us to take a step of faith in the light of evidence, rather than to leap in the dark. Evidence of truth should precede faith. No rational person steps in an elevator without some reason to believe it will hold him up. No reasonable person gets on an airplane that is missing part of one wing and smells of smoke in the cabin. People deal in two dimensions of belief: belief that and belief in. Belief that gives the evidence and rational basis for confidence needed to establish belief in. Once belief that is established, one can place faith in it. Thus, the rational person wants evidence that God exists before he places his faith in God. Rational unbelievers want evidence that Jesus is the Son of God before they place their trust in him.” – Norman Geisler (emphasis in original)

So, I don’t think it’s sufficient to just give an unbeliever a Bible and walk away and “let the truth defend itself”. For one reason, there are many holy books out there claiming to be “the truth”. The rational unbeliever is going to want you to give some reasons for him to think that The Bible should be believed instead of, say, The Koran, or the Hindu scriptures, or the Buddhist scriptures. He may ask you why you disbelieve in all of the other gods of all of the other religions but not the God of The Bible. That’s not too much to ask. And fortunately, we Christians can meet that challenge if we do our homework. If you simply quote The Bible, you’ll rightly be accused of circular reasoning.

*You Can Make The Same Argument About Preaching The Gospel

If The Bible can defend itself, why can’t it preach itself? Why can’t we just leave it up to the non-Christian to go to their local book store or library, purchase a Bible, read it, and just hope for the best? Why can’t we do that? Well, because, like defending the gospel, scripture calls us to “Make disciples of all nations” (Matthew 28:19). We’re called to preach the gospel to a dark and dying world. We’re called to spread the good news. Does God need us to preach the gospel for Him? No. Probably not. But we’re called to do it anyway. And we’re called to do Christian Apologetics also (see 1 Peter 3:15).

The Bible, God, Christianity may not need defending. But that’s irrelevant because God commands us to “Always be ready to give a defense to anyone who asks for a reason for the hope that you have,” (1 Peter 3:15). We are called to defend our faith against the attacks of unbelievers. When someone asks us why we believe what we believe, scripture commands us to give them reasons. Moreover, people need evidence to determine whether The Bible even is the word of God. How do we know the Bible is God’s revelation to us, as opposed to the Qur’an or the Book of Mormon? One must appeal to evidence to determine this. No Christian would accept a Muslim’s statement that, “the Qur’an is alive and powerful and sharper than a two-edged sword.” We would demand evidence that the Qu’ran is God’s Word. As Norman Geisler put it in his article “Why We Need Apologetics”; the analogy of a lion is misleading. The only reason a lion’s roar has authority is because we have good evidence of what a lion can do. But if you were just born yesterday or came from another planet, would you be fearful of this big lion? Probably not. You might try to go pet it and have your alien arm ripped off.

In addition to all of this, you could make a parallel argument about evangelism in general. Why did Billy Graham hold all of those crusades? Why did he travel all around the world preaching to people? Why didn’t he just leave it up to the non-believer to go to their local book stores, buy a Bible, read it, and hope for the best? If The Bible can defend itself, why can’t the gospel preach itself?

I’ll end this blog post with a quote from John Calvin. As a Molinist, I feel weird quoting him to make my point but he’s dead on accurate here. He said “Even a dog barks when its master is attacked. I would be a coward if I saw that God’s truth is attacked and yet would remain silent”.

Like Calvin, I cannot help but bark when I see skeptics attack Christianity.

If You Can’t Argue Someone Into Faith, Why Debate?

The Importance Of Distinguishing A View From Its Entailments