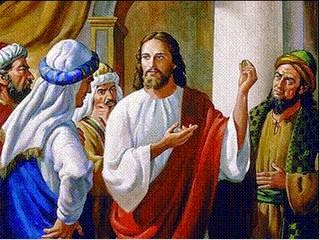 If you’ve been following this blog for a good while now, you’re probably aware that The Bible does not endorse blind faith (and in some cases actually discourages it), and also that it exhorts the believer to engage in the practice of Christian Apologetics; the intellectual defense of the Christian Faith using science, history, philosophy and theology. 1 Peter 3:15 exhorts us to “Always be ready to give a defense to anyone who asks us to give a reason for the hope that we have but do so with gentleness and respect.” But did you know that Jesus Christ Himself engaged in the practice of apologetics? Yes! He did! Jesus often times engaged in rational argumentation. When his opponents brought up accustations and ploys to trap him, He refuted them using logic.

This is quite telling because many Christians are opposed to the act of defending the truth claims of their faith with rational argumentation for one reason or another. But if Jesus engaged in defending Christianity (the legitimacy of his own ministry and radical claims) using logic, reason and evidence, Christians should do the same since the word of God exhorts us to follow in His footsteps (see Philippians 2:5-8). Our attitude should be that of Christ Jesus. Below, I’ll list just a few instances of Jesus engaging in logic and argumentation.

1: Refuting Accusations That His Power Came From Demons.

The Pharisees hated Jesus. He abused their pride on more than one occasion but if that wasn’t enough, He made radical claims to deity both explicitly and implicitly through his words and deeds which prompted them to accuse Him of blasphemy on different occasions (e.g John 10). Despite the fact that Jesus was backing up His claims by fulfilling numerous prophesies and performing miracles, the religious leaders simply would not believe in Him.

The Pharisees saw all of the supernatural acts that Jesus had done. They saw the messianic prophesies that Jesus had fulfilled. They had overwhelming evidence that Jesus was the messiah, and yet they suppressed the truth in their unrighteousness (Romans 1:18) so greatly, that they declared that Jesus’ power came from the devil! Now, they could not possibly deny the nature of Jesus’ deeds, they were clearly supernatural. So they knew that supernatural acts could only come from 2 sources: either they came from God, or the devil. Well, if they admitted that His deeds were from God then they had to accept His claims to deity and His claims to be the messiah, which they did not want to do. So instead they accused Him of being in cahoots with Satan! After this, Jesus gave them a very logical refutation to their accusation. Jesus said that it would be absurd for Him to be casting out demons by the power of another demon because that would mean that Satan would be fighting against his own army. It would be like a general in an army telling one of his soldiers to go start shooting other soldiers who were in the same army as he was. He said it was illogical for Satan to cast out Satan. Therefore, the logical conclusion must be that Jesus casts out demons by the finger of God (i.e The Holy Spirit). (see Matthew 12:22-37, c.f Mark 3:20-30, Luke 11:14-28)

Jesus engaged in a type of argumentation known as reductio ad absurdum which is Latin for Reduction To Absurdity. Jesus sought to reduce the accusation of the Pharisees to absurdity by taking their statement and pointing out the absurd results if their statement was affirmed as true. Jesus also used a tactic that has been termed by Frank Turek as “The Road Runner Tactic” and by Greg Koukl as “The Suicide Tactic”. This tactic takes a claim or argument and turns it on itself. It’s a tactic that takes a claim or argument and shows it to be self refuting in nature. The religious leader’s argument was self refuting because if their statement was true then what about the own exorcists among them? Are they casting out demons by the power of other demons too? Jesus said “And if I drive out demons by Beelzebul, by whom do your people drive them out? So then, they will be your judges.”  (Matthew 12:27). In other words, either their own exorcists were also in cahoots with the devil or they were getting their power to cast out devils by another source (i.e God). If they affirmed the latter for their own exorcists, their accusation would no longer hold any water. Their premise would be shown false. If they affirmed the former, their own exorcists would condemn them for what they said (Matthew 12:27). Jesus employed reductio ad absurdum and had shown their claim to be self defeating. Not self-defeating in the logical sense like the claim “there is no truth” or “My parents had no kids that lived” but self-defeating in the sense that by continuing to affirm it, they’d undermine the practice of an entire group among their ranks (i.e exorcists).

2: Answering A Troubling Question About The Resurrection.

In a similar way that there’s a divide among modern day Christians about the age of the earth, there was a divide 2,000 years ago among adherents to Judaism about the doctrine of the resurrection. There were some Jews who believed that once you died, that was it. Lights out! No afterlife whatsoever. Those were called the Sadducees. They agreed with atheists that death was the end of existence, so they were sad…you see? The other group that believed in resurrection were known as the Pharisees. The Apostle Paul belonged to this group back when he went by the name “Saul”.

A Sadducee approached Jesus and tried his own reductio ad absurdum argument. He mentioned a woman who gets married over and over again having husbands die on her each time before she herself dies. This Sadducee asks Jesus whose wife she’ll be at the resurrection. Jesus points out that the presupposition behind his argument-disguised-as-a-question is incorrect. At the resurrection there won’t be any marriage. No one will marry nor be given into marriage. We’ll be like the angels in Heaven in that sense. There won’t be any more marital relationships or sexual relationships. Therefore, there won’t be any issue on who gets to be the husband of this hypothetical woman. (see Matthew 22:22-33).

Although Jesus doesn’t mention it, I submit to you that all of our Earthly relationships with be done away with. There won’t be any husband/wife, father/son, father/daughter, mother/son, mother/daughter, aunt/nephew, aunt/niece, uncle/nephew, uncle/niece, or grandparents/grandchildren relationships once we go to Heaven (both the intermediate state and post-resurrection). We will all be on one relational place. We will all be spiritual brothers and sisters under 1 Heavenly Father (God). The brother/sister in the Christian sense will be the relationship we will all have towards one another.

Challenging false presuppositions is important in doing good apologetics. A modern day paralelle would be challenging atheists’ assumptions that good science only includes naturalistic hypotheses (hard methodological naturalism) preventing any potential evidence for a scientific creation model from even being considered. Hard methodological naturalism rules out God a-priori. The evidence can’t even get a fair hearing under such conditions.

Jesus not only used logic to refute his opponents, he also placed a high value on evidence. Unlike many churches across America today, Jesus never expected people to believe in Him in the absence of any good reasons to believe. In fact, Jesus actually told us not to believe anything that came out of his mouth about God unless He provided good evidence to back up His claims. He said “If I do not do the works of My Father, do not believe Me; but if I do, though you do not believe Me, believe the works, that you may know and believe that the Father is in Me, and I in Him” (John 10:37-38, emp. added).

If The Bible was really pro-blind faith, we would expect Jesus to have said something like “Even if I don’t do the works of my Father, believe in me anyway. If I did good works to let you know that The Father is in me and I in Him, there’d be no room for faith.” But instead, Jesus admonished us not to give credence to anything He said unless He “did the works of (his) father”.

Later, Jesus noted that when people refused to believe in Him as the Son of God, they were without excuse, since the evidence of His divine identity had been amply demonstrated: “If I had not done among them the works which no one else did, they would have no sin; but now they have seen and also hated both Me and My Father” (John 15:24, emp. added). So their lack of faith could not be attributed to their inability to know the truth regarding the person of Jesus (cf. John 8:32).

Tags: Christian Witnessing, What Faith Is

Why I Favor The Minimal Facts Approach Over The Maximalist One