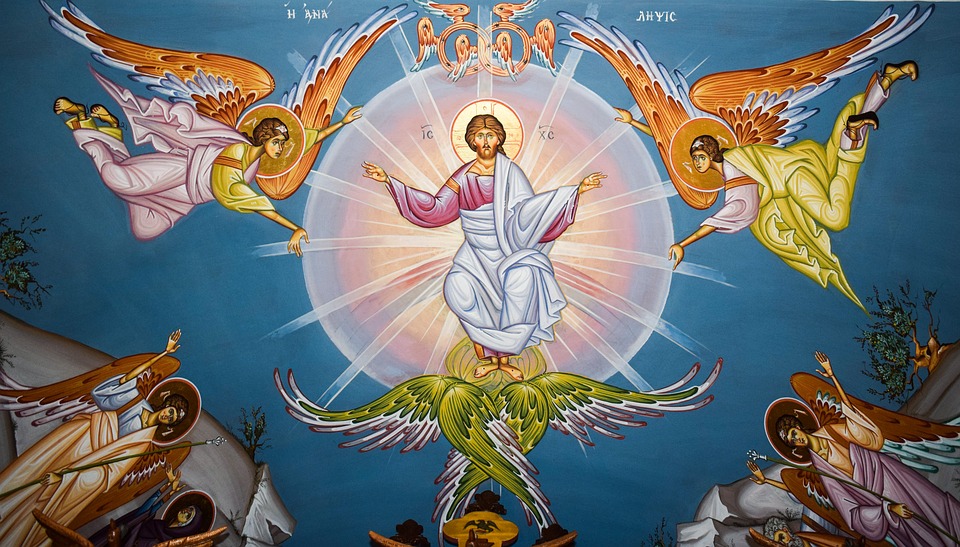 I told some friends about this and I have a few questions:

1) If Jesus was a human after his resurrection, how is it that he could ascend into heaven and into outer space?

3) What would you do if Molinism were shown to be false? Would you consider Calvinism?

1: If Jesus was a human after his resurrection, how is it that he could ascend into heaven and into outer space?
In answer to number 1, I don’t think Jesus actually did ascend into outer space, but to Heaven. Likely a portal opened up and he passed through it. I don’t think the doctrine of the ascension requires us to believe that Jesus zoomed past Saturn and Neptune, and past the Andromeda galaxy before arriving at His throne in Heaven. Although He certainly could have and not died from oxygen starvation. After all, this is Jesus we’re talking about. He certainly could have performed a miracle to keep himself from suffocating to death. Though given the nature of his resurrection body, such a miracle might not be necessary. After all, The Bible says that the resurrection body is indestructible.
“Listen, I tell you a mystery: We will not all sleep, but we will all be changed—in a flash, in the twinkling of an eye, at the last trumpet. For the trumpet will sound, the dead will be raised imperishable, and we will be changed. For the perishable must clothe itself with the imperishable, and the mortal with immortality. When the perishable has been clothed with the imperishable, and the mortal with immortality, then the saying that is written will come true: ‘Death has been swallowed up in victory.’” – 1 Corinthians 15:51-54 (NIV)
The Bible also says that our bodies, will be like Jesus’ resurrection body was. The Bible says “The Lord Jesus Christ…will transform our lowly bodies so that they will be like his glorious body.” (Philippians 3:20-21). If our resurrection bodies will be “imperishable”, and Jesus’ resurrection body is the same as ours will be, then it follows that Jesus’ resurrection body was also imperishable. Therefore, even if Jesus did zoom into outer space when He ascended, I don’t think He’d die from lack of oxygen.
2) What would be a defeater of the Christian faith? What would falsify Christianity?

In answer to number 2; If one could show beyond a reasonable doubt that either God did not exist or Jesus did not rise from the dead, then Christianity would be falsified. Atheists have tried to do this by appealing to the problem of suffering, the hiddenness of God, Darwinian Evolution, coming up with an alternative explanation to account for Jesus’ empty tomb and post mortem appearances, but none of these explanations succeed in explaining the data like the resurrection hypothesis, to see my treatment of these atheistic arguments, check out the blog posts “The Problem Of Evil &Suffering (Revisited)”, “Why Does God Hide Himself?” and “Why I’m Skeptical Of Darwinian Evolution”. If you take the time to read those blog posts, you’ll see that those attempts on the part of unbelievers to falsify Christianity do not succeed. But if one could conceivably prove that either God does not exist or that the resurrection of Jesus did not occur, we’d have to find a new worldview.

As Paul said in 1 Corinthians 15:17-19 “And if Christ has not been raised, your faith is futile; you are still in your sins. Then those also who have fallen asleep in Christ are lost. If only for this life we have hope in Christ, we are of all people most to be pitied.“ However, Paul assures us in verse 20 that “…Christ has indeed been raised from the dead, the firstfruits of those who have fallen asleep” And we fortunately have an abundance of historical evidence that shows that he was right. By using the historical principles of authenticity (such as the principle of multiple attestation, the principle of embarrassment, the principle of enemy attestation, and so on), we can examine the New Testament documents as well as secular documents and prove beyond a reasonable doubt that (1) Jesus died by crucifixion, (2) Jesus’ tomb was found empty that first Easter morning. (3) The disciples of Jesus believed they saw Him alive after His death, (4) Saul of Tarsus, formerly an enemy of Christianity, converted on the basis of what he perceived to be a post-mortem appearance of the risen Jesus, and (5) that James, Jesus’ brother and a skeptic of Christ became a Christian after experiencing a post-mortem sighting of Jesus. I go into arguing for the historicity of these 5 facts in the blog post “The Minimal Facts Case For Jesus’ Resurrection PART 1”

The historical “criteria of authenticity” applied to both New Testament and secular texts, establish these 5 facts. Non-Christian historians have tried in vein to come up with an alternative explanation to adequately account for this data in a non-supernatural framework, but as I show in “The Minimal Facts Case For Jesus’ Resurrection PART 2” none of these explanations succeed. Only the resurrection hypothesis (or “He is risen!”) can best explain those 5 facts.
3) What would you do if Molinism were shown to be false? Would you consider Calvinism?

In answer to 3, no I wouldn’t consider Calvinism. I’d probably revert to being a simple foreknowledge Arminian. The middle 3 points of the T.U.L.I.P are contradicted overwhelmingly by scripture, and the implications of determinism entail a logically impossible truth (i.e God is the author of sin, therefore responsible for sin, therefore a sinner). But I’m not worried about it ever being proven wrong. It has the best explanatory scope of all of the biblical data on soteriology and divine providence of all the views I know of. Arminianism and Calvinism can account for some of the data, but not all of them.

There are biblical passages that make sense on Arminianism, but not on Calvinism. There are biblical passages that make sense on Calvinism, but not on Arminianism. All passages regarding soteriological issues make sense from a Molinist perspective.
For example, The Bible teaches that God “is not willing that any should perish but that all should come to repentance” (2 Peter 3:9), that God “wants all people to be saved and to come to a knowledge of the truth” (1 Timothy 2:4), which is why He sent His Son to die for “The world” (John 3:16), “The whole world” (1 John 2:2), for “everyone” (Hebrews 2:6). Jesus “gave Himself as a ransom for all people” (1 Timothy 2:6). The Bible also indicates that God’s Holy Spirit can be resisted (see Acts 7:51), and that humans have a choice between serving and worshipping God, or living in sin and serving false Gods (see Deuteronomy 30:15, Joshua 24:15, Ezekiel 18), and that forfeiting salvation is possible (Hebrews 6:4-6, 1 Peter 5:8, 2 Peter 2:15-18, 2 Peter 2:20-22).
On the other hand, it also teaches that God predestines individuals to salvation (Romans 8:29-30, Ephesians 1:4-5, Acts 13:48), and that true believers will never ever lose their salvation (John 10:28-29, Romans 8:38-39, Philippians 1:6, Ephesians 1:13, 1 John 2:19).
But if God wants everyone saved and if Jesus died for everyone, then why are only some predestined to salvation? Moreover, if we are predestined, then how is it that we can choose whether or not to receive Christ? And if it’s possible to lose our salvation, why does The Bible insist that we won’t? This is where Molinism comes to ease the tension between these two sets of scriptures. Unlike on the Calvinist view, God doesn’t predestine people by making a seemingly arbitrary list of who He wants to save and who He wants to damn, and then zaps those people with irresistible grace to compel them to salvation. On Molinism, God predestines people by means of his middle knowledge. For example, God knew “If Susan is in circumstance T, she would choose action Y over action Z” in this case, you could let action Y be “choosing to accept Christ as her savior” and circumstance T could be some point in her life where she comes to a place of emotional and spiritual brokenness (which would be the result of several prior events). If God chooses to actualize a world where Suzan endures circumstances culminating in T, which results in Susan choosing Christ, then it can be said that God predestined Susan, since he chose “before the foundations of the world” to actualize the possible world where one of the statements in the conjunct is “Susan is in circumstance T”.
Well, that solves the tension between our freely choosing Christ and God’s grace being resistible with the doctrine that God predestines people. But that still doesn’t reconcile the doctrine of predestination with the biblical teaching that God wants everyone saved and died to pay for the sins of all people. If God wants everyone saved, and He can bring their repentance about freely by means of His middle knowledge, then why doesn’t He predestine everyone to Heaven in this way? There is no one Molinist answer to this question, but all Arminian-Molinists argue that the reason God doesn’t predestine everyone in this way is because for some reason or other, a possible world where universal salvation comes about is an infeasible world for God to actualize. This could be either because anyone who is damned in the actual world would be damned in any possible world that God creates. So God decides to actualize a world where those who would be saved in some possible world, actually are saved in the actual world. I reject this explanation on the basis of Matthew 11:21-23 which I quoted above.
Another option is congruism which teaches that everyone would be saved in some possible world, that there is a just right salvation-prompting-circumstance for everyone. What I mean by that is that there is some circumstance which would prompt a positive response out of everyone, if only God created the person in that circumstance. However, the reason why God doesn’t do this is because it’s likely that all of the salvation-prompting-circumstances cannot be cobbled together in a single world. For example, some or even many of these salvation prompting circumstances may very well cancel each other out! What if a feasible world where Bob chooses Christ is a world where Sam rejects Christ? What if a world where Bob rejects Christ is a world where Sam accepts Christ? If God were to actualize feasible world #1, Bob is saved but Sam is lost. If God were to actualize world #2, Sam is saved but Bob is lost. God cannot bring about the free repentance of both without overriding the freedom of at least one. I go into a lot more detail on this in “A Simple Explanation Of Why Some Possible Worlds Are Infeasible” and in “Molinism: Why Isn’t Everyone Saved?”
I agree wholeheartedly with William Lane Craig’s assessment of Molinism: “Molinism is one of the most fruitful theological ideas ever conceived. For it would serve to explain not only God’s knowledge of the future, but divine providence and predestination as well.”

A Look At Kirk MacGregor’s Argument For Middle Knowledge