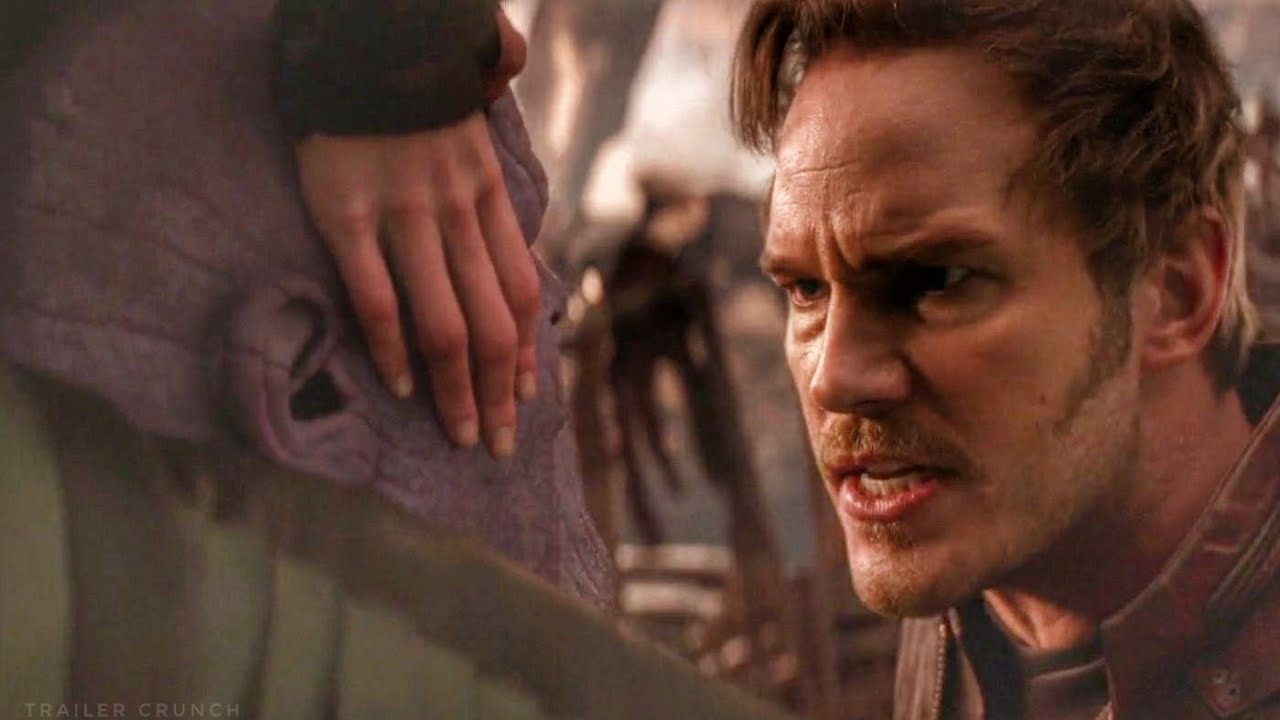 In Avengers: Infinity War, The Avengers were going to try to defeat Thanos by pulling the Infinity Gauntlet off of him since that made him so powerful that even multiple heroes couldn’t stop him. Thanos had revealed, however, that he had killed Gomorrah (Peter Quill’s alien girlfriend) in order to retrieve the Soul Stone. This is because the only way to get the Soul Stone was to sacrifice someone you loved, and Thanos did care for his adopted daughter.

Star Lord/Peter Quill went into a rage and repeatedly bludgened him in the head while Iron Man, Spider-Man, Drax, Doctor Strange, and Mantis tried to get the Gauntlett off of him. They had subdued him via Doctor Strange’s magic, Spider-Man’s webbing, and Mantis’ psychic ability to get people to fall into trances. But even all that barely contained him.

There is a debate among Marvel fans whether or not it was Star Lord’s fault that they lost. The events of Endgame didn’t need to come to pass if Star Lord/Peter Quill had just kept his cool.

My conclusion on the issue is this: People who say it was Star Lord’s fault that The Avengers lost in Infinity War are correct. People who say that there was only one possible future that Doctor Strange saw in which they won, and that that future didn’t involve getting the gauntlet off of Thanos before he got all 6 stones are also correct.

If Star Lord hadn’t punched Thanos repeatedly while he was under Mantis’ trance, there would have been a future that didn’t involve the snappening. But because that’s not what Star Lord would freely choose to do in the circumstance in which Gomorrah’s demise was revealed, that future was not feasible for Doctor Strange to actualize.

This is the difference between a possible world and a feasible world. Some worlds may be logically possible (and there many possible ways they could have defeated Thanos as many online comics and parodies have shown), but due to the free choices of the individuals that Doctor Strange foresaw via The Time Stone, none of those circumstances were feasible for Strange to actualize.

Likewise, there may be many possible worlds in which no one ends up in Hell, and no one freely chooses evil, but due to the free choices of human creatures, such a world may not be feasible for God to actualize. Thus the premise of the logical version of the problem of evil that says that God, being all-powerful, can create any kind of world that He wants is not necessarily true. God may not be able to actualize a world in which all people freely love Him and each other, and treat one another with kindness. Instead, God has chosen the best feasible world; one where all of His intended goals come to pass and where suffering, when it occurs, brings about some greater good at some point in someone’s life or lives (Genesis 50:20, Romans 8:28). And in the end, evil will be ultimately conquered (Revelation 21-22), as Thanos’ evil was ultimately conquered in Avengers: Endgame, even though many people suffered for 5 years in between the endings of these two movies. This is at minimum, possible, and since it’s possible, then this means that there is no logical contradiction between the statements “God exists” and “suffering exists”. Because for these two statements to logically contradict, it cannot even be POSSIBLE that they can be reconciled. You have to show that isn’t even logically possible for God to have morally sufficient reasons for creating humans with free will, and for allowing any given instance of evil and suffering.

This is why most atheist philosophers today don’t use the logical version of The Problem Of Evil anymore. They instead opt for the evidential version. Proponents of the evidential version propose that it’s possible that God and suffering could co-exist, but argue that it is unlikely that they do. Now, I’ve written an entire chapter covering both versions of The Problem Of Evil in Chapter 7 of my book “The Case For The One True God” and I’ve also covered both versions in many blog posts here on CerebralFaith.net, and I show why even this more modest version of the argument from evil fails.

But in short, my points against the evidential version are:

1: We’re not in a position to make probability judgments given that every event sends ripples into the future.

We have no idea whether some suffering X in the present, won’t ripple into the future to bring about greater good Y, or even a plethora of greater goods that manifest themselves in different time periods in different peoples lives for decades. Only an all knowing God can determine whether allowing X is justified or not. Aside from more astute viewers like Tim Stratton, (see his blog posts “Avengers: Infinity War & Possible Worlds” and “Avengers: Endgame, Middle Knowledge, and The Destruction Of The Problem Of Evil”) no one could have imagined prior to the ending of Avengers: Endgame that Doctor Strange willingly handing over the Stone was actually justified! It was a key event in bringing about the future in which The Avengers beat Thanos once and for all! But to all appearances, it looked like Strange had made a mistake.

– Narratives in which God worked through suffering to bring about good (e.g story of Joseph in Genesis 38-50)

– The purpose of life is not happiness but knowledge of God. God can and has used suffering to draw people to Himself.

This was initially going to just be a Facebook status, but it got so lengthy that I thought to myself “Ah heck, it might as well be a blog post at this point.” And ergo, that is why you find it here.

So in conclusion, both sides in this comic book movie debate are right. It is Star Lord’s fault that The Avengers lost round one, but it’s also correct that there was really only one future in which Thanos’ evil plan would ultimately fail. The reason why both sides can’t see that they’re correct is, in my opinion, that they fail to grasp the difference between a possible world and a feasible world. Many worlds may be possible, but not all of them are feasible due to the free choices of creatures in the circumstances in which they could or would find themselves.

Similarly, we are responsible for making this world a horrible place to live. It’s our fault if it’s the case that God couldn’t give us free will without us abusing it. At the same time, God has taken “the cards that he’s been dealt” and played them so wisely that His ultimate goals for humanity are never thwarted; and the biggest goal is redeeming as many as will come (Revelation 22:27 cf. Acts 17:30, Matthew 23:37) so He can have a huge human and divine family in a state of sinlessness and perfection for all eternity (Revelation 21-22).

“The Case For The One True God: A Scientific, Philosophical, and Historical Case For The God Of Christianity” by Evan Minton

“My Redeemer Lives: Evidence For The Resurrection Of Jesus” by Evan Minton

“Avengers: Endgame, Middle Knowledge, and The Destruction Of The Problem Of Evil”) by Tim Stratton

Q&A: Follow Up On Objections To The Free Will Defense Against The Problem Of Evil