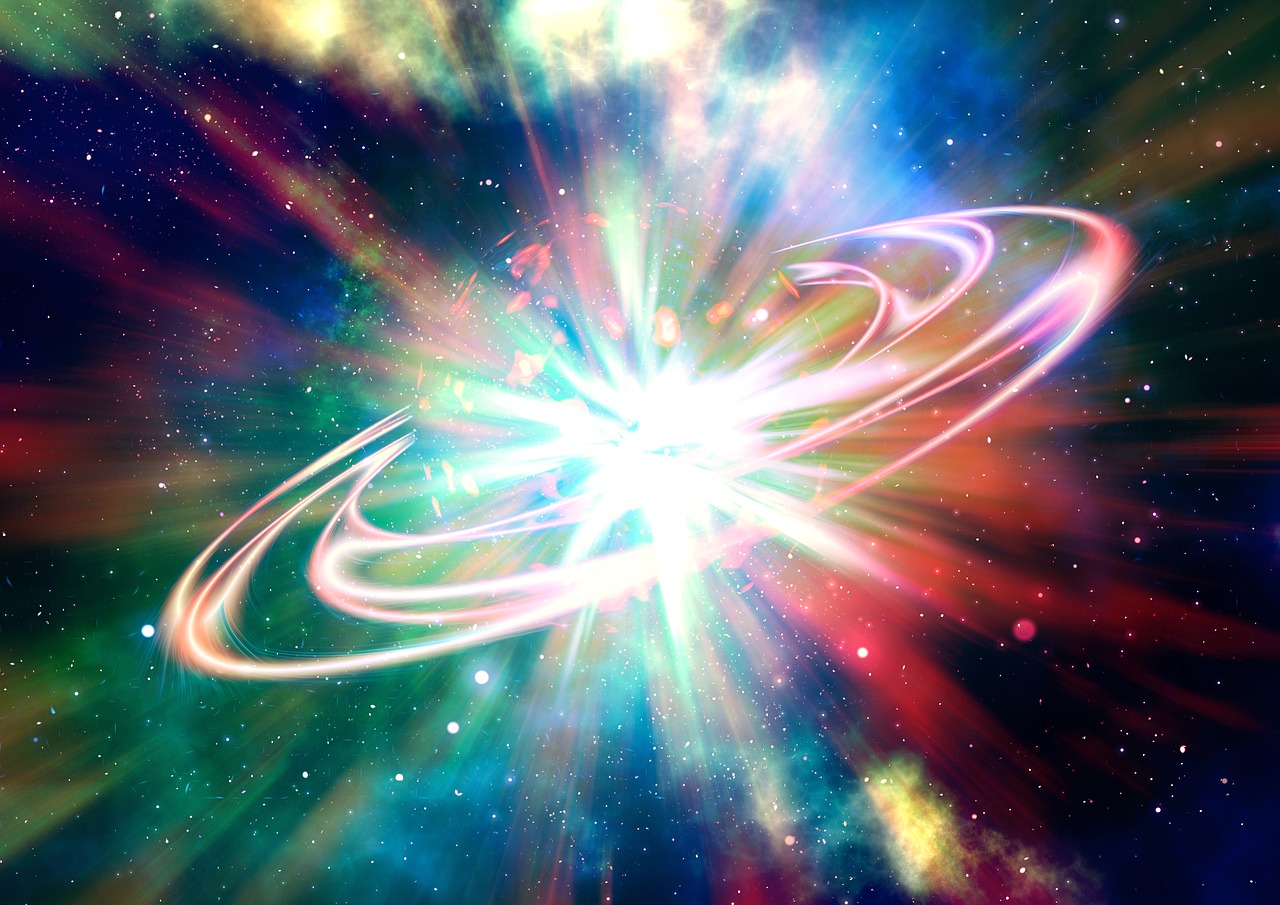 In your blog post titled “The Kalam Cosmological Argument”, you made the statement: “We can infer logically that the cause must have certain attributes given the nature of the origin of the universe. For example, since the cause brought space into existence, it cannot be spacial. Since in order to be spacial, it would have to exist inside of space. But we know that space didn’t exist until The Big Bang. So the cause must transcend space (i.e be spaceless). It must be timeless for the same reason. No time until The Big Bang, so it cannot be inside of time. It cannot be inside of the thing that it’s bringing into existence. It must be immaterial since we know it’s spaceless. Since material objects have mass and therefore occupy spacial dimensions if there are no spacial dimensions until The Big Bang, if the cause were material, it wouldn’t be able to exist.”

I’ve heard many other philosophers make similar statements, and I’ve always agreed and thought this was obvious. However, after pondering this point harder, it now seems to me that one making statements such as the one above I quoted are making an important assumption: The universe is, indeed, all of space-time reality.

If one avoids making such an assumption, it no longer seems impossible (at least logical speaking) that the cause of the universe could be composed of matter. It seems that a proponent of the KCA must presuppose that the universe is all of space-time reality. While I don’t exactly think this is an unwarranted assumption, it still seems like an assumption nonetheless. I’d like to be clear here that I’m not arguing for any specific model like the multi-verse, or some quantum vacuum. What I’m asking is why would it not at least be possible that the cause of our universe is materialistic? If your response is that it is possible, would that not undermine the purpose of the KCA?

I would certainly appreciate any insight you can provide relating to my confusion.

Your question is a very important one regarding the conceptual analysis of The Kalam Cosmological Argument, Christian. In fact, the weight of the evidence is such that this is the approach of contemporary atheistic scientists and philosophers take when trying to avoid the conclusion that our world was brought into being by a Creator. If there was no absolute beginning of all physical reality, then it would be false that we have an ex nihilo miracle caused by a personal, timeless, spaceless, immaterial mind.

First of all, I don’t think we need to prove that the cosmic explosion we call “The Big Bang” really is the ultimate origin. One could concede the models atheistic scientists propose like a multi-verse model, or a quantum vacuum model, or even the wild computer-simulation-run-by-aliens theory, all of which would make The Big Bang only a relative beginning. The important thing for the KCA isn’t whether The Big Bang is the ultimate origin, but rather whether or not there IS an ultimate origin at some point. The problem with multi-verse proposals, quantum vacuum proposals, and even the alien simulation theory is that they would, at best, kick the problem upstairs.

Now, I know you said you weren’t pushing for any particular model, but I think it’s important to show that no attempt currently on the table to subvert the absolute beginning of everything succeeds. And I shall do that in just a moment. To your question, you asked “What I’m asking is why would it not at least be possible that the cause of our universe is materialistic? If your response is that it is possible, would that not undermine the purpose of the KCA?” It depends on what you mean by “possible”. If you mean that it’s logically possible, then I might say yes. If you mean ontologically possible, then no. Moreover, I noticed you used the phrase “Our universe” I would say yes it is both logically possible and ontologically possible that “our universe” could have a temporal, spatial, material cause. But, again, what about that cause? To sweep away the validity of the conceptual analysis, one must get rid of an ultimate beginning altogether, and none of the options currently on the table can do that. They simply push God upstairs rather than eliminating Him altogether.

Let’s consider just two examples on both ends of the spectrum.

A model developed in the 1970s that is popularly called “The Mother Universe Theory” or “The Bubble Universes Model” says that there is a mother vacuum which spawns all sorts of “baby” universes in its “womb”. The mother universe is said to be static and eternal. It’s just the babies that have a beginning. This model has various serious problems. You see, at any point in the quantum vacuum, there is a non-zero probability that a universe would form at that point by a quantum fluctuation, but given infinite past time, universes will have come into being in all places in the quantum vacuum because given any non-zero probability and enough time, eventually that probability will be actualized. In that case, by now, all of those universes will have gotten so big that they would all fill the entire vacuum and collide with one another, join together, and form a massive universe that gives off the appearance of an infinitely old, infinitely large universe…in contradiction to the powerful scientific evidence that tells us that we live in a universe of finite size and age. So as you can see, it’s not enough for these bubble universes to expand in the unchanging mother universe. In order to avoid having the appearance of an infinitely old, infinitely large universe, the mother universe has to be increasing in size as well. But if the mother universe were constantly expanding, then the Borde-Guth-Vilenkin theorem would apply to it, and that means the mother universe had a beginning to its existence and would require a transcendent cause.

Vilenkin writes on page 176 of his book Many Worlds in One:

“It is said that an argument is what convinces reasonable men and
a proof is what it takes to convince even an unreasonable man.
With the proof now in place, cosmologists can no longer hide
behind the possibility of a past-eternal universe. There is no escape;
they have to face the problem of a cosmic beginning.”1

In conclusion, the multiverse can’t be the escape hatch from God that the atheist wants it to be. Even if I were to concede the point to the atheist that a mother universe actually exists, it must have had a beginning, and hence, a transcendent causal agent that brought it into being.

Neil DeGrasse Tyson mentioned this idea in passing when talking about The Big Bang in his book Astrophysics For People In A Hurry. He wrote “Or what if everything we know and love were just a computer simulation rendered for entertainment by a superintelligent alien species?”3

The problem with the idea that the universe is a simulation run by aliens is this: even if it was conceded, it wouldn’t get rid of an ultimate beginning. At best, it would account for our universe’s beginning.

Why do I say that? Well, these aliens had to be born, grow up, go to college and learn computer skills, in order to be able to create our universe. right? That sequence of events presupposes before-and-after relationships. Before-and-after relationships logically entails the passage of time. Therefore, the universe in which our superintelligent alien creators live in is a universe in which time passes. If it’s impossible to traverse an infinite number of moments, then that means that the universe that our alien creators live in must have had a beginning as well! Now, one could say “Maybe that universe is a simulation run by even superior superintelligent aliens. We’re living in a simulation inside of a simulation”. Again, these aliens had to be born, grow up, and learn computer skills before they could actualize the simulation which produced our simulation. That universe had to have a beginning. This problem throws you into an infinite regress of simulations begetting simulations. Since infinite regresses are impossible to cross (i.e our simulation never would have come about), that implies that there must be an ultimate beginning somewhere in the line of simulations. Again, God rears His holy head!

These two attempts to subvert the ultimate beginning of reality aren’t the only ones on the table, but they are currently the most popular. The latter, because it’s so wild and titillates the inner sci-fi nerds in us. But even if they were conceded, they would only go so far to show that the ultimate beginning isn’t at The Big Bang, but farther back.