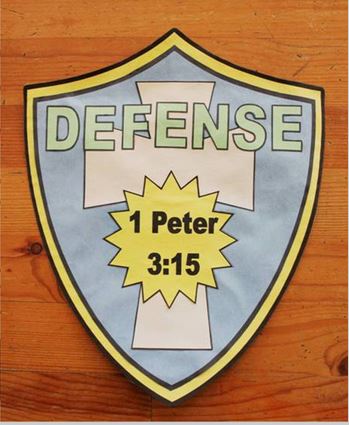 In this day and age of digital communications, the entire planet has become a small village. I can literally have real time conversations with people in other states and even other countries whether through online messaging social media sites such as Facebook and Twitter or on video chat programs like Google Hangouts and Skype. I can write an article and instantly have hundreds of people from many different locations read it at the same time as soon as it comes out, without having to wait for some paper boy to mass deliver physical copies to everyone. The internet is probably the best invention of the 20th century, and yet while it has enhanced man’s capabilities for the better, it has simultaneously enhanced the devil’s capability’s to drag people away from God. And yes, while I am thinking of pornography, I’m also talking about anti-Christian blogs and YouTube videos.

Christian Apologists are always talking about “Your kids will lose their faith when they go off to college if you don’t prepare them now” but what many don’t realize is that they don’t even need to wait for college to be talked out of their faith. Anti-Christian propaganda and pornography have this in common; they are extremely common on the internet and can be found by young children accidentally. If you’ve read my book Inference To The One True God: Why I Believe In Jesus Instead Of Other Gods, you’ll know from the introduction that my first encounter with atheist material was on Twitter back in 2010, not in a college classroom.

Children don’t wait until their teens to use the internet either. Although it was a different time period, my first time using the internet was when I was 8 years old, at the turn of the new century. I had been on the computer before then, but it was only to play computer games like The Magic School Bus and Putt-Putt. I didn’t actually surf the web until later. I suspect that most young children get on the internet at that age even younger, and it’s probably as common as watching TV. Unfortunately, for those not talked into the faith, this is a land mine.

Anti-Christian memes fill the internet. They fill social media. They fill Facebook and Twitter. Atheist blogs are also all over the internet. If your children do a web search for things of a religious nature, it is inevitable that they will come across this material. If your kids don’t have a solid intellectual foundation for their belief, they are likely to have their world rocked. Take it from someone who’s experienced this first hand. My parents didn’t train me in apologetics, and when I was bombarded with objections and questions from an atheist I encountered on Twitter one afternoon, my faith took a lot of damage! Now, it’s not their fault that they didn’t equip me. They didn’t equip me because they themselves didn’t know about apologetics. And they didn’t know because their church never talked about it. I’m the one who taught THEM Christian Apologetics.

My advice to parents who follow this blog is to train your children at a very young age in Christian Apologetics, so that they’ll know the strong arguments and evidence that proves that what we believe is true.

Not everyone is called to be a professional apologist; someone who’s devoted to defending the faith as a full time job. I’m not saying you should be raising future William Lane Craigs. But while not everyone is called to be a career-apologist, we’re all called to be apologists in some sense or another. Some of us are called to be career-apologists, but some of us are called to be side-apologists. What is a side apologist? A side apologist is someone who is prepared to defend their faith and can refute challenges, but may do something else primarily. She might be a nurse, or a missionary, or a police officer, or an attorney. Romans 12:6-8 says we’re all given different talents. However, 1 Peter 3:15 calls us all to be ready to give a defense when someone asks us for the reason for the hope that we have. There are no qualifiers to restrict this to a special few.

Among these, you can also check out William Lane Craig’s series “What Is God Like?” which features two characters named Brown Bear and Red Goose. This series teaches kids about God’s attributes. His omnipotence, omniscience, omnipresence, etc.

Not only are there books aimed at kids, but there are also books aimed at parents specifically about being able to help kids find answers to tough questions, such as…

*”The 21 Toughest Questions Your Kids Will Ask You About Christianity: And How To Answer Them Confidently” by Alex McFarland
*”Keeping Your Kids On God’s Side: 40 Conversations To Help Them Build A Lasting Faith” by Natasha Crain

These are some good resources to help equip your children. So when they come across some meme, blog post, YouTube video, or when they get older and begin to get on social media, where they’re bound to engage in a conversation with a skeptic at some point if they make an effort to spread their faith, they’ll be ready. They won’t be phased by fallacious arguments and rhetoric.

Equip Yourself As Well

If you’re a Christian and you’re not equipped to deal with hard questions and objections. If you can’t give good solid reasons for why one should believe Christianity is true, then you need to equip yourself as well. Don’t just buy a bunch of material for your kids and leave it up to them to study and get prepared. Get prepared yourself. It is important not only so that you can help answer questions your children may be troubled by, but also so that you can be a more effective witness for Christ. Don’t forget, 1 Peter 3:15 doesn’t have any restrictive qualifiers. Everyone should be able to give a reason for the hope that they have. If you’re ill equipped, I would suggest rigorously studying the following books

All of the books I’ve just mentioned are written at a high school level education. They are perfect for people brand new to studying Christian Apologetics.

The Bible says “Train up a child in the way he should go, and when he is old, he will not depart from it.” (Proverbs 22:6). Christianity is true. Therefore, that is the way he should go. Therefore, that is the way you should train up your child. Do this through teaching him sound doctrine and apologetics. Yes, sound doctrine as well as apologetics. If you don’t, then you’re in real danger of your children losing their faith. Not just when they go off to college, but now!

“Your children will go to public school … and they will be trained for somewhere around 15,000 hours in ungodly secular thought. And then they’ll go to Sunday school and they’ll color a picture of Noah’s ark. And you think that’s going to stand against the lies that they are being told?” – Paul Washer, sermon, “The Christian Life,” part 1.

“In high school and college Christian teenagers are intellectually assaulted with every manner of non-Christian worldview coupled with an overwhelming relativism. If parents are not intellectually engaged with their faith and do not have sound arguments for Christian theism and good answers to their children’s questions, then we are in real danger of losing our youth. It’s no longer enough to simply teach our children Bible stories; they need doctrine and apologetics. It’s hard to understand how people today can risk parenthood without having studied apologetics.” – William Lane Craig, “Christian Apologetics, Who Needs It?”

Is There Anything Wrong With The Sinner’s Prayer?