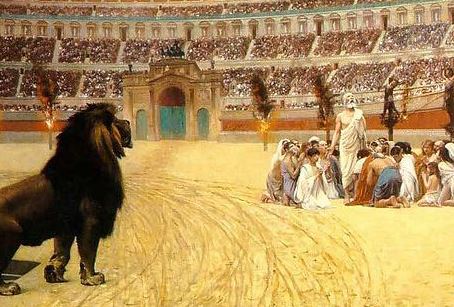 Recently, I posted a link to an article about the recent shut down of the Sweet Cakes Bakery on Todd Starnes’ website. I expressed my anger about the crap that the LGBT continues to pull. Someone commented on this post saying “Persecution
should be something you rejoice over not something that hardens your
heart towards people that need to be saved. They win crowns in heaven
even if they lose their company to the world.”

We Should Rejoice In Persecution’s Results, Not In The Persecution Itself


Now, to defend his position, he appealed to passages like Matthew 5:11-12 “Blessed are you when people insult you, persecute you and falsely say all kinds of evil against you because of me. Rejoice, and be exceeding glad: for great is your reward in heaven: for so persecuted they the prophets which were before you.” and 2 Corinthians 12:10 which says “Therefore I take pleasure in infirmities, in reproaches, in necessities, in persecutions, in distresses for Christ’s sake: for when I am weak, then am I strong.” and “Consider it pure joy, my brothers and sisters, whenever you face trials of many kinds, because you know that the testing of your faith produces perseverance. Let perseverance finish its work so that you may be mature and complete, not lacking anything.” (James 1:2-4) among several others. Now, far be it from me to disagree with the inerrant, inspired, holy Word of God. I don’t disagree with what these passages are saying, but his interpretation of these greatly differs from mine.


I don’t at all think these are saying to literally rejoice in being abused and mistreated, but rather to rejoice in what God will do for us for choosing to endure through mistreatment. Take what Jesus said in Matthew 5:11-12 for example. He said that we’re blessed when people insult us and persecute us. Why? Because great is our reward in heaven. He says we’re blessed through persecution because God will reward us for enduring it. He will reward us, and we rejoice over the fact that we will be rewarded. The parallel passage in Luke 6:23 says the same thing. “, “Rejoice in that day (persecuted day), and leap for joy, for behold, your reward is great in heaven; for so their fathers did to the prophets.” Likewise, in James 1, James says to welcome our trials with gladness because they’ll improve our moral character. Our trials are a test of our faith which produces perseverance, and we should let perseverance finish its work so that we will be mature and complete, not lacking anything. This also seems to be what Paul was alluding to in 2 Corinthians 10:12, “For when I am weak, then I am strong.”. In an ironic and paradoxical sense, Paul’s weakness was actually his strength. All of the stuff he went through developed his character.


In addition, I would say that the biblical authors are employing the figure of speech known as metonymy. What is metonymy? Metonymy is a “change of name”, the substitution of words. It’s when the cause is put in place of the effect, or when the effect is put in place of the cause. An example of metonymy would be if I said “I hate Rage Against The Machine”. Now, by saying that, I clearly don’t mean that I have a personal hatred of the members of that band, just that I really, really don’t care for their music. I put the band in place of their music. I don’t hate the singer, the guitar player, the dummer, etc. I hate the music. Likewise, when scripture says “Rejoice in persecution”, this is probably a metonymy for “Rejoice in what God has in store for you for enduring persecution!”


Should we rejoice in persecution? I
rejoice that God will reward us for enduring it, but not that it
happens. Just as I rejoice over the fact that God can bring a greater
good out of suffering, but I don’t rejoice in the suffering. I rejoice
that Christ redeems us from sin, but I don’t
rejoice over the fact that sin entered the world in the first place. I
once heard a preacher say “God can work all things for the good of those
who love him, but that doesn’t mean all things are good. Just that
they’re worked out for the good in the end”. There’s a difference between rejoicing in what God will bring out of the persecution, and rejoicing in the persecution itself. We should definitely rejoice in the former, but not rejoice in the latter. Now, you might be wondering “Why not? Why even make this distinction? This leads to my next subheading.

The Bible Is Clear That We Should Hate Sin And Evil

Perhaps the biggest reason why I take the interpretation that I do of the rejoice-in-persecution passages is that if we took these verses the way my OP’s commenter is taking them, it would lead to a contradiction in scripture. My argument from this premise flows as follows:

1: The Bible says is numerous places to hate evil and sin
2: Surely persecuting God’s people is a grave sin indeed
3: Therefore, we should hate the persecution of God’s people.


This is a logically valid syllogism. It takes the logical form known as modus ponens. If the premises are true, the conclusion follows logically and necessarily. Are these premises true or false? They are true. Let’s look at the first premise. This premise is clearly true. Psalm 97:10 says “Let those who love the LORD hate evil, for he guards the lives of his faithful ones and delivers them from the hand of the wicked.” Proverbs 8:13 says “The fear of the LORD is to hate evil; Pride and arrogance and the evil way And the perverted mouth, I hate.”  Romans 12:9 says “Love must be sincere. Hate what is evil; cling to what is good.” These passages are overwhelmingly clear. Those who love and fear God will hate what is evil. The first premise is established.


What about the second premise? It would seem to me to be just as indisputable as the first premise! If you deny this premise, then what you’re asserting is that when a Muslim terrorist chops the head off of a pastor in Iraq or Afganistan, he isn’t committing a sin! Surely this is wrong headed! Isn’t one of The Ten Commandments “You must not murder” (Exodus 20:13)? Surely a terrorist chopping the head off of a pastor is murder right? Well, if it’s murder, and God said not to murder, then it follows that terrorists chopping the heads off of Christians is a sin. This also applies to Caesar back in the early days of the church, when he would have Christians executed for not burning incense to him and declare “Caesar is Lord”. He was sinning when he had those Christians killed because they had done nothing wrong. It was an unjust killing, and that is the definition of murder, and murder is a sin (Exodus 20:13). This also applies to those people who threw Christians to the lions for their entertainment. Isn’t getting enjoyment out of watching innocent people being torn to shreds sinful?

Now, as for minor, non-lethal persecutions like we’re experiencing in the United States [1]I’m hesitant to even call them persecutions because they are so tepid compared to what our brothers and sisters in the middle east are going through, I would say these are sinful as well. Both the Old Testament (Leviticus 19:18) and The New Testament (Matthew 22:39) say “Love your neighbor as yourself” . Now, most people take this statement to mean that you should take care of your fellow man’s needs in the same way that you take care of your own needs. You make sure that you have food, water, shelter, medicine, etc. So if you should make sure that your nearest neighbors have those as well. Put as much effort in taking care of your neighbor as you do in taking care of yourself. Jesus uses our self-love as the standard by which we are to love others. Now, would anyone honestly say that running someone out of business for not baking them a cake, or sending their children death threats, or smearing their reputation, or calling them bigots, is loving one’s neighbor as oneself? Would you shut your own business down and send death threats to your own kids? I didn’t think so. It follows then, that the LGBT are not following the biblical command set down in Leviticus 19:18 and Matthew 22:39. And if they’re not following the biblical command, then they’re sinning, since disobeying God — by any theologian’s standard — is sinful. By the way,  let’s take a look at what Romans 13:10 says “Love does no wrong to its neighbor. Therefore love is the fulfillment of the Law.” Romans 12:18 says “If it is possible, as far as it depends on you, live at peace with everyone.” Are the LGBT trying to live in peace with the church or are they waging war? Obviously it’s the latter.

It would seem then that both premises are true. Therefore, the conclusion is also true. We should hate the persecution of God’s people.

As I said earlier in this blog post, I rejoice that God will reward us for enduring mistreatment, but not that people choose to mistreat us. I rejoice over the fact that God can bring a greater good out of suffering, but I don’t rejoice in the fact that the suffering is taking place. I rejoice that Christ redeems us from sin, but I don’t rejoice over the fact that sin entered the world in the first place. Moreover, there’s a difference between rejoicing in what God will bring out of the persecution, and rejoicing in the persecution itself. Moreover, The Bible says is numerous places to hate evil and sin, surely persecuting God’s people is a grave sin indeed, therefore it follows logically that we should hate the persecution of God’s people.

I Haven’t Met My Wife, But I Already Know I Love Her