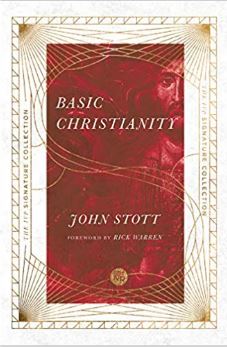 “Basic Christianity” by John Stott is a really good premiere to the Christian faith. This is as much a Crash Course In Christian Doctrine as it is a defense of it. Stott combines evangelistic zeal and apologetics in this timeless classic, first published in 1958 and revised in 2008 shortly before Stott’s death in 2011 at the age of 98.

The book is divided in PARTS. Part 1 is “Who Is Christ?” In this section, Stott examines the person of Christ. Stott makes the case for Christianity by defending the deity of Christ and the resurrection of Christ. Stott agrees with myself and other defenders of the historicity of Christ’s resurrection that all questions of which worldview and which religion to adhere to can all be answered by determining the answer to whether Jesus claimed to be God and whether He died on the cross and returned from the dead.

Stott explains in his own words “There are two main reasons why our investigation into Christianity should begin with the person of Christ. The first is that, in essence, Christianity IS Christ. Who Christ is and what he has done are the rock upon which the Christian religion is built. If he was not who he said he was and if he did not do what he said he had come to do, then the foundation is undermined the whole thing will collapse. Take Christ from Christianity and you remove the heart from it; there is practically nothing left. Christ is the center of Christianity; everything else is peripheral. …….Once we accept that Jesus Christ is a uniquely divine person, many of the knots we get into with religion begin to untangle. For one thing, the divinity of Jesus helps us sort out questions about who God really is and what he is like. But it doesn’t stop there. For if it’s true that Jesus is divine, then it follows that what he taught must be true. And that sheds light on all sorts of important issues to do with Christian faith — such as (as we shall see) the purpose of life, what happens after death, the place of the Old Testament and the significance of the death of Jesus on the cross.” (pages 29-30).

In the pages that follow, John Stott goes on to make a compelling case for what William Lane Craig and I would call “The Divine Self-Understanding Of Jesus” by examining Jesus’ own claims, the claims of his followers, and His actions. Stott makes it clear that he isn’t quoting from the gospels as if they were inspired scripture, he is merely treating them as what they undeniably are; documents that claim to record the life of Jesus Of Nazareth. This is the correct approach to take with non-Christians as they do not believe The Bible is divinely inspired and won’t believe what it says just because it says what it says. However, I think Stott’s case for the divine self understanding of Jesus would have been more powerful if he had employed “The Criteria Of Authenticity” to the text; the criterion of multiple attestation, the criterion of embarrassment, the criterion of enemy attestation, the criterion of dissimilarity, and so on as I do in my own book “My Redeemer Lives: Evidence For The Resurrection Of Jesus” and as Gary Habermas does in his book “The Case For The Resurrection Of Jesus”. I could easily imagine the skeptic reading Stott’s scripture citations and thinking “Well what if the gospel author just fabricated that?” and “How do we know Jesus really said those words?” to which Stott could have responded “The author couldn’t have made this up because it’s recorded in 3 independent sources” or “This puts the disciples in an awkward position. Why would the gospel author tell the story like this if this isn’t really how it went down?” I knew how the criteria could be applied to many of the passages he cited, which is why I found them to be convincing arguments. I read the application between the lines as it were. But for a lot of people, they could brush these divine claims of Jesus as fabrication of The New Testament authors.

After looking at the CLAIMS of Christ in chapter 2, which establish his divine self understanding, he then examines the CHARACTER of Christ in chapter 3. Stott makes observation that the most holy people, those closest to God, usually have the highest sense of their own sinfulness, and even spends one page recounting the life of a missionary named David Brainerd. Brainerd seemed to all appearances to be a saint of the first order, yet in his biography used some pretty self depriciating language, including “A poor worm”, “a dead dog”, and “an unspeakably worthless wretch.” Yet, Jesus, who was closer to God than anyone ever has been, had no sense of his own sin. He explicitly claimed on occasions to be without sin. And the sins his enemies accused him of either weren’t actually forbade by Old Testament scripture, but by the Halakah (rules the Jewish leaders built to help keep the Torah), or weren’t sins because He is actually God (i.e charges of blasphemy for claiming to forgive sin).

In chapter 4, the final chapter of “Part 1: Who Is Jesus?” Stot makes a historical case for The Resurrection Of Jesus. This was a pretty good chapter to read. Stott makes a compelling case for the historicity of the resurrection. Although he doesn’t explicitly employ the criteria of authenticity as defenders of the resurrection such as myself, William Lane Craig, and Gary Habermas do, he does employ them implicitly. That is, the logic behind why we ought to believe Jesus’ tomb was empty and he was seen by many individuals. In the midst of his positive case from the facts of the missing body and various postmortem appearances, Stott refutes theories that attempt to account for these facts without appeal to the miraculous resurrection. Much more could have been said about the evidence for the resurrection. After all, entire books have been dedicated to it. However, Stott made a convincing case for Jesus’ resurrection within the small amount of space he had available to him.

After having made a brief case for the TRUTH of Christianity, Stott moves on. Part 2 is called “What We Need”. In this part of the book, Stott explains the seriousness of our sin and our need for a Savior. He points to the scriptures that speak of the universality of sin, and he goes through each of The Ten Commandments to show the reader how all of us have broken at least some of these most basic rules. This is a tactic I’ve seen Ray Comfort used, and I’ve used it myself. Then, John Stott explains the EFFECTs of sin. He explains that The Bible teaches that sin is an integral part of us. Sin is a disease we have that predisposes us to evil. Sin and sins (plural) separate us from God and can even damage our relationship with each other. We are all sick, and God provided Christ Jesus as the cure by His death and resurrection.

Part 3 is called “What Christ Has Done”. In this part, Stott explains the importance of Jesus’ work on the cross in atoning for our sins. He also explains how to receive Christ’s offer of salvation. In the final part of the book, Stott explains what it means to be a Christian, to live out the Christian life.

This is an excellent book and I would recommend it to every person who is not a Christian. This book provides a brief defense to Christianity at the very beginning, thus answering the question “Why should I believe Christianity is even true in the first place?” It then goes on to explain the gospel, why Jesus had to die, what Jesus did for us, and how we can come into a relationship with this great and awesome God. If anyone is looking for a “Christianity 101” type of book that isn’t overwhelming in content, but just explains the basics of that which we call the gospel, I can think of no better book than “Basic Christianity” by John Stott.

My Rating Of This Book
 4/5
Become a Patron!
Liked it? Take a second to support Evan Minton on Patreon!

BOOK REVIEW: “Chronicles Of The Nephilim” by Brian Godawa