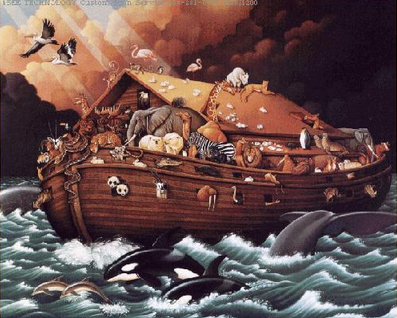 The epic of Gilgamesh is a story that closely parallel’s the biblical story of “Noah’s Ark”. Because of its similarity, this has caused people to doubt the historicity of the Genesis flood. There are other reasons people doubt the historicity of the flood account as well, but many of these objections presuppose that The Bible teaches a global flood, a flood that covered the entire planet Earth (In another blog post, I gave solid scriptural reasons why a local flood interpretation is more plausible). So for many of these objections to the Noah’s Ark story, I would agree. I’d be like “Yeah, I agree that it stretches the bounds of plausibility to think that every single species of animal on the planet all got on one boat. I believe Noah only had to gather animals from the Mesopotamian region. So…he only had to accommodate a couple thousand rather than millions or billions.” However this objection doesn’t presuppose anything about the extent of the Genesis flood. This could possibly pose a challenge to anyone who takes the Noah’s Ark story as history. Why is that?

Well, because the story of Gilgamesh is so strikingly similar to the story of the Genesis flood, this prompts people to think that whoever wrote Genesis plagiarized these ancient myths and incorporated them into his own story. Gilgamesh

*Flood occurs in the Mesopotamian plain.

*Main character is told to save himself, his family, and a sampling of animals

*The boats were sealed with tar

*The boats came to rest on a mountain

*Birds were released to determine if the waters receded

So what do we do with this evidence? Did the events of Genesis 6-9 not really happen? What does this say about biblical innerency, and divine inspiration? How could God and why would God inspire the writer of Genesis to write something down that didn’t occur? Why would God have Moses plagiarize an ancient myth?

To me, this seems to be a bad argument against the historicity of Noah’s Ark. Saying that Noah’s story was copied from the epic of Giglamesh because it predates the writing of Genesis is to commit the post-hoc ergo propter hoc fallacy. That in no way proves that Genesis is a myth. Moreover, even though the writing of Genesis post-dates the Gilgamesh epic, I believe the events in Genesis certainly did not. If the Genesis flood actually occured, it could be that the Gilgamesh epic was a distorted version of the Genesis flood after being unreliably passed down through oral traditions (in cultures that didn’t have the same tips and tricks that Jews had in which they preserved oral tradition). Who’s to say that Genesis copied from Gilgamesh. Maybe Gilgamesh copied from Genesis if it’s the case that the Noah’s flood actually happened as The Bible says it does. Even though Gilgamesh postdates the book of Genesis, it could be that the events of Genesis predate both, if in fact the flood actually occurred. Quite frankly, that argument commits the same logical errors as those claiming Christ was copied from pagan myths (I refuted the Christ Myth argument elsewhere).

IF the Genesis flood actually happened in real life, then I think it’s entirely possible that, if any borrowing were done at all, Gilgamesh and Atrahasis copied from an actual historical event. The argument is question begging since it assumes the event never really happened. Just because Genesis came after those things doesn’t mean it’s the cause of those things. This is the same mistake Christ-mythicists make. The fictional TV show “Star Trek” preceded the launch of the US space shuttle but that doesn’t mean the newspaper headlines the next day were influenced by Star Trek episodes. Similarity and post-dating doesn’t prove anything. It’s post-hoc ergo propter hoc reasoning.

We all have to deal with the same evidence. However, your presuppositions will color your interpretation to some degree. If you presuppose that The Bible is false, then you already believed that the story of Noah’s Ark was a bunch of hooey. You already believed that it was a myth, so you’re more likely to interpret Gilgamesh as evidence of biblical plagiarism. But if you believe The Bible is true (like I do) or if you’re at least open to the possibility of it being true, you might interpret this as evidence that something like Noah’s Ark actually happened, and that two different sources are telling the same story in different ways. Gilgamesh actually could be used as corroborating evidence for the flood. It all depends on how you interpret the evidence. And it also depends on what your presuppositions are.

I for one, think that the above scenario is true. For several reasons. As I’ve written several times elsewhere, if it can be historically demonstrated that Jesus made claims to deity and if it can be historically evidenced that He died and rose from the dead, then anything Jesus taught about any topic carries a lot of weight! A lot of weight! I happen to think that the historical evidence for Christ’s death and resurrection is very powerful. Click on this link to read about it.

Jesus taught that the flood was history. Jesus mentioned that the days before His second coming would be similar to the days of Noah (Matthew 24:37). “For just as the days of Noah were, so the presence of the Son of man will be. For as they were in those days before the flood, eating and drinking, men marrying and women being given in marriage, until the day that Noah entered into the ark; and they took no note until the flood came and swept them all away, so the presence of the Son of man will be.” If these events were not true then Jesus would be a liar and if He was a liar, He would not be our Savior. He could not be God if he treated myth as history, fiction as fact.  Jesus would never have mentioned them as having happened if they were only analogies or fables. But He did talk about them as if they actually happened. Moreover, Jesus claimed to be God and backed it up with His resurrection as the historical evidence shows. Therefore, we should be quick to believe Jesus and skeptical of the skeptics who try to deny the historicity of the flood. After all, God knows what happened. He was there.

Moreover, just like the “Christ-copied-Pagan-Deities” argument, the differences outweigh the similarities in these two stories. Richard Deem notes the differences in the article below.

If The Flood Was Local, Why Didn’t God Just Tell Noah To Move?

Genesis 6-9: The Extent and Historicity Of The Flood