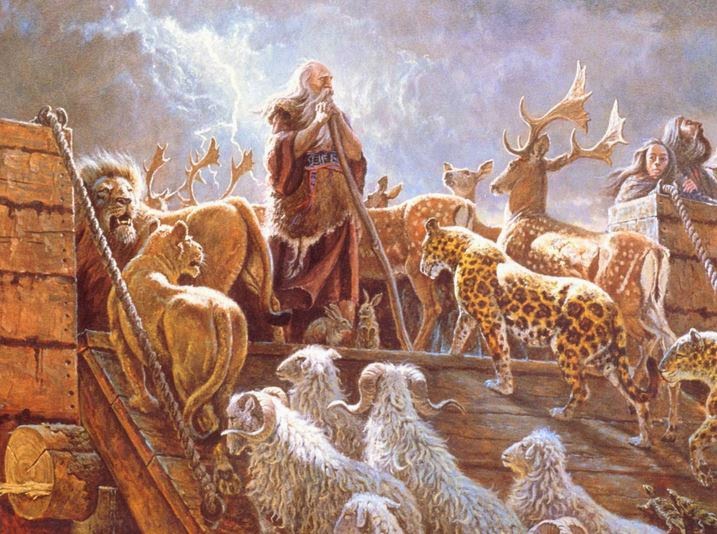 There is a divide within the body of Christ over the first few chapters of The Bible. It’s this issue of Young Earth VS. Old Earth Creationism. This debate is generally over whether the “days” in Genesis 1 are 24 hour days or whether they are long time periods. Both Old Earth and Young Earth Creationists take Genesis 1-11 to be historical events, and not allegory like many of our Theistic Evolutionist brothers and sisters. However, the debate extends beyond just the length of the creation days, but old earth and young earth creationists also debate over the extent of the flood in the story of Noah’s Ark. Did it cover the entire planet or not? My view is both that the days in Genesis 1 are long time periods and also that the extent of the flood in Genesis 6-9 is not global, that is to say, it did not cover the entire planet.

Now, I came to this conclusion that the flood is local based solely on the scriptural evidence. I have no idea how geology disproves the possibility of a global flood. I love science, and I know a lot about astrophysics, astronomy and I know a moderate amount about biology, but geology is a science that I know very little about. Therefore, one cannot charge me with being a local flood advocate on the basis of modern science and say that I’m forcing this interpretation on the Bible in order to fit the scientific evidence. That’s not true at all. I don’t know how geology relates to the idea of a global flood. The reason I changed from believing a global flood to believing a local flood is based solely on the biblical data. In this blog post, I will share those reasons with you.

1: In Hebrew, The Word For Earth Did Not Always Mean The Entire Planet.

The Hebrew word for Earth is “Erets” and, like many Hebrew words, it has mutliple literal definitions. It can mean the entire globe, it can be a very large portion of land, or it can mean the ground you’re standing on (i.e dirt). This means when Genesis says water covered “the surface of the earth”, there’s wiggle room to say that it just covered a large portion of land (the entire Mesopotamian plane). In fact, this less than global usage can be clearly seen from other texts used in scripture. This is obviously not an exhaustive list, but these are just three examples of a less-than-global usage of the term “whole earth” (i.e “kol erets”) in The Bible.

“The name of the first is Pishon; it flows around the whole [kol] land [erets] of Havilah, where there is gold.” – Genesis 2:11

“And Jonathan smote the garrison of the Philistines that was in Geba, and the Philistines heard of it. Then Saul blew the trumpet throughout [kol] the land [erets], saying, “Let the Hebrews hear.” – (1 Samuel 13:3) (Obviously, Saul could not have blown a trumpet loud enough to be heard around the entire planet)

Obviously, the description of kol erets is modified by the name of the land, indicating a local area from the context. We know this because geography tells us that the Pishon and Gihon rivers do not in fact travel around the whole globe. In fact, the term kol erets is nearly always used in the Old Testament to describe a local area of land, instead of our entire planet. Although Kol Eretz was indeed used sometimes to describe the entire planet, most of its usages in the OT refer to just a large portion of land.

2: Other Creation Accounts In The Bible Seem To Prohibit The Genesis Flood Being Global.

Psalm 104 is a poetic, non-chronological version of Genesis 1. It talks about God’s creative activity during the creation days (ages).  Psalm 104:9 seems to argue against a global flood “You set a boundary they (the ocean waters) cannot cross. Never again shall they cover the earth”.

If Psalm 104 is talking about the creation week, then obviously, God swears that water will never cover the entire planet again after He formed the landmasses through aggressive tectonic activity. This means that this passage prohibits a global flood interpretation. So the word “Earth” in Genesis 6-9 must mean something less than the entire planet, perhaps the entire Mesopotamian plane, which is fine. The Hebrew word for Earth is Eretz and it has, like many Hebrew words, it has multiple literal definitions (as I’ve just pointed out). I think it’s clear that Psalm 104:9 uses “eretz” in the global sense while Genesis 6-9 uses it in a less-than-global sense. Job 38-41 contains a similar passage which prohibits the Genesis flood being global. So The Bible itself teaches that the flood is local, not global.

The word “eretz” is used in both the account of Noah’s flood as well as in Psalm 104:9. They both cannot mean the entire globe if Psalm 104 truly is an account of God’s creative activity during the creation “week”. So one usage of Eretz must mean “the entire globe” while the other usage must mean something less than the entire globe, like “a large portion of land” or “the ground”. If you affirm that both usages of eretz means the entire globe, you’ve got a contradiction in The Bible and therefore The Bible is no long inerrant. Most young earth creationists are strict innerentists, and I don’t blame them. God’s word containing errors would have troubling theological implications. I believe in the innerency of The Bible too despite what some young earthers would angrily tell you. That’s why I interpret one usage of eretz as meaning the whole world while interpreting the other usage in the Genesis flood account as meaning a large portion of land. And what am I doing here? Am I reading geology into scripture? Am I elevating science above what the word of God says as many young earth creationists accuse me and my other old earth brothers in Christ of doing? No. I am letting scripture interpret scripture. Letting scripture interpret scripture is a very basic rule in biblical hermeneutics.

However, in order for YECs to maintain biblical innerrency, it seems like they would have to abandon the global flood interpretation.

3: The Way The Bible Describes The Water Receding Suggests A Less-Than-Global Flood.

The method by which the flood ended also tells us that the flood was local. According to Genesis, the water receded and was dried by the wind (see below). If the flood were global, there would be no place for the waters to recede to. Likewise, a wind would not significantly affect a global flood, further suggesting that the Genesis flood was local in extent.

“But God remembered Noah and all the wild animals and the livestock that were with him in the ark, and he sent a wind over the earth, and the waters receded.” – Genesis 8:1

“The water receded steadily from the earth. At the end of the hundred and fifty days the water had gone down,” – Genesis 8:3

“The waters continued to recede until the tenth month, and on the first day of the tenth month the tops of the mountains became visible.” – Genesis 8:5

4: Interpreting The Word “Earth” As Meaning The Entire Planet Brings You To a Bizarre Conclusion At The End Of The Noah’s Ark Story.

This was humorously pointed out by Christian Apologist Richard Deem on his website www.godandscience.org. He pointed out that if you interpret the phrase “whole earth” in Genesis 6-9 as meaning the entire planet, then what that means is that The Bible says that the entire planet dried up and became a desert! The oceans, lakes, ponds, puddles, all bodies of water evaporated from the planet! Just take a look at the biblical passages below to see why.

“Then it came about at the end of forty days, that Noah opened the window of the ark which he had made; and he sent out a raven, and it flew here and there until the water was dried up from the earth.” – Genesis 8:6-7, NASB

“After forty days Noah opened the window he had made in the ark and sent out a raven, and it kept flying back and forth until the water had dried up from the earth.” –  Genesis 8:6-7, NIV

“Now it came about in the six hundred and first year, in the first month, on the first of the month, the water was dried up from the earth.” – Genesis 8:13a, NASB

“By the first day of the first month of Noah’s six hundred and first year, the water had dried up from the earth.” –  Genesis 8:13b, NIV

“and in the second month, on the twenty-seventh day of the month, the earth was dry.” –  Genesis 8:14, NASB

“By the twenty-seventh day of the second month the earth was completely dry.” – Genesis 8:14, NIV

If one were to interpret these verses from a global perspective, one would have to conclude that the entire earth became a desert after the flood. Obviously this interpretation is false. In these verses, the dryness of the earth is obviously referring to the local land area and not the entire planet Earth.

As you can see, I’ve shared with you several reasons from The Bible why the local flood interpretation is more plausible than the view that the flood covered the entire planet. I did not appeal to science at all in this blog post. I only looked at what the scriptures say. You know, it upsets me when young earth creationists charge people like me with compromising what The Bible teaches when we hold a view that is consistent with modern science. I value God’s Word more than any other book I’ve ever read. It guided me to salvation several years ago, and has been guiding me in my walk with Christ ever since. It is a lamp unto my feet, a light unto my path (Psalm 119:105). I build my life upon what it says (Matthew 7:24-27). I would never try to twist what it says simply to suit my fancy or to make it more palatable to someone who can’t bring themselves to accept what it says. I think the local flood interpretation is more plausible than the global flood interpretation based on what The Bible says.

Tags: Age Of The Earth

If The Flood Was Local, Why Didn’t God Just Tell Noah To Move?

Q&A: Are The Nephilim Still Around?