There are myths about homosexuality floating about. These
myths are perpetuated by both Christians and non-Christians alike. I’m going to
express my views on three of these common homosexual myths. I am loathe to talk
about homosexuality where non-Christians are probably going to hear or read
about it. It’s such an extremely sensitive topic that I have to word things
very, very carefully so as not to not offend unnecessarily while at the
same time not compromise biblical truth. If you get upset at this post I want
it to be because of what I said, not in how I said it.  Nevertheless, this is an important issue to
talk about, especially since misconceptions about it are barriers people have
to coming to faith in Christ (misconceptions such as thinking that God hates
gay people, that Christians hate gay people, which I’ve addressed in a prior
post). are other misperceptions that people have about homosexuality that I
shall address in this post. So, let’s get to it.
1: Being Gay Is A Choice.
Many Christians will preach that homosexuality is a choice.
They will take this stance against those who say that they were born gay. I
think that it’s beyond implausible to think that homosexuals are homosexuals by
choice. I mean, do Christians honestly expect me to believe that a guy is just
walking down the street one day and thinks “You know what? I think I’ll be
homosexual now. I’ve never been a homosexual before and I’ve never had sex with
other men, I think I’ll do this from now on.” NO. I don’t think
being attracted to the same sex is a conscious decision someone suddenly makes
some day. Just think about it for a moment: At what moment did you decide to be
a heterosexual? I cannot recall a single moment where I made the conscious
decision to be sexually attracted to women. It should be said that although I’m
skeptical that “being gay is a choice”, I’m equally as skeptical that gays are
“born that way”.
2: If You Think
Homosexuality Is Sinful, You’re Not Doing What Jesus Wants Us To Do, Which Is
To Be Accepting Of All People.
I agree that we need to accept all people. Jesus called on
us to be loving towards others. Scripture calls us to love God, to love our
neighbor, fellow Christians, and even our enemies (Matthew 22:37-39, Mark
12:30-31, Luke 10:27, Matthew 5:38-44). Nevertheless, that does not mean we
need to accept homosexuality as a legitimate lifestyle. The Bible certainly
does not (read Romans 1:26-28, 1 Corinthians 6:9-11, 1 Timothy 1:10). We can
show love and extend friendship towards the homosexual without necessarily
approving of his lifestyle (For more on this, see my previous blog post “Do Christians Hate Homosexuals”). Despite what the postmodernists might tell you,
you do not need to accept all ideas as equally valid in order to be accepting
towards all people.
3: God sends people to
Hell simply for being attracted to the same sex.
I don’t think God would keep people out of heaven for merely
having a certain kind of attraction. I do think He’d punish people for acting
on those attractions. One is sinning only when they act on their homosexual
attractions (having homosexual sex, watching gay porn, looking at a man to lust
after him etc.) But I don’t think God is angry at someone for merely having a
certain kind of attraction. Nor should he be for that’s something we can’t
control. I remember Rick Warren saying in a sermon that he may not be able to
control whether he’s attracted to women other than his wife, but he can
certainly control whether he acts on those attractions. The one who has
homosexual attractions do not have to act on those attractions any more than
the married heterosexual man has to commit adultery.
I do believe also that God has helped some people overcome
their homosexual struggles, “curing” them (for lack of a better word) of their
homosexual attractions. I’ve heard many testimonies and Paul is even writing to
people in Corinth who used to struggle with homosexual attractions (1
Corinthians 6:11) Nevertheless, there are many who, no matter how hard and how
long they pray, no matter how much counseling they get, no matter how much
Bible study they do, cannot seem to force themselves to be attracted to the
opposite sex. Why God helps some people stop being homosexuals and not others,
I have no idea. For some people, God’s will for them may be to live a celibate
life. And God knows that if he doesn’t “cure” them of their homosexual
attractions, they would, out of love and reverence for Him, simply abstain from
sexual activity altogether.
Someone in an apologetics group I was in had a family member
like that (see below). I concur with everything he said. 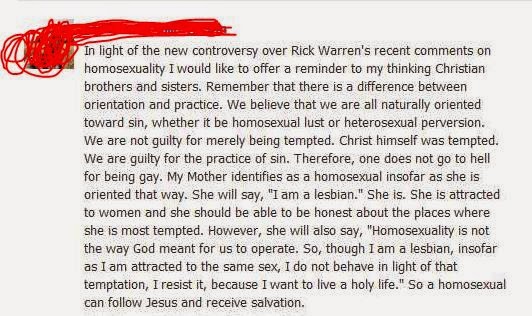 When it says for example that “homosexuals
will not inherit the kingdom of God“ (1 Corinthians 6:9), I believe it’s
referring exclusively to homosexuals who disregard natural law and go about “lying
down with a man as one would with a woman” (Leviticus 18:22). Not someone who merely is sexually attracted to people
of the same gender but does nothing about it. Scripture is rebuking and warning
people engaging in sinful activity.
Liked it? Take a second to support Evan Minton on Patreon!

What Does The Bible Say About Reincarnation?