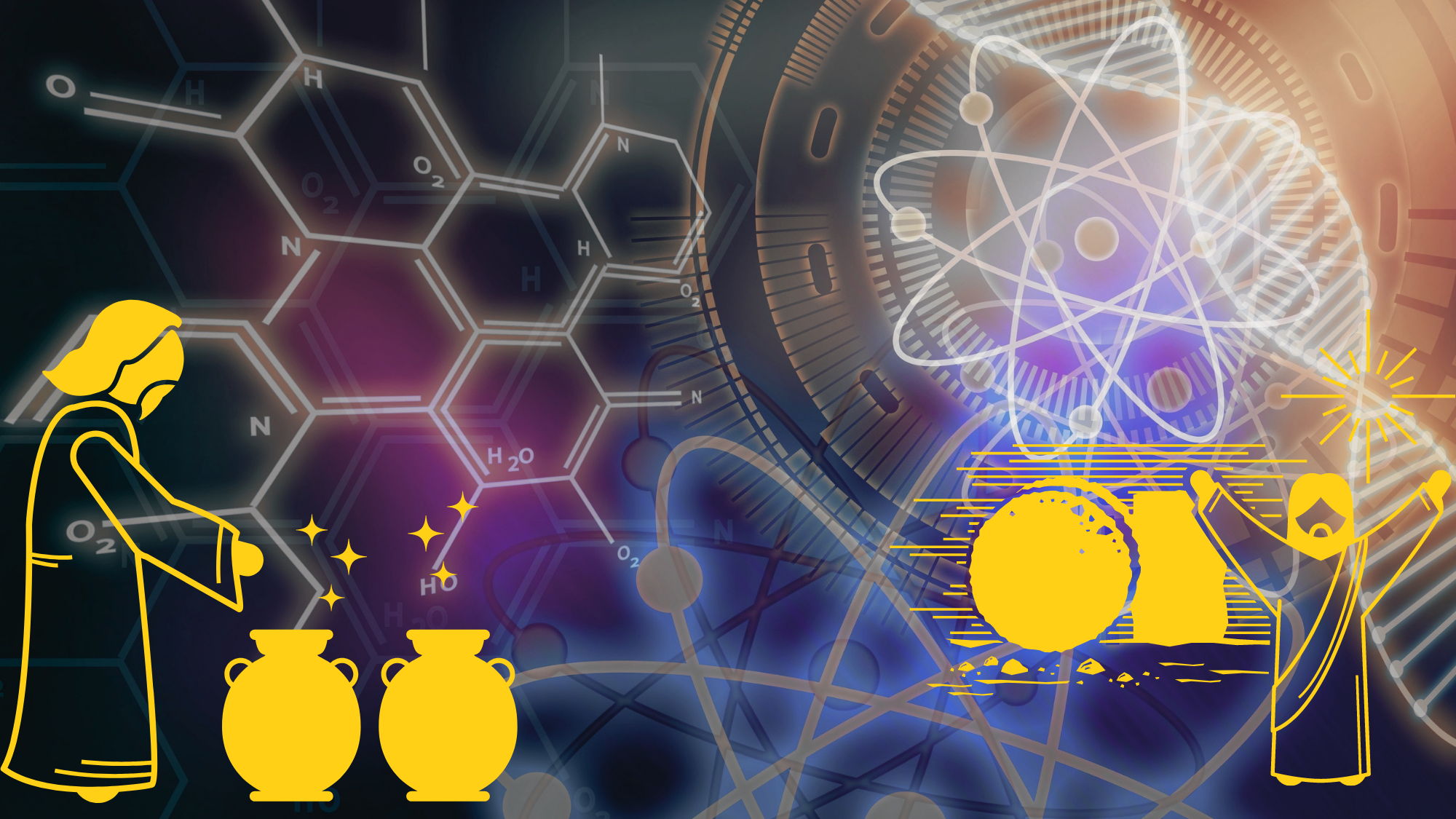 Peace of Christ, Mr. Minton, may God fill your mind with wisdom and heart with love. Recently I learned of a newer tactic to deny miracles. It’s an appeal to the unknown natural. I’ll give you a basic presentation of it from the perspective of an atheist (fake persona).

Based on the way your role played atheist presented the argument from the unknown natural, there are a couple of different ways to answer this depending on what Hector Aaron meant by it.

One possibility is that you/Hector Aaron is arguing is that a natural explanation to account for a purported miracle claim (say, the origin of the universe, the fine-tuning of the universe,1 or the minimal facts surrounding the death of Jesus and the birth of Christianity) exists, and we just haven’t found it yet. If we just waited a little while, eventually science would yield a tenable naturalistic answer, and no miracle actually occurred.

If this is the claim, then you’re right to write it off as The Escape To The Future fallacy. Maybe science will one day show that God is not needed to explain the origin and fine-tuning of the universe. Maybe some day science will show the universe to be eternal and not as finely tuned as we once thought (maybe 300 years from now, scholars will determine that really, each constant and quantity has a 1 in 10 chance of being life permitting rather than the huge numbers we see today). It’s possible, and we have to be open to that possibility. Science is always advancing, and new theories sometimes completely replace old ones. Sometimes entirely new paradigms are established. But the atheist who appeals to this mere possibility to try to argue that we are not justified in affirming that a spaceless, timeless, immaterial, uncaused, powerful Creator is behind The Big Bang, or that the best explanation for cosmic fine-tuning is Intelligent Design, then he’s being fallacious. One way to demonstrate this fallaciousness is to show what would happen if this reasoning were applied consistently.

If one is not justified in affirming conclusion X on the basis that there’s a small (even miniscule) possibility that X could some day be overturned, then no scientific hypothesis could ever be accepted. Why? Because there’s always the possibility, even if it’s a 0000000.1% chance, that new discoveries could come along and overturn the current paradigm. Thus, no conclusion could ever be accepted in science. Yet, that doesn’t stop the atheist from getting on his soap box about how Christians are in denial about the overwhelming evidence for Darwinian macro evolution. As an Evolutionary Creationist, I do think the evidence for evolution is overwhelming. I would be in agreement with the atheist here. However, I think it’s funny how the science is unquestionable for the atheist when it supports conclusions they like. But when it starts pointing to God, all of a sudden they’re like “Well, you know, science is always changing. What’s true today may not be true tomorrow. Heh heh.”

We need to follow the evidence wherever it leads now. NOT where it may or may not lead eventually. Where the evidence leads now with regards to Big Bang cosmology, the second law of thermodynamics, and Fine-Tuning is that a supreme being who transcends physical reality brought the universe into existence and fixed its laws so that life could exist.

A second possibility is that Hector Victor is actually conceding that something we would label miraculous actually occurred, but rather than saying it’s a miracle caused by God, he just tries to broaden the scope of what is naturally possible to keep raising dead men (for example) from slipping through the cracks.

So, he may not be saying that there’s an alternative explanation for Jesus’ empty tomb and postmortem appearances. He may actually concede that Jesus truly and genuinely was brought back from the dead. However, maybe this is just a quirk of nature that rarely happens. Maybe there’s a 1 in a quadrillion chance that a dead man’s cells will naturally regenerate. So even though Jesus bodily rose from the dead, God is STILL not needed!

As you can imagine, not many skeptics make this move. I’ve met maybe ONE skeptic who tried this out of my 10 years of doing apologetics. And it’s obvious why so many don’t go this route. It smacks of desperation and is as blatantly ad-hoc of a move as one could make. Anyone who would come to this conclusion is just desperately trying to cling to skepticism which would otherwise dissolve. I don’t think such a claim is one we even need to take seriously.

What I think we do need to take seriously, regardless of which of the two possible interpretation of Hector Aaron’s argument we take, is the claim that we need criteria for filtering out unnecessary appeals to the supernatural. As Christians we recognize that God, angels, fallen angels, demons, exist and do things. But we also recognize that God has a created a universe that runs by regular natural laws. So we don’t want to adopt a methodological naturalism that would exclude us from never ever ever concluding “God did this” or “This is the devil’s work”. But we also don’t want so loose a criteria that anything could be supernaturally explained.2

I wrote about soft methodological naturalism somewhere on this blog, but I couldn’t seem to remember which post it was nor could I find it by looking around. I’ll replicate what I said here in this blog post, therefore.

What I said in the article was that I think there are several criteria an event must meet if it’s to be classified as a genuine miracle. Not all have to be present simultaneously, however, we can way more confidence if all are simultaneously present than if only 2 are.

1* Or at least the event is so extremely rare that only a small number of cases can be found in history.

3: The event happened in a religious environment.

With regards to (1), we need not say that event has to have never occurred again subsequently in the history of the universe. For example, Elijah brought a person back from death in The Old Testament and Jesus brought back Lazarus in the New Testament. And in The New Testament, more than one person was healed from leprosy and blindness. That’s why I added (1*). 1* Would allow miracles like more than one blind man receiving sight. The skeptic might also say that a lot of the biblical miracles wouldn’t qualify for 1* because we have multiple reports from around the world, and even in different religions. But as I point out in my book “My Redeemer Lives” and in my video series defending the resurrection on YouTube, not all miracles are equally attested evidentially. In other words, the historical evidence for each miracle claim needs to be weighed on a case by case basis. I think the evidence is good, for example, that Jesus died and rose again. I do not, however, for others. Skeptics interested should click here to see my comprehensive case for the historicity of Jesus’ Resurrection.

The resurrection of Jesus; the miracle that makes or breaks Christianity, falls into 3.

(1) Never has a man died and been brought back to life in an immortal, imperishable body never to die again. Cases like Lazarus are, at best, resuscitations rather than resurrection. Lazarus rose to die again. Jesus rose to never die again.

(2) If you look at my treatment on naturalistic theories, you’ll know the resurrection meets this one. There’s about a dozen different naturalistic proposals to explain the minimal facts. But they all fail.

(3) The religious context happened after a 3 year ministry of Jesus preaching the kingdom of God, claiming to be God in various ways, and predicting his death, saying that the prophets foretold it. So Jesus’ resurrection has, what William Lane Craig has called a “Religio-Historical Backdrop”.

In conclusion, the problem of “the unknown natural” isn’t really a problem. I think there are clear ways in which we can distinguish a miraculous event from a natural one. This doesn’t mean we’ll be able to neatly and distinctly tell the difference in each and every case. I’m thinking here of modern day miracle claims. Demon Possessions are often hardly distinguishable from mental illness. But we do have criteria that can be met. And in the case of the most important miracle claims (like the resurrection of Jesus) these criteria are definitely met!

2: I do think God can work through natural processes to achieve His ends. I wouldn’t be a very good Evolutionary Creationist or Molinist if I denied that. However, what I’m referring to here are things God does that are truly scientifically inexplicable. Things that would otherwise be impossible if God or some other supernatural agent did not intervene. We are not concerned here with acts of God that theologians would categorize under the label “Ordinary Providence”.

Q and A: Could A Failure To Experience God’s Holy Spirit Justify Unbelief?

Why Didn’t Jesus Appear To Pilate and The Pharisees?