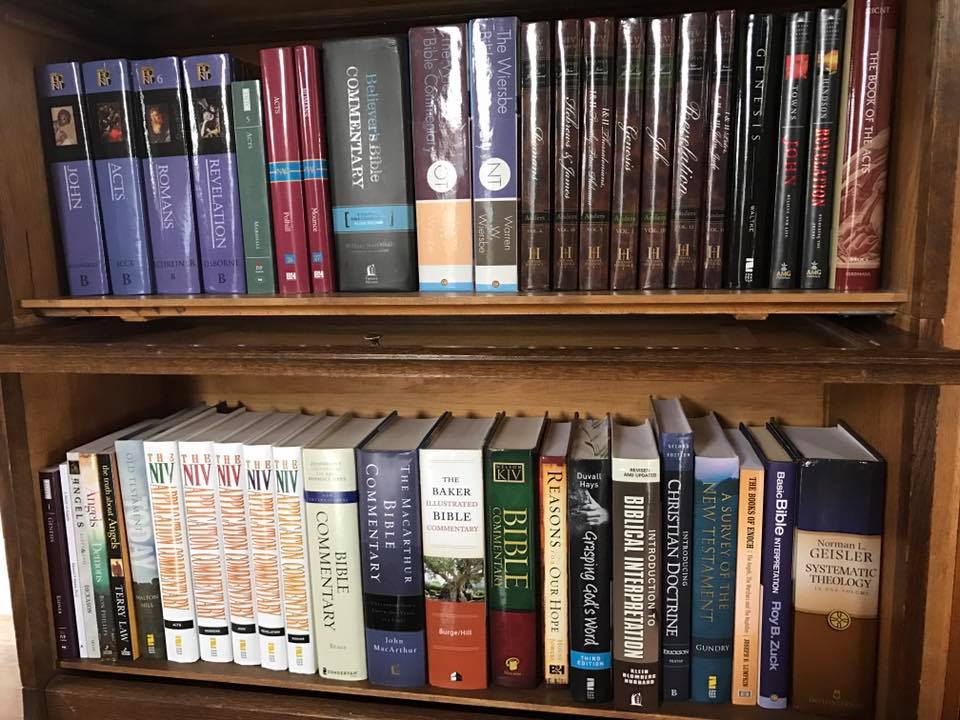 I’ve noticed something of a disturbing trend among fellow Christians. They seem to have a view of biblical interpretation that I like to call “Hermit Hermenuetics” or “Hermitnuetics”. Hermitneutics is the method of reading The Bible in a complete vacuum and avoiding interaction with any scholarly material in the realm of biblical studies. This is the practice of getting an English Bible, sitting somewhere off by yourself, reading it, and doing the best you can to figure out what it says, hoping The Holy Spirit will zap your brain with understanding when He wants you to notice or pick up on something important. Now, I certainly don’t want to knock that. I do believe that The Holy Spirit guides us in our scripture reading by making things “dawn on us” or stick out to us. It certainly has happened to me many times when reading The Bible. However, some Christians seem to think that’s all it means for The Holy Spirit to reveal scriptural truths to you.

“Apparently it doesn’t strike you as at all odd that you had to read so many books and jump through so many hoops, to explain why the creation account in Genesis doesn’t mean what it says. Millions upon millions of people have believed and received God, without knowing anything but what God has told us in His Word. He kept it so simple. So many miracles in the Bible that God performed instantaneously – He spoke and things happened. Interesting that the genealogies go back to Adam and Eve. But you say no, we descended from animals who have no soul. You can’t even see how wrong that is or how calling the first 2 chapters of scripture into question puts the entire bible in doubt – what else doesn’t mean what it says? Most of us missed the memo that we need to read so many extra-biblical books – that were not provided to other believers over hundreds of years – to understand what the bible REALLY means. I don’t buy it.”

I’ve also been told that the reason I read so many apologetics and theology books is that I’m not trusting in the Spirit enough to reveal God’s truth to me. I’ve even been called “A scholar worshipper”!  and have been accused of “Studying the words of men rather than the words of God.” Moreover, just a few hours before I decided to write this blog article, I saw a comment on a post by CrossWay who posted about their ESV “New Believer’s Bible”, a Bible designed for brand spanking new Christians. 1 After describing the various features of The ESV New Believer’s Bible, one person wrote “THERE IS ONLY ONE WAY TO READ AND UNDERSTAND THE BIBLE. THAT THE HOLY SPIRIT.” (all caps in original).

There are several reasons why this line of thinking is just plain wrong.

You can understand much about scripture on your own, but if you limit yourself to an English translation and never go outside of your backyard Bible study, you’ll be missing out on a lot. For one thing, we all hold presuppositions we’d never even known were presuppositions until they were challenged. It never even occurred to me that Jesus’ Olivet Discourse might have been projected (and actually fulfilled!) near the end of the first century until I read Hank Hanegraaf’s “The Apocalypse Code”. I assumed and would continue to assume until this very day if not for being challenged, that Matthew 24-25 was all in our future.2 So I’d look at natural disasters on TV and say “Jesus is a-comin’ any day now!” The same goes for Genesis.

We are told that The Bible teaches certain things from the pulpit, and then when we go to read The Bible on our own, we just naturally see what we’ve been told to see. I would never have even considered partial preterism, much less adopted this view, if I hadn’t had the Left Behind eschatology I grew up in severely challenged by Hank Hanegraaf’s The Apocalypse Code, nor would I have seen The Divine Council in The Old Testament were it not for Michael Heiser’s book The Unseen Realm: Recovering The Supernatural Worldview Of The Bible. Don’t even get me started on the presupposition that Genesis 1 is about material origins. If it were not for John Walton’s books The Lost World Of Genesis One and The Lost World Of Adam and Eve, I never would have in a million years realized that Genesis 1 is about God assigning functions over 7 24 hour days to inaguarate the physical universe as His temple, and that what it meant for God to “rest” on the 7th day wasn’t merely that God stopped creating things (i.e assigning functions), it meant that God took up His dwelling in the universe as His temple, as gods were known to do in the Ancient Near Eastern mindset. Once the temple was physically manufactured, then inaugurated over a 7 day period, the god would come into the temple to take up residence there.

We’re just blinded by our preconceptions. We come to the text with expectations on what it SHOULD say and we find confirmational proof texts that support our preconceptions. Anything that doesn’t fit our system, we just explain away with strained ad hoc explanations of just shrug it off, not knowing what to do with them. We call these “Problem passages”.

Of course, scholars have preconceptions and biases too. I’m not claiming that they don’t. However, reading commentaries and books by biblical scholars who hold to differing interpretations to yours can help you either know that you went wrong in your interpretation, or you’ll be solidified in your confidence in your interpretation. I have certainly had my confidence in Arminianism strengthened by reading poor eisegetical treatments of passages like 2 Peter 3:9 and John 3:16 by Calvinists. On the other hand, my confidence in the eternal torment view of Hell was utterly obliterated by reading Edward Fudge’s book The Fire That Consumes: A Biblical and Historical Study Of The Doctrine Of Final Punishment.

Sometimes, it’s edifying for another Christian to come along and say “Here’s another way to think about that passage.” The Bible says “The one who states his case first seems right, until the other comes and examines him.” (Proverbs 18:17). I would hold to a lot of wrongheaded theological ideas if someone hadn’t come along and examined them. Ideas which, when NOT held under scrutiny, “seem right”.

The Main Things Are The Plain Things and Vice Versa

Are we utterly handicapped and can’t understand anything at all about what The Bible says without reading what the experts have to say? Not at all. That IS intellectual elitism. Indeed, it’s borderline papalist. There’s a lot we can understand about doctrine through just cracking open an English Bible and reading through it carefully. As Christian Apologist Frank Turek often likes to say on The Cross Examined radio program/podcast “The main things are the plain things and the plain things are the main things.” For example, you can know, without any scholarly study at all, that God created everything, He created mankind in His image to be in a relationship with Him, we screwed up, so God became a man and died on the cross to take the punishment we deserve upon Himself, but he later rose from the dead and ascended into Heaven. He will come back again some day to judge everyone, and He will create a new universe to replace this decaying one. You can know that you are a sinner and that Jesus died on the cross to atone for your sins and that if you place your faith in Him, you will not perish, but have eternal life. You can even know that Jesus is God (The prologue to John’s gospel makes that plain enough) yet is distinct in some way from God The Father (again indicated by the words in John’s prologue).

Sometimes It’s Not A Case Of Correcting Interpretation, But Of Digging Deeper

In the case of Genesis 1-2, Psalm 82, and Matthew 24, I probably would still be reading (or misreading) these passages if it were not for Walton, Heiser, and Hanegraaf respectively. However, the scholarship can not only correct MISreadings of the text. Sometimes, it is a matter of seeing additional meaning that wasn’t even plain.

A while back, I read a fantastic exegetical world on The Sermon On The Mount. It’s called The Rabbi On The Mount by Phil Weingart, and it was eye-opening to me to learn how much Jesus’ Jewish background and upbringing illuminated Matthew 5-7. Did I totally misread and misunderstand everything? Am I indebted to Weingart? No. Much of it simply added meaning. Though, some of my interpretations of, say, some of the beatitutdes were shown to be off the mark. You can know what “Love your enemies and pray for those who persecute you” mean without being an expert in Greek or Hebrew.

Like I said near the beginning of this blog post, I don’t want to completely dismiss the idea that The Holy Spirit can make things dawn on you or open your mind to understanding as you’re reading your Bible under a shady tree on a nice summer afternoon. But who said that that is the only way The Holy Spirit reveals things? The Bible certainly doesn’t. In fact, The Bible contains an example in which a Christian came along and interpreted a passage for someone to help them understand it. Acts 8:26-40 records an angel appearing to Philip. The angel told Philip to “rise and go toward the south to the road that goes down from Jerusalem to Gaza”. Phillip did as the angel instructed. Phillip went up to a caravan where an eunich from Etheopia was reading Isaiah 53 aloud. Phillip asked him if he understood what he was reading to which the eunich responded “How can I unless someone explains it to me?” and he then asked Phillip if the prophet was talking about himself or someone else. Phillip took this perfect opportunity to preach the gospel to him. He explained that Jesus fulfilled the prophesy of Isaiah 53. The Holy Spirit used Phillip to help the eunich interpret Isaiah 53. He didn’t zap the eunich’s mind and the eunich suddenly realized “Oh! This passage is about that Nazarene who was crucified in Jerusalem a short while back!”

I do rely on The Holy Spirit to reveal the truths of The Bible to me. Sometimes things just stick out to me or dawn on me while I’m reading. Sometimes it happens during hearing a sermon. Other times, it happens reading commentaries, theology books by people like John Walton, Michael Heiser, Brian Godawa, Norman Geisler, Craig Keener, N.T Wright, or William Lane Craig. Just as The Holy Spirit can use Apologetics and Apologists to convince a non-Christian that The Bible is true, The Holy Spirit can also use scholarship and scholars to help a Christian understand what The Bible means.
Christians who choose not to avail themselves of the best theological works biblical scholars put out there are depriving themselves of great insights.

1: CrossWay wrote “The Bible can be daunting to a new believer. The ESV New Christian’s Bible is a unique, affordable edition created specifically to help young Christians begin to navigate God’s Word for the first time.

***Features***
*4 articles helping new believers understand the core elements of the Bible, how to read the Bible, and help for further study*Introductions to each book of the Bible
*30+ sidebars explaining core Christian beliefs tied to key passages

30-day and one-year reading plans” You can buy it here –>https://www.amazon.com/Holy-Bible-English-Standard-Christians/dp/1433565714/ref=sr_1_1?keywords=ESV+New+Christian%27s+Bible+Hardcover&qid=1570562809&sr=8-1&fbclid=IwAR2JBEPc4Q2t2NatCpPds2VAC4bNCvAmdSz-NbbwKNWhUjXYzklismw4Qso

Things Christians Should Think About During Hard Times

Q&A: How Can We Know Which Doctrines Are True?