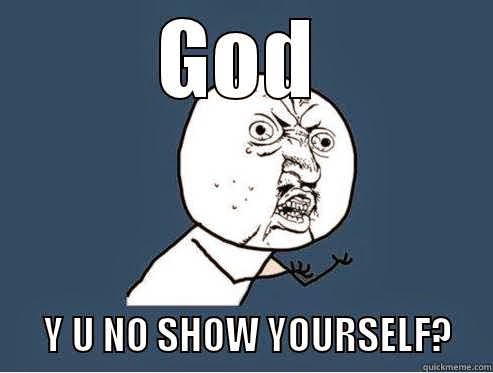 Why is God not more obvious? Why does He not make it undeniable that He exists if He wants everyone to believe that He exists so that they don’t go to Hell when they die for the sins that they have committed in this life? This is a good point and it’s one of the more potent arguments for atheism along with the problem of evil and suffering. I do believe God wants everyone to believe that He exists. The Bible states on multiple occasions that He loves all people and wants all people to be saved from their sins (see 2 Peter 3:9, 1 Timothy 2:4, 2 Corinthians 5:15, John 3:16, and 1 Timothy 4:10) and that’s why He suffered a horrible death on the cross in order to be the substitute for everyone (2 Corinthians 5:15). God must punish sin and we’ve all sinned (see Psalm 14:2-4 and Romans 3:23). God does not want to punish us though because He loves us all in the same way a father loves his children. He doesn’t want to send us to Hell but He knows that if He doesn’t, then He isn’t just because He wouldn’t be punishing evil deeds. That’s why God became a human being Himself, incarnate in the person of Jesus Christ, in order to take our punishment for us on the cross. Jesus suffered the agonies of Hell on that cross so that we wouldn’t have to. All we have to do is repent of our evil and immoral ways and confess our sins to Jesus and He will forgive us and He will be registered as our substitute. Given that God wants none of the wicked to perish, why then does He stay hidden? We certainly need to believe THAT God exists in order to be saved (see Hebrews 11:6) although I’ve said in my conversation with unbelievers in the past, belief in His mere existence is not all that’s required for salvation since even Satan believes God exists and he’s not going to Heaven (see James 2:19), but belief in God’s existence is certainly ONE requirement for being saved from our sins. The other requirements would be repentance (Isaiah 55:7, Joel 2:12-13, Ezekiel 18) and confession (1 John 1:9). Satan has the former, but not the latter. Christians have both the former and the latter.

But the point is; why does God seem hidden if He wants everyone to be saved. If believing in His existence is one of the requirements for being saved, then why is He invisible? Why doesn’t He talk to people in a loud booming voice from the sky like He did with the prophets and like he did with Adam and Eve in the book of Genesis? Why doesn’t God put a huge floating neon cross in the sky that says “Jesus Saves” or why doesn’t He appear to people in the same manner St. Faustina claimed Jesus did to her (a phenomenon known as a “theophany”)?

Some Christians would say that if God made Himself so obvious, that that would take away our freedom to choose to receive Him or reject Him. Christian Philosopher J.P Moreland appears to hold this view. J.P Moreland said “God maintains a delicate balance between keeping His existence sufficiently evident so that people will know He’s there and yet hiding His presence enough so that people who want to choose to ignore Him can. This way, their choice of destiny is really free.”

C.S Lewis also appeared to hold this view. When writing the Screwtape letters, he had the senior demon Screwtape say to his nephew Wormwood:

“You must have often wondered why the Enemy does not make more use of His power to be sensibly present to human souls in any degree He chooses and at any moment. But you now see that the Irresistible and the Indisputable are the two weapons which the very nature of His scheme forbids Him to use. Merely to override a human will (as His felt presence in any but the faintest and most mitigated degree would certainly do) would be for Him useless. He cannot ravish. He can only woo. For His ignoble idea is to eat the cake and have it; the creatures are to be one with Him, but yet themselves; merely to cancel them, or assimilate them, will not serve.”

In other words, they could not “suppress the truth in their unrighteousness” as Romans 1:18 says if they had undeniable proof of God’s existence. God makes His existence plain throughout everything He’s created (as I’ll say more on in a moment) but not so plain that people can’t talk themselves out of believing that God exists. Their points are that God makes the evidence for His existence so powerful that men have no excuse in denying His existence (Romans 1:20) but not so powerful that they can’t talk themselves out of believing in Him (Romans 1:18).

I’m not sure if I agree with J.P Moreland and C.S Lewis. I think that even if God made Himself so obvious that no one could possibly ever deny His existence, people would still reject Him. I mean, look, Satan did as well as 1 third of all the angels. They knew for a fact that God existed. They knew with an even greater certainty that I do that God exists and yet they STILL defied him!

Pharoah, in the book of Exodus, had overwhelming evidence but still wouldn’t let the Israelites go until he lost his son, but even then he changed his mind after Moses, Aaron and the Israelites were on their way to the Red Sea. Pharaoh and his army chased them down. Then they saw more of God’s awesome power. God parted the Red Sea and allowed the Israelites to cross. At that point, it really should have been obvious to anyone that not only did the God of Israel exist, but that He was on the Israelite’s side and that He was way more powerful than the Egyptians.

Then we have the Pharisees. The Pharisees saw all of the supernatural acts that Jesus had done. They saw the messianic prophesies that Jesus had fulfilled. They had overwhelming evidence that Jesus was the messiah, and yet they suppressed the truth in their unrighteousness (Romans 1:18) so greatly, that they declared that Jesus’ power came from the devil! Now, they could not possibly deny the nature of Jesus’ deeds, they were clearly supernatural. So they knew that supernatural acts could only come from 2 sources: either they came from God, or the devil. Well, if they admitted that His deeds were from God then they had to accept His claims to deity and His claims to be the messiah, which they did not want to do. So instead they accused Him of being in cahoots with Satan! After this, Jesus gave them a very logical refutation to their accusation. Jesus said that it would be absurd for Him to be casting out demons by the power of another demon because that would mean that Satan would be fighting against his own army. It would be like a general in an army telling one of his soldiers to go start shooting other soldiers who were in the same army as he was. He said it was illogical for Satan to cast out Satan. Therefore, it’s logical to conclude that Jesus casts out demons by the finger of God (i.e The Holy Spirit). So you can clearly see how adamant they were in resisting God’s grace, even in the face of powerful, overwhelming evidence!

God gives us evidence that is so sufficient that there’s no need to put, as Bill Craig says “put a neon cross in the sky that says ‘Jesus Saves'”. Romans 1:20 says that the evidence for God’s handiwork in nature is so powerful that people are without excuse in not believing that He exists. Not only is it obvious on the intuitive level, but when you delve into the scientific evidence put forth by the Intelligent Design community and Reasons To Believe, the evidence just becomes extremely powerful. Science studies the natural world. The Bible says that if God exists, we can know He exists by observing “everything that has been made”, so we shouldn’t be surprised if science uncovers strong evidence for design. I find the scientific evidence for God’s handiwork in nature to be very powerful, particularly The Big Bang theory (coupled with the reasoning ofThe Kalam Cosmological Argument) and The Fine Tuning Arguments (both universal and local), but even the evidence for design in biology such as DNA and irreducibly complex machines within every cell of every living organism on the planet. There’s also good historical evidence for Christ’s resurrection.

You don’t need to see the painter to know that he exists, you can infer his existence from the painting.

Also, there was a guy in the New Testament who asked Jesus to perform more signs to vindicate Himself. Jesus told him that no sign would be given to Him except the sign of Jonah (metaphorically referring to His resurrection). In other words, Jesus was saying that He had given them more than enough evidence to confirm His messianic identity. If they didn’t believe at that point, MORE evidence wasn’t going to convince them. Jesus said that He would only offer one more piece of evidence to vindicate His claims and that would be His resurrection from the dead. So there is a point I think, when God stops providing evidence once it becomes unnecessary because the evidence He’s already provided is more than sufficient to warrant a conclusion.

Although if God appeared to everyone in a theophany, it certainly would get some of the people to change their minds and become Christians, just think of the apostle Paul for example, who stopped persecuting Christians and became one of them when the risen Jesus appeared to Him on the road to Damascus (see Acts 9:1-19) as well as Jesus’ brother James (1 Corinthians 15:7), but nevertheless, I still think that there would be many people who resisted God in spite of having absolute proof of His existence, just like Satan, all of the demons who rebelled with Satan, Pharaoh, and the Pharisees.

If you’re an atheist, you need to ask yourself “would I be one of those people who would reject God even if he appeared to me?” If your answer to that question is “yes” than that probably explains why God hasn’t done it. What I’m asking you is, “if you knew for certain that Christianity were true, would you become a Christian?” Well, would you? Would you bow your knee to the One who loves you more than any human being ever could? Who was beaten, tortured and killed so that He could spend all eternity with you? If the answer is no, then it would serve no good for Christ to appear to you. Moreover, if you are hardened like the Pharisees in that you desire not to believe that Christianity is true, if Jesus appeared to you in a theophany, you might well dismiss it as a hallucination or a dream.

I can’t know your heart, only God can know what’s in your heart (see 1 Samuel 16:7, Deuteronomy 31:21, Psalm 44:21, Psalm 139:2, Proverbs 15:11). You might be a sincere seeker, a person who wants to know truly if Christianity is true or not. But there are people who talk themselves out of believing it because they don’t want to believe it (I addressed this in “Are All Reasons For Rejecting God Purely Intellectual”), but I can’t know if you’re one of those people or not.

How An Atheist Helped Me Overcome The Divine Hiddenness Objection

Why Isn’t There Divine Obviousness For The Spiritual Seeker?