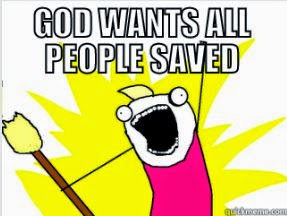 We Arminians and Molinists, in arguing for universal atonement (also known as unlimited atonement) will often times appeal to various scriptures which, on their face, appear to mean that God both loves, died for, and desires every human being who would ever live to be saved and to come into an eternal relationship with Himself.

Such scriptures would be Like 1 John 2:2, which says “[Jesus] is the atoning sacrifice for our sins, and not only for ours but also for the sins of the whole world.” (1 John 2:2 NIV)

Jesus said “For God so loved the world that he gave his one and only Son, that whosoever believes in him shall not perish but have eternal life. For God did not send his Son into the world to condemn the world, but to save the world through him. Whoever believes in him is not condemned, but whoever does not believe stands condemned already because he has not believed in the name of God’s one and only Son.” – (John 3:16-18 NIV)

So, Jesus died for “the world”. 2 Peter 3:9 says God is “not willing that any should perish, but that all should come to repentance” and 1 Timothy 2:4 says God “…desires all people to be saved and to come to the knowledge of the truth.” While these two verses don’t say that Jesus died for all people, it does say that God wants all people saved. And if God desires all to be saved, then it stands to reason that Jesus would have died for all so that they could be saved (even though many would be lost because they freely chose not to repent). In fact, just two verses after 1 Timothy 2:4, Paul says that Jesus “gave himself as a ransom for all”– 1 Timothy 2:6

You also have Hebrews 2:9 which says that Jesus “tasted death for everyone.”

Seems like The Bible affirms universal atonement and a universal salvic will of God right? Well, not according to Calvinists. According to Calvinists, these texts only mean that God wants “All kinds” of people saved. Other Calvinists interpret these “all” texts as meaning “all of the elect”. But is this really a plausible interpretation? I don’t think so. In fact, if you took these two interpretations of “all” and applied them to other scriptures, you come to some odd conclusions. Let me show you some examples.

All Kinds Of Scripture Is God Breathed

2 Timothy 3:16 says “All Scripture is God-breathed and is useful for teaching, rebuking, correcting and training in righteousness”

“You know, it occurs to me sometimes that if Calvinists were consistent in their interpretation of “all”, then one couldn’t legitimately used this verse to support innerency and inspiration. One can say “All” means all spiritual doctrine instead of scientific or historical facts. Maybe “All” here just means all of the passages meant for teaching us how to live the good Christian life, whereas other parts of scripture aren’t breathed by God and “useful for teaching, instructing, etc.” whatsoever.  So even someone who disavows biblical innerency and even biblical inspiration could hold that this verse is true.

All Kinds Of People Will Be Judged Before God

Interestingly, the “all kinds” hermeneutic seems to undermine the doctrine of the final judgment, as well. How can we possibly establish that God will judge all people? Especially given the fact how, in Revelation, all races, tongues and kindreds etc. are standing before the throne of God. There, kinds are not dichotomous with every person.

Every Kind Of Knee Shall Bow

Philippians 2:10 says “Every knee shall bow, and every tongue confess that Jesus Christ is Lord.” I used to think, like many people, that this means that every one will intellectually acknowledge God’s sovereignty and power. Those who denied His existence, those who railed against Him and spat in His face, and who exalted their own wills against His will someday bow to Him in reverence when His second coming occurs. No one will say any longer “God does not exist” or “Jesus is dead”. They will be professing just the opposite. Well, thanks to Calvinist theologians, I now know that “all” doesn’t always mean “all” and “every” doesn’t always mean “every”. This could mean that “Every kind” of knee will bow and “all kinds” of tongue will confess that Jesus Christ is Lord. There may be some or even many people who do not bow or confess Jesus’ Lordship. Thanks, Calvinists theologians. If it weren’t for you, I might have gone my whole life thinking that this verse meant every person without exception.

Jesus Created All Kinds Of Things

John 1, which is the most obvious and glaring statement affirming the deity of Jesus Christ and affirms that He is the Creator, is also undermined by the Calvinist interpretation of the greek word “pas” which is used in 2 Peter 3:9, 1 Timothy 2:4, the other “God wants all people saved” passaged, and also 2 Timothy 3:16 (“All (pas) scripture is God breathed…” Pas is also used in this passage.

So, if all (pas) doesn’t really mean all without exception, then we can conclude that there are some things the divine Word didn’t create. Perhaps when it says Jesus created “All” (pas) things, it just means that Jesus created a few trees and a few planets here and there, but that a lot of things weren’t made by Jesus. It seems that if Calvinists were consistent in their interpretation of pas/all, that would undermine the doctrine of creation! There are some things that exist that God did not create!

Obviously, if we interpret “All” in the way that Calvinists want us to, we’re led to all kinds of odd conclusions (see what I did there?). There are several more passages I could cite to make my point, but I think my point has already been made. Moreover, I think it’s obvious that if Paul and Peter wanted his readers to understand that God wanted all kinds/types of people saved or if he only wants “All of the elect” to be saved, they could easily have done so. Why doesn’t Peter say “The Lord….is not willing that any of the elect shall perish, but that all of the elect come to repentance” if that is what he truly meant? Or…why didn’t Paul say something like “This is good and pleases God our Savior who wants all types of men to be saved and to come to the knowledge of the truth”. Surely, it would have been much easier to communicate God’s narrow salvic will.

It seems that the plain teachings of scripture is that God wants every human being who will ever exist to come into a saving relationship with Him. This, to me, really magnifies the greatness of God and the passion of His love. It means that as you watch The Passion Of The Christ, you know that God did that for all mankind, no matter how evil or desperately wicked they may be. Christ considered them so precious that He was willing to endure Hell on their behalf so that they wouldn’t have to. I try to think of the most wicked person who’s ever lived (e.g Hitler) and think “Christ died for him!?!? What love is this? How deep and overflowing is the love of our God that He should consider even the worst of scum to be as valuable as gold! That he should want to take even the most hellish individual, take him in His arms and call him ‘my child’! How great thou art!”

Not Willing That Any Should Perish

Who Does God Want to be Saved?