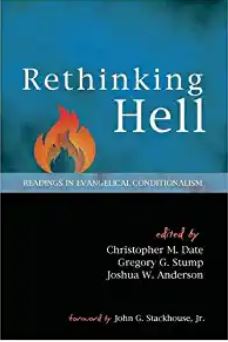 Rethinking Hell is a fantastic work. This book is a collection of essays and other writings by a variety of different Evangelical authors who promote a view known as Annihilationism or conditionalism. The editors are Chris Date, Greg Stump, and Joshua Anderson. Part 1 of the book contains two chapters interviewing the subject of evangelical conditionalism. Parts 2 and 3 involve giving a biblical and exegetical conditionalism. Part 4 involves philosophical objections against conditionalism as well as philosophical objections for it. Finally, in part 5, we have a section on church history. I find the case for the annihilationist position to be overwhelmingly powerful. I was already convinced after reading Edward Fudge’s “The Fire That Consumes” which I wrote a review of here. However, if I had started with Rethinking Hell instead of The Fire That Consumes, this book would have convinced me to give up the traditional view of Hell. The case is that powerful.

Now, given that this is a collection of book chapters, academic papers, blog posts, journal articles, et. al each chapter is stand alone from the rest of the book. As a result, there is a lot of overlap in the exegetical portions, and you’ll see the same points pop up over and over. For me, this is actually a plus, since I learn best by repetition. I do have a tendency to read the same book more than once. That said, I do think others might find this annoying, so whether this is a pro or a con will depend on whether or not you’re like me and need to have something repeatedly pounded into your head for it to stick. I agree with one Good Reads reviewer who said of this repetitiveness that “Some may find this difficult to wade through, but perhaps a better way to see it as thorough and exhaustive. Almost every text is examined and every argument at least considered. This repetition illustrates the consistency of annihilationist exegesis.”

I shall now summarize why conditionalists think theirs is the correct biblical interpretation. Glenn A. People’s essay, “Introduction to Evangelical Conditionalism,” outlines its “principle arguments” under four headings:

Arguments 1, 3, and 4 recur throughout the Rethinking Hell book. If you’re an atheist or other non-Christian who just can’t seem to wrap his mind around how a God who subjects people to an eternity of agony could possibly resemble what we call good, or if you’re a Christian who is earnestly wanting to know what The Bible really teaches about the fate the damned, you will want to get this book. I wish someone had given me this book when I was struggling with this justice of Hell.