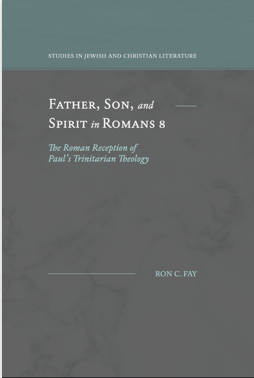 This is a pretty good book on Paul’s view of the Trinity. Fay’s aim is to see how the recipients of the epistle titled in our English Bibles as “Romans” would have understood Paul’s doctrine of God. Many of them were converts out of paganism after all. How would they have grasped the concept of The Trinity? Fay begins his thesis by surveying the religious beliefs of the Romans in Roman Mythology (chapter 1). Fay’s point here isn’t that Paul steals ideas from pagan religions and incorporates them into his teaching, but rather that Paul worded his epistle in such a way that those who previously worshipped in Greco-Roman religions and worshipped Greco-Roman gods would understand. In other words, Paul accomodated His message to His Roman audience, speaking in terms they would understand. I like to think of it like this; what if you were to travel back in time and try to explain the concept of a car to someone in the 1700s. You might say something like “You know carriages, right? Well, in my time, we have carriages that are motorized. There’s a complex contraption that utilizes a special liquid to power it. You would use “Horseless Carriage” or “Motorized Carriage” instead of the terms you’d usually use like “Car” or “Truck” or “Automobile”, which would be meaningless to them. Fay argues that Paul used terminology and concepts that would have resonated with the Roman Christians. All the while, he would be working with his own Jewish idea of God which Paul would have never abandoned, but would have integrated his new view of Jesus with.

After that, Fay goes on to commentate on pretty much everything in the chapter. Ron C. Fay talks about God and creation, and God and Law, and God and adoption, and so on and so forth. I found the part about adoption to be very interesting. Fay talks about the Roman process of adoption, the various reasons why anyone in the Roman world would adopt someone, and so on. We’re kind of in the dark about Jewish views of adoption . We know more about Roman views of adoption. But considering that Romans were who Paul was largely writing to, it seems to me right that the Roman views and ideas about adoption is what’s most important anyway.

Fay then goes on to unpack all of what he just said in the aforementioned abstract.

I have two complaints though; one is an objective feature of the book and the other is subjective. First, this book is a scholarly book and there are many Greek words and phrases that are not transliterated. I wish Fay had done this because I myself am someone who cannot read Greek. It would have been a better experience for me if the Greek verses and passages and terms were transliterated into the ABCs I know of. He could have still rendered it in the original Greek alphabet for his scholarly audience while simultaneously transliterating it for those who are interested in the subject matter but who would just see a bunch of scribbles. An ignorance of Greek is not an insermountable barrier to learning from this book though, as you can sometimes infer what Greek word he’s using if you’re familiar with Romans 8 and what it says in English and if you’ve looked up the transliterated Greek word in your own lexicons and concordences. But do be warned that the author assumes you can read Greek.

Another reason is that parts of it were dry reading. I don’t know why it felt like that. I am used to reading academic books. In fact, I read “Philosophical and Theological Essays On The Trinity” immediately preceding this book, and I found that book quite stimulating. I’m only bringing this up because I want to explain why it has a 3 star rating instead of 4. The lack of transliteration and the dryness of presentation are the reasons. But the latter is probably peculiar to me because whether an essay (or parts of an essay) is dry or stimulating will differ from person to person.

I want to thank Fontes Press for sending me a copy in exchange for a review, and for accomodating my learning disability by sending me the EPUB edition so I could convert it into an MP3 and listen while my eyes followed along with the words.

BOOK REVIEW: “The Kalam Cosmological Argument, Volume 2: Scientific Evidence For The Beginning Of The Universe”

What Would Aliens Mean For The Christian Worldview?