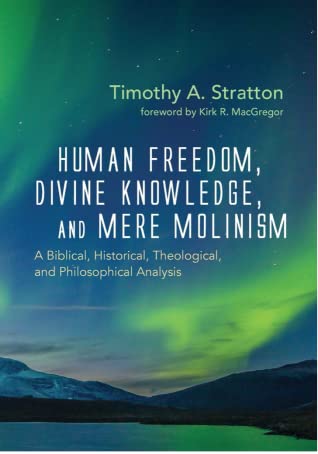 MAGNUM OPUS! Those are two words that come to mind when I think of the dissertation written by Dr. Tim Stratton. In this book, which is his dissertation, Tim Stratton defends the theologic systematic called Molinism. He begins by noting that divine determinism and libertarian free will have much scriptural support, thus a charitable person can understand why some might embrace either Exhaustive Divine Determinism or believe that God has granted libertarian free will. There are biblical passages that seem to teach both.

After surveying the biblical foundations for the divine soverignty/free-will debate, Stratton moves on to look at how Christian thinkers have typically dealt with this issue, how they reasoned about it, and what conclusions they drew. Astonishingly, apart from St. Augustine near the end of his life and Jonathan Edwards, most of the prominent historical theologians (e.g Augustine earlier in life, Thomas Aquinas, Jacobus Arminius, and even Martin Luther and John Calvin) held that human beings have liberarian free will (i.e the ability to choose between a range of alternatives each of which is compatible with one’s own nature). Not all of these theologians believed that humans had freedom in soteriological issues (i.e the ability to choose to respond to the gospel of reject the gospel), but they did believe human beings had genuine libertarian freedom when it came to non-soteriological matters. For example, John Calvin would say that while I didn’t have the freedom to accept or reject Christ, I do have the freedom to choose whether the next Bible I read is The NIV Cultural Background Study Bible or The Apologetics Study Bible or even a regular Bible. And likewise Luther would say that while non-Christians cannot choose to receive the gospel unless “effectually called” by God’s irresistible grace, and Christians by contrast cannot choose to spurn God’s grace, non-Christians can choose between a variety of other things. For example, an atheist could choose whether to watch The Simpsons, Family Guy, or not watch TV at all and read a book instead.

I would (and Stratton does as well) disagree that we don’t have freedom in soteriological issues. We affirm with Arminius that God has granted people “prevenient grace” to enable people to respond positively or negatively to the gospel, but the point is that applying universalism across the board, according to Tim Stratton’s historical theological survey, really didn’t seem to gain traction even in Calvinist circles until Jonathan Edwards.

I found this surprising as I had previously thought Calvin and Luther were exhaustive determinists, and I’m sure it will come as a surprise to many others. Again, they didn’t believe we had the ability to choose or reject God, but they believed we could choose between lots of things not related to salvation.

The historical-theological survey of Christian thought that Stratton surveys goes in the chronological order of three periods; pre-reformaton, reformation, and post-reformation. He starts with Augustine and ends with Edwards.

After surveying the way that Christian theologians through church history have handled the divine soverignty/human ree will debate, which covers chapters 3-11, Dr. Stratton spends two chapters arguing that human beings do possess libertarian free will.

The “core” of The FreeThinking Argument, which shows up in all versions, is this:

In this chapter, Dr. Stratton gives arguments and good reasons to believe all of the premises are true. Thus, even apart from biblical considerations, one can deductively conclude that human beings are genuinely free agents who are the source of their own actions and can choose between a range of options compatible with their nature at least some or maybe even most of the time.

But of course, there are biblical arguments for libertarian free will as well. This is the subject of chapter 13 of the book. Stratton already unpacked some of this in chapter 2 titled “Biblical Foundations” but he goes into more detail in chapter 13.

The Apostle Paul makes many claims suggesting that his audience possesses this type of freedom. For example, Galatians 5:13 (NLT): “For you have been called to live in freedom, my brothers and sisters. But don’t use your freedom to satisfy your sinful nature. Instead, use your freedom to serve one another in love.”

Stratton cites Burton’s classical commentary on Galatians, and in that commentary, Burton highlights the “voluntary” choice of using human freedom wisely in a sort of “slavery” shown by loving actions/decisions in relationships especially among believers: “To men who have been accustomed to think of law as the only obstacle to free self-indulgence . . . such language is . . . easily taken to mean that for the Christian there is nothing to stand in the way of the unrestrained indulgence of his own impulses . . . The thought is . . . convert not this freedom into . . . Having urgently dissuaded the Galatians who were formerly enslaved to gods that are not really gods . . . [he] bids them serve one another, yet clearly not in the sense of subjection to the will, but of voluntary devotion to the welfare, of one another . . . The present tense of δουλεύετε [serve] reflects the fact that what Paul enjoins is not a single act of service, nor an entrance into service, but a continuous attitude and activity.”

Dr. Stratton writes that“Paul is clear that those to whom he is writing possess the freedom—an ability—to choose among a range of options each of which is compatible with their sinful natures, namely, a choice to satisfy selfish desires, or to serve others in love.

Another example is 1 Corinthians 10:13, the apostle Paul wrote: “No temptation has overtaken you, except what is common to man. And God is faithful. He will not allow you to be tempted beyond your ability, but with the temptation, will provide a way of escape also so that you will be able to endure it.” This is probably the most powerful evidence of libertarian free will in the entire Bible. Paul says that the temptation that afflicts his readers isn’t anything unusual. He then goes on to say that God is faithful, and won’t allow the temptation to sin to be so overwhelming that it’s impossible for them to resist it. Instead, God will provide “a way of escape” so that they’ll endure it and ergo avoid sinning.

Paul is assuming here that his readers don’t have to sin. Sin is not inevitable. God provides a way out so that we’ll be able to avoid sin. If we do sin, it’s because we refused to take “the way of escape” that God offered. If we don’t sin, it’s because we chose “the way of escape”. This verse presupposes libertarian free will. It presupposes that the listener does not have to sin. He’s faced with A (sin) and Non-A (The Way Of Escape). He can choose either and is responsible for whichever one he chooses.

At least Christians have libertarian freedom to sin or not sin. But of course, whether unbelievers can or not cannot be drawn from this verse. One would need to look at additional passages of scripture and/or philosophical arguments to get that conclusion. But this verse does disprove Exhaustive Divine Determinism (EDD), i.e determinism across the board. Christians are free in a libertarian sense because neither sin nor the way of escape are inevitable.

There are many other examples that I won’t go into. Get the book to read about them yourself!

After laying the biblical foundations for God being in control of all thinks in Chapter 2, and having established that human beings are responsible for at least some things in Chapters 2, 12, and 13, Stratton goes on to argue that he thinks Molinism is the best way to systematize the biblical and philosophical data.

And I wholeheartedly agree with him. To explain Molinism, I often start with the three logical moments of God’s knowledge. Let’s take the crucifixion of Jesus as an example. The Bible says “This man [Jesus] was handed over to you by God’s deliberate plan and foreknowledge; and you, with the help of wicked men, put him to death by nailing him to the cross.” (Acts 2:23, emphasis mine). The crucifixion of Jesus was deliberately planned by God, His foreknowledge played a role in the matter, but it was wicked men who put Jesus to the cross. Molinists say that God knew that if Caiaphas was high priest in the first century, then he would freely condemn Jesus on grounds of blasphemy and he would freely take Him to Pilate for execution. He knew that if Pilate was perfect in the first century, then he would freely comply with the demands of the crowd. And God knew that if Judas was born in the time and place that he actually was, then he would become Jesus’ disciple for a while and would freely choose to betray Jesus to the Sanhedrin. God knew how all of these people would behave if He placed them in the time and places He did. God decreed the whole thing, but the libertarian freedom of the actors remained completely intact.

Thus, unlike divine determinists, simple foreknowledge Arminianism, and open theism (which are all plagued with numerous issues), Molinism can best account for the whole of what scripture teaches regarding the sovereignty of God and the freedom and moral accountability of human beings.

My overall assessment is this; this is perhaps the greatest book on Molinism ever written. It’s heavily researched (as all dissertations should be), Dr. Stratton quotes the words of the people he disagree with so you can be confident that he is not misrepresenting what they believe, and the arguments for libertarian free will both from philosophy and scripture are powerful. Moreover, this book covers a wide array of topics; logic, how to properly exegete scripture, what The Bible says about God’s sovereignty and what The Bible says about human free will, it covers church history and how theologians through the ages have wrestled with the face value tension of God being sovereign and man being free, it covers philosophical arguments for and against free will, biblical arguments for and against free will, and it ends with how Molinism can help bolster some arguments in Christian Apologetics! That final chapter is called “The Apologetic Significance Of Molinism”.

Finally, I found myself quite surprised at how easily accessible this book is! For a dissertation, it is surprisingly easy to understand, especially for such deep subjects! Most books or blog posts I have read on Molinism have been kind of heady, even though they were pop level stuff! When I first picked up this book, I was expecting loads of scholar babble. That was not the case. I’m hoping that this is not due to my familiarity with the subject matter. There is a tendency for me to think “If an average guy like me can grasp this stuff, other people ought to be able to as well.” In other words, hopefully the book really IS easily accessable and it’s not just that I have high reading comprehension (I have graduated from pop-level books after all).

But possible cognitive blindspot aside, I would recommend this book to both scholar and layperson alike!

BOOK REVIEW: “How (Not) To Read The Bible” by Dan Kimball