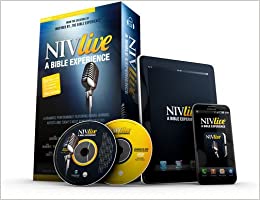 The title of this blog post says “Book Review (Sort Of)…” because what I’m going to be reviewing isn’t technically a book. It’s an App. NIV Live is an App you can download from the Google Play Store, and when you open it, you have the entire text of the 66 books of The Bible in the New International Version translation. The app is mostly free. You can get all of the text of scripture for no cost, but if you’d like the audio, you’ll have to pay a measily 4 bucks to get it. If you read and listen at the same time, it’s sort of the equivalent of reading a Kindle book with WhysperSync on. For those who don’t know, WhisperSync is when Amazon links your Kindle e-book and Audible audiobook and you can listen and read at the same time, with the text being read in the audiobook being highlighted in the Kindle App.

This is probably the the best dramatized version of The Bible that I’ve listened to. The acting is fantastic, and the mood music and sound effects in addition to the acting makes it feel really cinematic. I suppose this is because many professional actors were chosen to voice the biblical characters, though obviously not all of them are professionals as you can tell from the prescription above. The guy who read the epistle of Jude sounded just like New Testament scholar Ben Witherington III! Since Pastor Craig Groeshell voiced Amos, it isn’t too out of the question to think that that very well could be him!

I only just started using the app. I listened from Genesis to Isaiah on CD, and I listened (and read) from Isaiah to Revelation on the smartphone app. I haven’t had that much problem with the app to be honest. There were a couple of chapters where the verse highlighter jumped ahead and it went to the next chapter before the audio was finished reading. But this has only happened a couple of times. I was hoping that would be an uncommon occurrence and having read/listened to all of the New Testament and a portion of The Old Testament, I think it was. Though since I listened to Genesis-Isaiah on CD, I can’t comment concerning that part. It has only happened maybe 3 or 4 times. I’ve read the negative reviews of the app on The Google Playstore, and frankly, I haven’t experienced ANY of the problems some of these reviewers have mentioned, so I can only assume these once-existent issues have been patched. Either that, or the issues were only on the iPhone version of the app and not the android version. My smartphone is an android.

Sometimes I would read and listen at the same time, other times I would just listen, such as when I was up doing housechores or on the road.

I think this is fantastic audiobible overall and the app is really great. It’s a great way to do immersion reading with God’s word and to listen to God’s word on the go. One of my critiques with the app is that when I turned my phone’s screen off, it wouldn’t automatically download the next chapter. I would have to take my phone out of my pocket, open my phone, and download the next chapter manually. The next chapter would only download if the screen was left on. This wasn’t too bad, but (1) having the screen on constantly drains the battery faster, and (2) I’m more prone to accidentally touch something to either skip a verse, skip a chapter, or exit the app. Either when bending over while doing house work or when simply putting my phone in and out of my pocket. This isn’t a super big deal, but if you’re looking to just listen to the audio and not read along while you’re up doing other things, that can be annoying.

Another point of criticism (again, not a big deal) is that the deep voiced narrator mispronounced some names, particularly in the Old Testament. But again, it’s not that big of a deal.

1: From the description on Amazon.com.