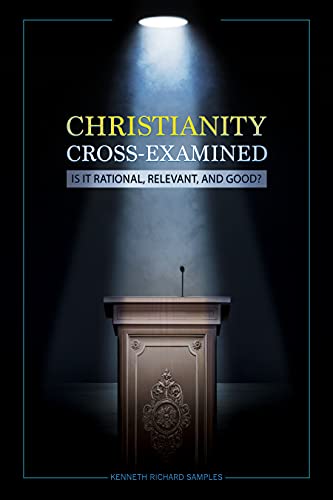 Ken Samples’ “Christianity Cross Examined” is a really good book. The task of Samples is to show that Christianity is not only true and rational to believe, but also that it’s relevant to us today and is good. The book is divided up into two halves to make those points accordingly. Part 1 deals with the rationality of Christian belief. Samples starts off with the common claim of atheists that science has made God necessary. He shows that this isn’t true in a number of ways.

First, in chapters 1 and 2, he points out that when science really got off the ground in 17th century Europe, it was actually the presupposition that God created the universe and maintained it that made science possible. As C.S Lewis put it, “People became scientific because they expected law in nature, and they expected law in nature because they believed in a law maker.” And accordingly many of history’s great scientists such as Isaac Newton and Michael Faraday were believers in God generally and believers in Jesus more specifically. He also shows that science hasn’t made God unnecessary by looking at what scientific discoveries over the past centuries have shown us. Science has shown us that the universe began to exist out of nothing about 14 billion years ago in a rapid explosion like expansion Fred Hoyle dubbed “The Big Bang”. He goes into two arguments for God’s existence that can take advantage of this discovery: The Kalam Cosmological Argument and The Contingency Argument. The beginning of the universe and the contingency of the universe point to a spaceless, timeless, uncaused, immaterial, powerful Being who caused the universe to come into being.

He also talks about The Fine-Tuning of the universe and how this points to an Intelligent Designer of the cosmos.

From there, he goes on in chapter 3 to address the relationship of faith and reason. In chapter 4, he addresses the common question “If God made the universe, who made God?” And he then moves on to talk about the logical coherence of The Trinity and the Incarnation. He ends part 1 of his book with a treatment of the historical case for the resurrection of Jesus.

In Part 2, he deals with objections from atheists that God is evil because of how The Old Testament portrays Him, and whether religion has had negative or positive effects on society historically. The issue of The Canaanite Conquest and Old Testament regulations about slavery were dealt with masterfully in this part of the book, and even the issue of the division between church denominations and the problem of UnChristlike Christians was dealt with well.

Ultimately, Samples didn’t go as deep as he could have in any of the areas he touched upon, but such is understandable as he was trying to cover a lot of ground, and entire books have dedicated to the subject of each of the chapters. As an introductory book to Christian Apologetics, this is an good book.

Disclaimer: I received a free copy of this book from Reasons To Believe in exchange for a review.

BOOK REVIEW: “How (Not) To Read The Bible” by Dan Kimball