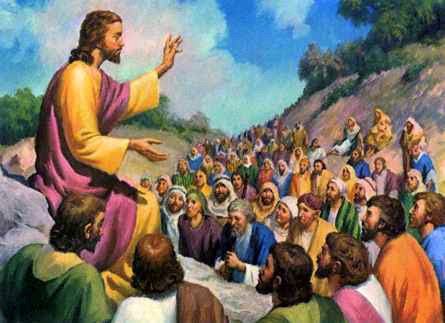 In the sermon on the mount, Jesus said “You have heard that it was said, ‘Eye for eye, and tooth for tooth.’ But I tell you, Do not resist an evil person. If someone strikes you on the right cheek, turn to him the other also. And if someone wants to sue you and take your tunic, let him have your cloak as well. If someone forces you to go one mile, go with him two miles. Give to the one who asks you, and do not turn away from the one who wants to borrow from you. You have heard that it was said, ‘Love your neighbor and hate your enemy.’ But I tell you: Love your enemies and pray for those who persecute you.” – Matthew 5:38-44

But isn’t this a contradiction? In Leviticus, we have God saying to Moses that if one man causes another man injury, then the man who was done wrong should do the same thing to him. But Jesus said in the sermon on the mount that if someone strikes you on the left cheek turn to him the other one also. Jesus even quoted this very passage in Leviticus before saying that. Is this a legitimate contradiction?

I don’t think it is. You see, the wider context of the Leviticus passage reveals that this passage was not about revenge at all, but about judicial punishment. God was telling Moses that anyone who commits a crime should have a punishment that fits the crime, and that a punishment that was too harsh for the crime committed was unacceptable. So for example, if a man murdered another man, capital punishment should be administered (Leviticus 24:17), anyone who takes the life of another animal must buy a replacement for that animal, or at least take the life of his own (Leviticus 24:28). God was trying to make sure that people weren’t punished too severely for whatever crime they committed. The punishment must match the crime.

However, just like in the modern era, people rip Bible passages out of context to try to support whatever they do. Just as people today rip Matthew 7:1 right out of its context to condemn all judging, so people in Jesus’ day ripped Leviticus 24:19-20 out of context in order to justify getting revenge on others. This is what Jesus was doing in Matthew 5. Jesus was correcting a misinterpretation of Leviticus 24:19-20 while at the same teaching that we ought to love our enemies, and do good to those who do evil to us.

So Jesus wasn’t contradicting His Father, He was correcting a misinterpretation of what His Father said.

On Talking Snakes and Donkeys