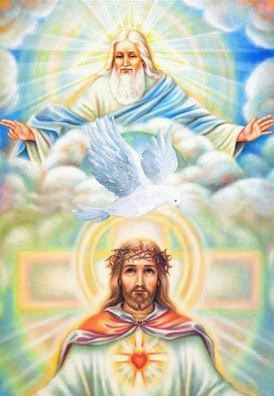 The Bible says in John 3:16 “For God so loved the world that He gave His only begotten son that whosoever believes in Him will not perish but have everlasting life”. The Bible teaches that Jesus is God Himself, the second person of The Holy Trinity, the Creator of the universe (see John 1:1-14, John 10:30, Isaiah 9:6, Colossians 1:15-17). How can Jesus be “begotten” from God and still be God? One of the attributes of God as taught in The Bible is His eternal, uncreated existence (as you saw from my post “If God Created The Universe, Who Created God” the other day). How can Jesus be God and yet not be eternal? Well, historically there have been 3 different ways of explaining the sense in which Jesus is eternal (in His divine nature at least) and yet begotten of God. All of them resolve the issue. I don’t think all of them are true. I think only the last one I’ll list is true, but nevertheless, any of the proposed solutions to the issue are enough to resolve the difficulty. Let’s look at them, shall we?

Solution 1: Jesus’ Divine Nature Is Eternal, but His Human Nature is Begotten.

Many people take the term “begotten” to be bound up in the doctrine of the incarnation (the Christian doctrine which teaches that God The Son became a human being). This view suggests that while Jesus’ divine existence is beginningless (He existed as God from eternity), nevertheless we all know that Jesus’ human existence had a beginning. There was a time when Jesus the human was conceived in the womb of Mary and exited her womb in either a cave or a stable in the town of Bethlehem. Jesus’ human nature was “begotten” and in this since Jesus is Yahweh’s “begotten” son. Jesus was born as a human infant. His human body had a beginning to it’s existence, even though the soul of Jesus (the divine Logos) was beginningless.

Solution 2: God The Father Is The Cause of God The Son’s Existence, But Not In A Temporal Sense.

In his book “Mere Christianity”, C.S Lewis explained what He thought The Bible meant when it said that Jesus is God The Father’s “begotten” son. In fact, He argued that Jesus being “begotten” of God actually counted in favor of Christ’s divinity. He wrote:

“When you beget, you beget something of the same kind as yourself. A man begets human babies, a beaver begets little beavers and a bird begets eggs which turn into little birds. But when you make, you make something of a different kind from yourself. A bird makes a nest, a beaver builds a dam, a man makes a wireless set—or he may make something more like himself than a wireless set: say, a statue. If he is a clever enough carver he may make a statue which is very like a man indeed. But, of course, it is not a real man; it only looks like one. It cannot breathe or think. It is not alive.”

C.S Lewis went on to say

But doesn’t “begotten” indicate a beginning? That God gave birth to Jesus’ divine spirit, so to speak? No. Lewis understands Jesus’ divine nature to be caused by the Father, but not in a temporal sense. He writes:

“Imagine two books lying on a table one on top of the other. Obviously the bottom book is keeping the other one up-supporting it. It is because of the underneath book that the top one is resting, say, two inches from the surface of the table instead of touching the table. Let us call the underneath book A and the top one B. The position of A is causing the position of B. Is that clear? Now let us imagine – it could not really happen, of course, but it will do for an illustration -let us imagine that both books have been in that position for ever and ever. In that case B’s position would always have been resulting from A’s position. But all the same, A’s position would not have existed before B’s position. In other words the result does not come after the cause. Of course, results usually do: you eat the cucumber first and have the indigestion afterwards. But it is not so with all causes and results.”

“…….In the same way we must think of the Son always, so to speak, streaming forth from the Father, like light from a lamp, or heat from a fire, or thoughts from a mind. He is the self-expression of the Father-what the Father has to say. And there never was a time when He was not saying it. But have you noticed what is happening? All these pictures of light or heat are making it sound as if the Father and Son were two things instead of two Persons. So that after all, the New Testament picture of a Father and a Son turns out to be much more accurate than anything we try to substitute for it.”

The phrase “begotten” is only in the King James Version of John 3:16. The word in the original version is “Monogenes”

So what does monogenes mean?

According to the Greek-English Lexicon of the New Testament, monogenes has two main definitions. The first definition is “pertaining to being the only one of its kind within a specific relationship.” This is its meaning in Hebrews 11:17 when the writer refers to Isaac as Abraham’s “only begotten son” (KJV). Abraham obviously had more than one son, but Isaac was the only son he had by Sarah and Isaac was the only son of the covenant. Therefore, it is the uniqueness of Isaac among the other sons that allows for the use of monogenes in that context.

The second definition is “pertaining to being the only one of its kind or class, unique in kind.” This is the sense that is implied in John 3:16. John was principally concerned with signifying that Jesus is the Son of God (John 20:31), and he uses monogenes to put emphasis on the fact that Jesus is uniquely God’s Son, so that they are sharing the same divine nature as God. This, of course, is in contrast with believers who are God’s sons and daughters by adoption (John 1:12-13, Ephesians 1:5). Jesus is God’s “one and only” Son. Jesus is a person of the Trinity, Christians are not.

I think the 3rd answer is the most plausible. But as you can see, any of the 3 above answers resolves the difficulty. The doctrine of Jesus being “begotten” (monogenes) does not damage the doctrine that Jesus Christ is God in the least bit.

Tags: The Deity Of Jesus

Why The Word Is Not Merely “a” god

5 Objections To Jesus Being God Refuted