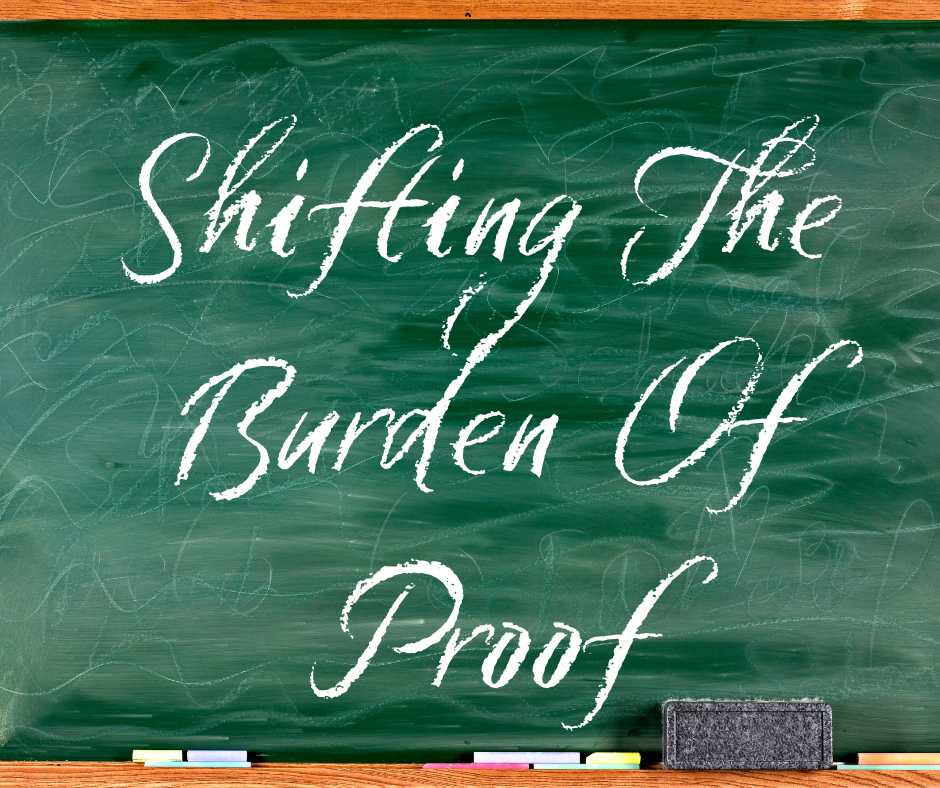 Alrighty, I’m bloggin’ for the Almighty. Hold on Sally, see, I’m gonna be writin’ about fallacies.

Ok. So I am no rapper, but I think I am a pretty good Christian Apologist. Welcome to part 21 of this series on logical fallacies. By this point, I’ve decided to not write on every logical fallacy that there is and instead only write about the ones most relevant to Christian Apologetics (i.e fallacies committed by skeptics when you debate them, fallacies made by Christians during in-house debates, etc.). There are so many fallacies out there that this multi-part blog post series would end up being extremely long, and I’d like to write about other things at some point. Therefore, I’m only mentioning the fallacies that are more common to the Christian Apologist’s debate arena and just ignore the ones that rarely if ever come up. However, there are philosophy websites out there (and Wikipedia) that you can go to if you want to learn about the ones I haven’t mentioned.

Shifting The Burden Of Proof

This fallacy is committed when someone makes a claim and rather than substantiate it with reason and evidence, put the onus on the detractor to disprove it. If I make a claim, it is up to me to prove the claim. It is not up to you to disprove the claim. It is, however, up to you to refute whatever arguments I put forth in favor of my claim. I say this because many atheists pound it into my head that I have the burden of proof when I say “God exists” or “Jesus rose from the dead.” Fair enough. But when I give arguments for God’s existence, like The Kalam or Fine Tuning arguments, if you are to continue to reject my claim, you have to show where my arguments went wrong. I admit that we Christians often do bare the burden of proof [1](and I believe we can carry that burden pretty easily), however, that fact does not excuse you from having to engage with the arguments we do put forth.

Christian: “The Bible is true.”
Atheist: “Prove it”.
Christian: “No, you prove that The Bible’s not true.”

The Christian made the claim that The Bible is true. The atheist asked him to prove it or to provide reasons to believe that it was true. Rather than giving a reason for the hope that is in him (1 Peter 3:15), the Christian instead demanded the atheist to prove that The Bible wasn’t true.

Now, the Atheist would bare the burden to prove that The Bible is not true, but not in the above circumstance. If the Atheist had said “The Bible is not true” and the Christian had responded “Prove it”, the Christian would not be shifting the burden of proof. Why? Because the one who bares the burden is the one who makes the claim. Not even atheists can go around just saying anything they like without having to back up their claims with reasons. If you want me to believe God does not exist after spending 2 minutes telling me how much an idiot I am to believe He does, I’m going to expect you to back up that claim with some arguments and evidence. If you come up to me and say “The Bible is a bunch of fairy tales and you’re an idiot to believe it”, I am not unjustified to respond “Really? What lead you to that conclusion?”

Christian Bares The Burden Of Proof

Christian: “The Bible is true.”
Atheist: “Prove it”.
Christian: “No, you prove that The Bible’s not true.”

Atheist Bares The Burden Of Proof

The one who bares the burden of proof is the one who makes the claim first.

The person here made the statement that Jesus never existed (which is denied by virtually all historians, even the non-Christian ones) and when the Christian asked him to substantiate his claim, he shifted the burden of proof onto the Christian to prove that He did exist. Now, if this Christian is well read, he could probably meet that challenge. However, he would be unjustified in allowing the skeptic to shift the burden of proof onto him. He made a claim and refused to substantiate it.

Another Example:
“Evolution is a fact.”
“Really? Can you prove it?”
“It’s up to you idiot creationists to disprove it.”

Anyone can make a claim. It’s easy. It’s not so easy to substantiate those claims. Don’t let the unbeliever trick you into thinking you do all the heavy lifting. He has a worldview too, and makes claims about it, have him back up those claims. After all, you’re willing to back up yours.