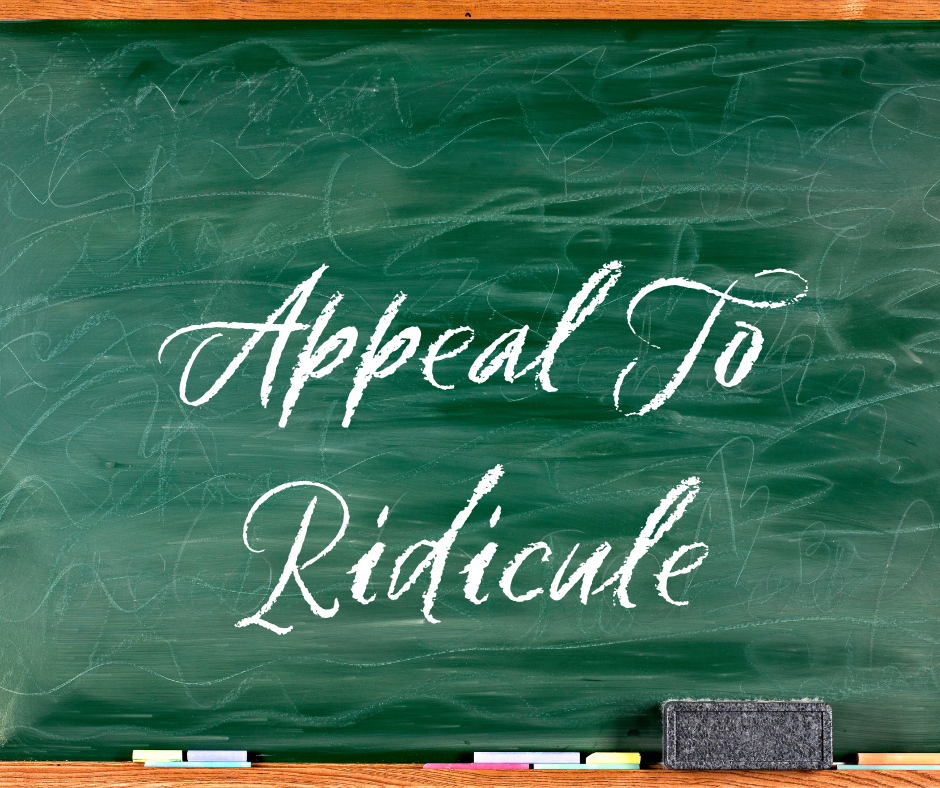 There are actually a lot more informal fallacies than the ones I’ve talked about so far plus the ones listed above, but they rarely if ever come into discussions about God’s existence, the resurrection of Jesus, or any other topic relevant to Christian Apologetics, and my goal in each of these posts was to give 2-3 examples of these fallacies occurring in conversations between the apologist and the skeptic or between 2 disagreeing Christians. Since the fallacies not mentioned in this series don’t occur — at least in my experience — in apologetic discussions, I would have a hard time coming up with examples on that theme. Secondly, there are so many of the informal type that this series could potentially run into late August [1]that’s my guesstimate, I haven’t actually run the numbers. You can see how many articles I would have to write by looking at this list on Wikipedia.

So let’s now move onto….

The Appeal To Ridicule

Person 1 claims that X is true.

Do I really need to show examples of this? Over 90% of anti-Christian and pro-atheist memes on the internet commit this fallacy. All you have to do is Google “Anti-Christian Memes” or “Christianity Memes” or “Christianity Is Stupid” and you’ll find lots and lots of examples of this fallacy. Internet Atheists are prone for committing this fallacy more than any other group I’ve come across. They make memes that do nothing but mock Christianity and over half of the time, the points they’re trying to make are bad because they attack straw men or grossly distort what Christians believe.

Just click on this sentence to get a big sample size of atheists appealing to ridicule.

Atheists will always mock misrepresentations of Christianity. That’s not  going to change until Christ returns and every knee bows before Him (Philippians 2:10). But what you can do is set the record straight by correcting their faulty eisegesis of “evil passages” in The Bible, or tell them what Christians really believe, or letting them know that the issue isn’t as simple as their 30 character meme makes it out to be.

That does it for this logical fallacy. Come back tomorrow to read about another one.