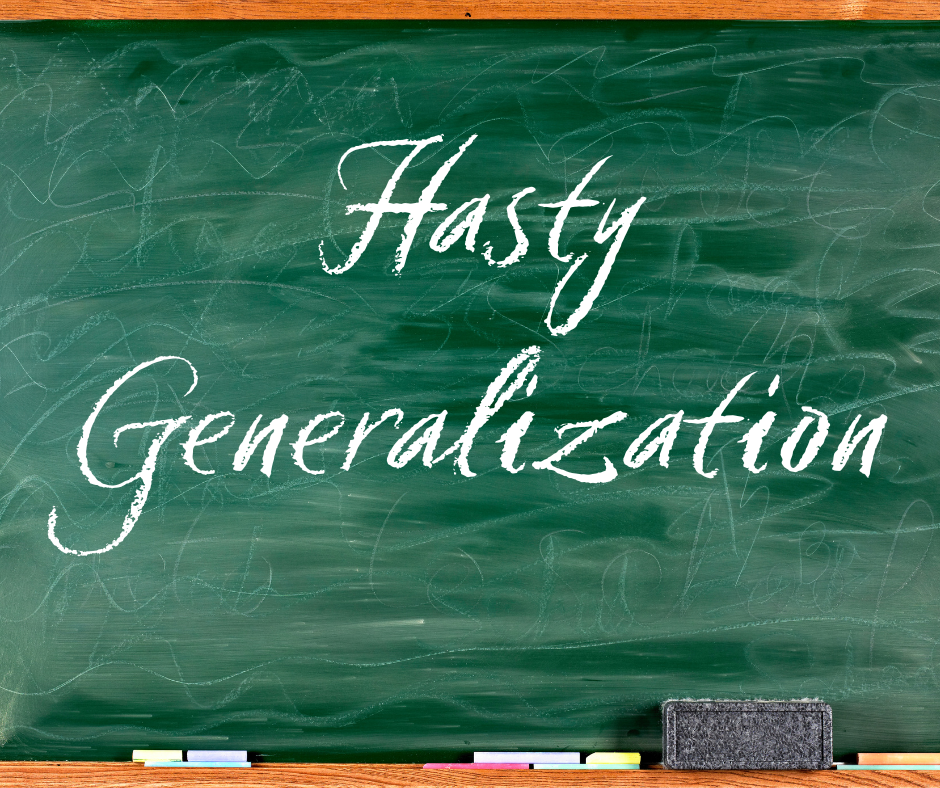 In this blog post, I’m going to talk about…

This logical fallacy is committed when someone takes a small sample size and makes a conclusion based on that small sample size instead of looking at statistics that are much more in line with the typical or average situation.

One example that comes to mind is a meme circulated by atheists on the internet that has the caption “Science flies you to the moon. Religion flies you into buildings.” And the caption of the meme is over a picture of the space shuttle going to the moon, and a picture of the twin towers being destroyed by Islamic terrorists. The point the meme is making is that science is good and religion is bad. Science helps humanity while religion hurts humanity. Science helps humanity progress while religion holds people back. The problem is that this is a hasty generalization. It’s taking one good example from science and one bad example from religion and drawing a conclusion based solely on those. But I can made exactly the opposite argument using different samples! For example “Science builds things like guns, tanks, and missiles that kill and maim human beings. Religion preaches peace and love for ones neighbor and enemies.” or “Science creates nuclear bombs that kill many people. Religion creates hospitals that save the lives of many people.”

Another Example: “The New World Translation is a corrupted translation. It’s a translation designed to propagate heresy! Therefore, all modern translations except for the King James Version are corruptions and should be avoided.”

In this example, a KJV Onlyist is trying to make his case for only reading the King James Version of The Bible by appealing to one actually corrupted version. He took one example of a truly corrupted translation of The Bible and made a sweeping statement about all modern translations. This is fallacious because it doesn’t follow that because one translation is corrupted that therefore they all are.

We have good reasons to believe that most modern English translations of scripture stay true to the original meaning of the text. For one thing, they all essentially say the same thing just in different words. Comparing the NIV with the KJV or the ESV with the KJV or the NIV with the ESV, you come up with the same doctrines. Read John 1 in KJV, NIV, ESV, NLT, or NASB and you will conclude every time that Jesus is God and created the universe. Read Hebrews 1 in the KJV, ESV, NLT, or NASB, and you’ll again conclude that Jesus is God and created the universe. If you’re really paying attention, you’ll conclude that not only is Jesus God but Jesus is a distinct person from God The Father because God The Father addresses His Son in the second person [1]very weird if they’re the same person. Read Ephesians 2:8-9 and Romans 4 in the KJV, ESV, NLT, or NASB, and you’ll conclude that we’re saved soley by grace through faith in Jesus Christ and that works play no part in gaining right standing with God. Read John 3:16 in any translation, and you’ll conclude that God’s love of the world prompted him to sacrifice His only son so that those who believe in Him won’t perish but have eternal life.

If the KJV is pure, and these newer translations get the same points across as the KJV (just in a different way of phrasing it) then I don’t see why any of the above mentioned translations should be considered corrupt. Now, some KJV Onlyists point to “missing passages” in translations like the NIV, but they fail to understand that the passages omitted in the newer translations were likely never in the original copies of The Bible to begin with, because they’re not in the earliest of the early manuscripts and only appear in manuscripts dated much later. See this article to read more about this.

Moreover, it’s highly improbable that as many translation teams working on so many different translations, that they would ALL be in on some grand conspiracy to corrupt The Bible. Think about it; are the teams behind the NIV, NLT, ESV, NASB, NKJV, the TLB, etc. all trying to corrupt The Bible? Surely if they were, more born again Christians who are Hebrew and Greek scholars would have caught onto this and would have broken the conspiracy. In other words, we’d expect more Christian Hebrew and Greek scholars to be KJV onlylists.

Dr. James White has some great material on refuting KJV onlyism, so to dig into this subject in more detail, I suggest checking out his work. He’s even got a book on the topic.

Another Example: Jared had only talked to 2 Molinists before. Both of them did not believe that God wanted everyone saved or that Jesus died for the whole world. He rejected Molinism because He believed God did want all people saved and Jesus did die for the whole world.

Had Jared not been so hasty and researched Molinism more in depth, he would have found out that Molinism is at its bare minimum, a view of divine sovereignty and human free will. It tries to reconcile God’s meticulous providence of history with libertarian free will. Soteriologically, one can be Arminian or Calvinist.

You see, Molinism transcends the Arminian/Calvin debate as Richard Bushey pointed out in his article “What Is Reformed Molinism?” and as I pointed out in “Molinism and Its Relation To Soteriology”. Molinism is basically just a view of divine providence and human freedom. Any soteriological belief you want to insert into your Molinist view is up to you.

An exception can be made when a larger sample size isn’t available. Sometimes a small sample size is all you have to work with. An example of this is if you and a friend are walking through the desert and your friend gets bitten and dies right after that. In this case, it wouldn’t be fallacious to assume that the snake is venomous. While it’s possible your friend could have died from some other cause and it just so happened to occur right after a non-venomous snake bit him [2]he may have had a heart attack, a stroke, or an aneurysm, or some other cause, it’s too much of a coincidence for inferring that. Another cause would be possible, but not probable. In this case, it would neither be hasty generalization, nor post hoc ergo propter hoc, especially since snakes are known to be venomous and people have been known to die from snake bites, and your friend died right after being bitten by one. Your inference would be even more justified if he had experienced symptoms characteristic of a person slowly dying from snake venom.