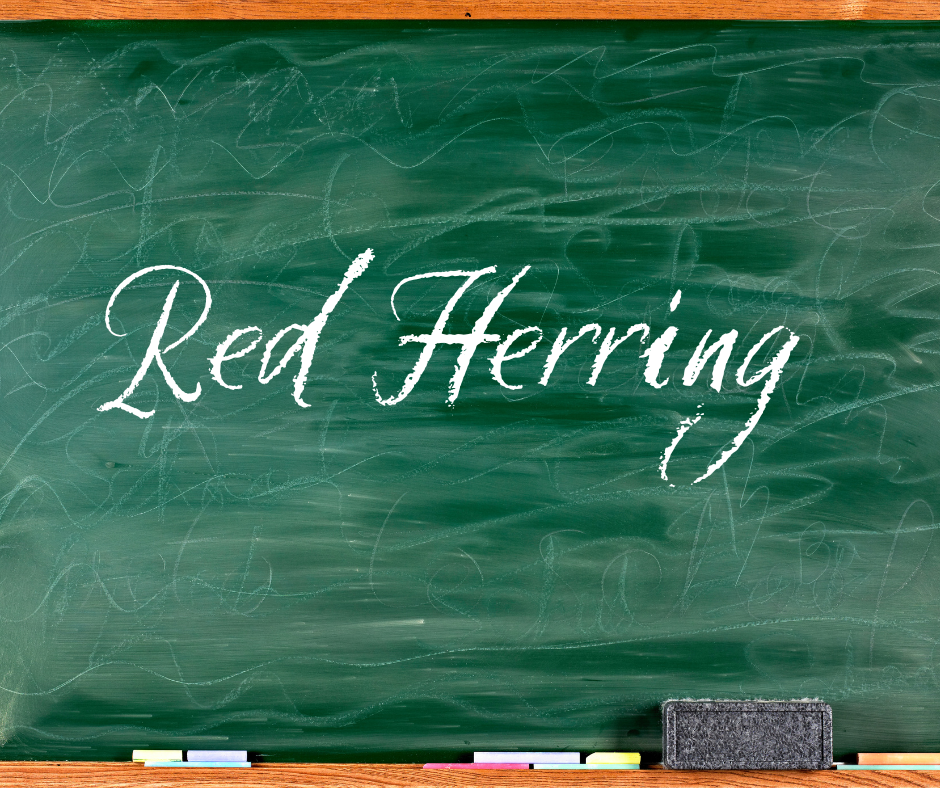 This is part 5 of my series on logical fallacies. A logical fallacy is a mistake in reasoning. Just as someone can stumble on occasions while walking, so one can stumble on occasions when thinking. Logical fallacies can come in two forms; formal and informal. Formal fallacies, as the name suggests, is when a fallacy is made in the form of an argument. A formal fallacy is committed when the syllogism doesn’t follow one of the rules of logic (e.g modus ponens, modus tollens, hypothetical syllogism, etc.) and as a result of not obeying the rules of logic, the conclusion cannot be inferred even if the premises of the syllogism are all true. In part 1 of this series, I gave an example of what a formally fallacious argument looks like.

Last time, we looked at The Genetic Fallacy. This time, I’ll be talking about…

A red herring is something that misleads or distracts from a relevant or important issue. Usually this happens when Person A gives argument X and Person B, instead of giving a rebuttal to argument A, brings up Argument Y instead. If Person A falls for the red herring, he’ll try to refute argument Y instead of drawing attention back to argument X and forcing his opponent to deal with it.

The origin of the name of this logical fallacy comes from when people would use kippered red herrings to train hounds to follow a scent, or to divert them from the correct route when hunting.

Examples Of The Red Herring Fallacy

One example of this fallacy happened to me a while back when I debated an atheist on Twitter (Twitlonger to be precise). The topic was the historicity of Jesus’ resurrection. I had presented The Minimal Facts Case For Jesus’ Resurrection, and instead of dealing with my argument that only the Resurrection hypothesis could explain all 5 facts, he quickly turned to disputing the historicity of the slaughter of the babies in Bethlehem by King Herod, and the legitimacy of the star that guided the wise men to the baby Jesus, and the historical plausibility of the census that Luke records. He brought all 3 of these objections up in a single Twitlonger post and guess what? I fell for it! And I’ve been kicking myself over it ever since.

Look, the historicity of the 3 aforementioned events has absolutely no baring on whether Jesus rose from the dead! The 5 facts of (1) Jesus’ death by
crucifixion, (2) Jesus’ tomb was empty the following Sunday morning, (3) Jesus’ disciples strongly believed they saw Him alive shortly after His death, (4) James, the brother of Jesus and hardened skeptic of Christianity, converted on the basis of what he perceived as the risen Jesus appearing to him, and (5) the church persecutor Saul Of Tarsus converted to Christianity on the basis of what he perceived as an appearance of the risen Christ. STILL need to be explained.

Moreover, I arrived at those facts by employing the historian’s criterion of authenticity. I didn’t presuppose that The New Testament was divinely inspired when making my case. No! I treated The New Testament documents as  I would any other set of ancient documents; as purely human fabrications that claim to be able to tell us about something that happened a long time ago. Historians use these principles all the time when examining secular documents, and that’s what I was doing with The New Testament! Using these historical tests of authenticity, I applied them to The New Testament and concluded the 5 aforementioned facts. The methodology I employed at arriving at those facts did not presuppose the divine inspiration, the inerrancy, or the historical reliability of The Bible. As such, even Herod didn’t kill the infants as Matthew says, even if there was no star that guided the wise men and even if there was no census as Luke says, even if The Bible were wrong on these 3 facts, it would still be the case that (1) Jesus died by crucifixion, (2) Jesus’ tomb was empty the following Sunday morning, (3) Jesus’ disciples strongly believed they saw Him alive shortly after His death, (4) James, the brother of Jesus and hardened skeptic of Christianity, converted on the basis of what he perceived as the risen Jesus appearing to him, and (5) the church persecutor Saul Of Tarsus converted to Christianity on the basis of what he perceived as an appearance of the risen Christ.

These 5 facts would still be confirmed by the historical criterion of authenticity and still need to be explained even if The Bible were wrong on the slaughter of the infants, the Christmas star, and the census.

Another Example:
Me: “…And that’s why should believe Jesus rose from the dead.”
Person I’m Talking To: “If God is good and all powerful, why is there so much evil in the world?”

Did you see what this person did? This person changed the subject from Jesus’ resurrection to the problem of evil. Now, I could address this person’s question. I could go into the topic of humans abusing the free will God gave them, and tell her that God can bring good things out of bad situations and give her illustrations of what this looks like (e.g Sliding Doors, Joseph’s story in Genesis), and that God will do away with evil once and for all some day (Revelation 21). But, it would be a better idea to bring her attention back to the subject at hand (i.e Jesus’ resurrection). I would say “That is a good question, and I’d love to discuss it with you some time. But you said there was no evidence that Jesus rose from the dead. I just gave you what I think is pretty powerful evidence that He did. What are your thoughts on the arguments I just made?” This brings her attention back to the topic at hand while also not ignoring what she said about evil and suffering.

If I had addressed the problem of evil at that particular time, I would have fallen for the person’s red herring.

Another Example:
Me: “…..Therefore, God exists.”
Person I’m Talking To: “God is so evil! Look at what He did to the Canaanites! He’s a genocidal maniac!”

Here, I had just given an argument for God’s existence, and just in case you’re a snarky atheist who wants to say “No you didn’t! You just stated your conclusion!” please note that this is for illustrative purposes only, and the periods preceding the words “Therefore God exists” indicates there was more to what I said in this scenario than what’s within the quotation marks. Anyway, this person responds with the old God-is-evil-because-He-destroyed-the-Canaanties objection. Regardless of what you may think about this event in the Old Testament, the fact of the matter is that it’s totally irrelevant to the soundness of an argument for God’s existence, be it The Kalam Cosmological Argument, or The Fine Tuning Argument, or, The Moral Argument, or The Ontological Argument.

If I addressed his objection to God’s character, I would be falling for a red herring. Instead, what I would do is shift this atheist’s attention back to the argument I just gave and try to get him to address it. By the way, if you want to hear how I do respond to this particular objection, check out my blog post “Is God Evil For Ordering The Destruction Of Nations In The Old Testament?”

That does it for this week’s logical fallacy. Come back to Cerebral Faith next week to read about another one. It’s important that we, as Christians, recognize bad reasoning when it comes our way. Many people are being talked out of their faith by people who use bad reasoning. If you can spot the fallacy, you can refute the argument, and thus negate the conclusion.