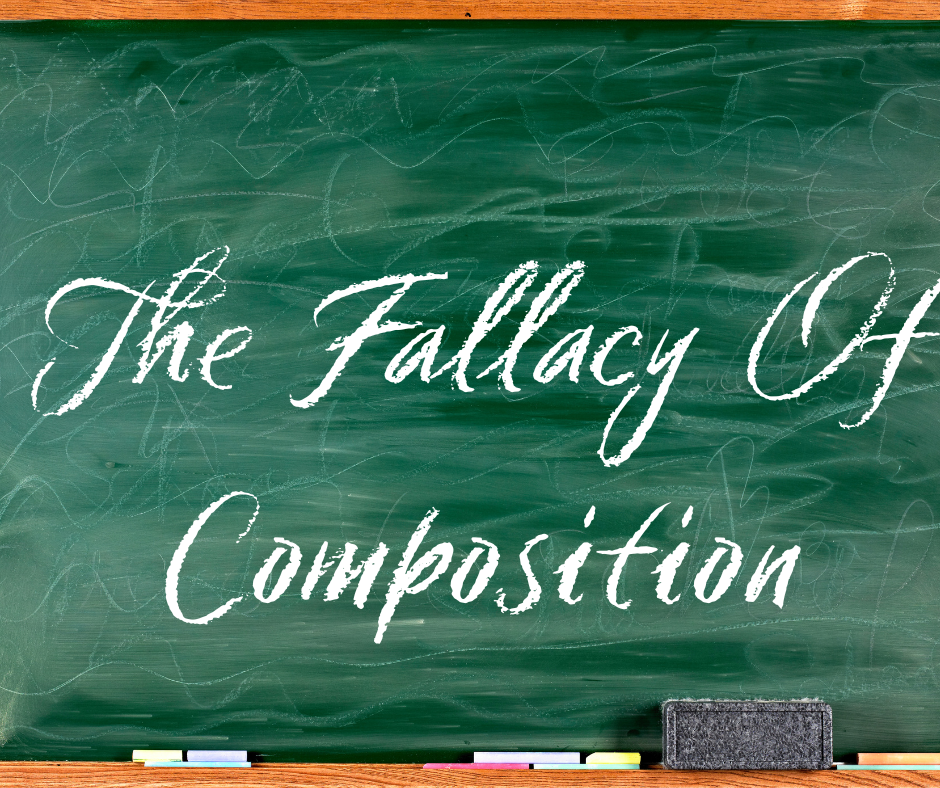 The Fallacy Of Composition arises when one infers that something is true of the whole from the fact that it is true of some part of the whole. This is fallacious because it isn’t always the case that something has the same property as one of its’ parts. For example, every part of an elephant may be light in weight, but it doesn’t follow that the whole elephant is light in weight. Sometimes things share the property with each of their individual parts, but that isn’t always the case. For example, every picket of a fence may be green, and the whole fence is also green. But it isn’t always the case that things share the property of their individual parts, so to infer that they do is logically fallacious.

Examples Of The Fallacy Of Composition

If you’re new to this site, to The Kalam Cosmological Argument, or to apologetics in general, you may not know what this person is talking about. Therefore, some background information will need to be given before I can proceed. The argument this person is responding to is an argument defenders of The Kalam Cosmological Argument give when arguing for the truth of the second premise of the argument which is “The universe began to exist.” The point is that if this premise is false, the present could never arrive, for before today could arrive, yesterday had to arrive, before yesterday could arrive, the day before yesterday had to arrive. Before that day could arrive, the day before that had to arrive, and so on back to infinity. No day could ever dawn because there always be a day preceding it that would have to dawn first. Indeed, there would be an infinite number of days that would have to arrive before any day in the whole infinite set could ever arrive. In that case, today could never have arrive. This is obviously absurd because today has arrived. This leads to the conclusion that the past is not infinite and that the universe and time itself had a beginning a finite time ago.

The objector here is arguing that any point within the infinite past is only a finite distance from any other point in time. So you could conceivably get to one point in time from another, since only a finite number of points need to be crossed. The problem with this argument is that it commits the fallacy of composition.

Another Example: “Christians I’ve met are young earth creationists. Therefore, all Christians deny an old earth and evolution.”
Just because some Christians deny the accepting dating of the Earth and deny evolution, doesn’t mean all do. I accept that the universe is around 14 billion years and the Earth is about 4 billion, though I do dispute Darwinian Evolution. Some Christians though, don’t even dispute that. Some, like Francis Collins, accept Darwinian Evolution as well as an Old Earth. So one should not confuse the part with the whole, thinking that because some
Christians believe the universe is no older than 6,000 years old, that therefore we all do.
.
Conclusion
.
That does it for today’s post. Come back tomorrow to read about another logical fallacy. Learning about logical fallacies is important. We Christians should master spotting logical fallacies in arguments because many people are being talked out their faith by non-Christians who use bad reasoning. To the untrained mind, some of these arguments can sound convincing even though they shouldn’t be because they’re logically fallacious.
Liked it? Take a second to support Evan Minton on Patreon!