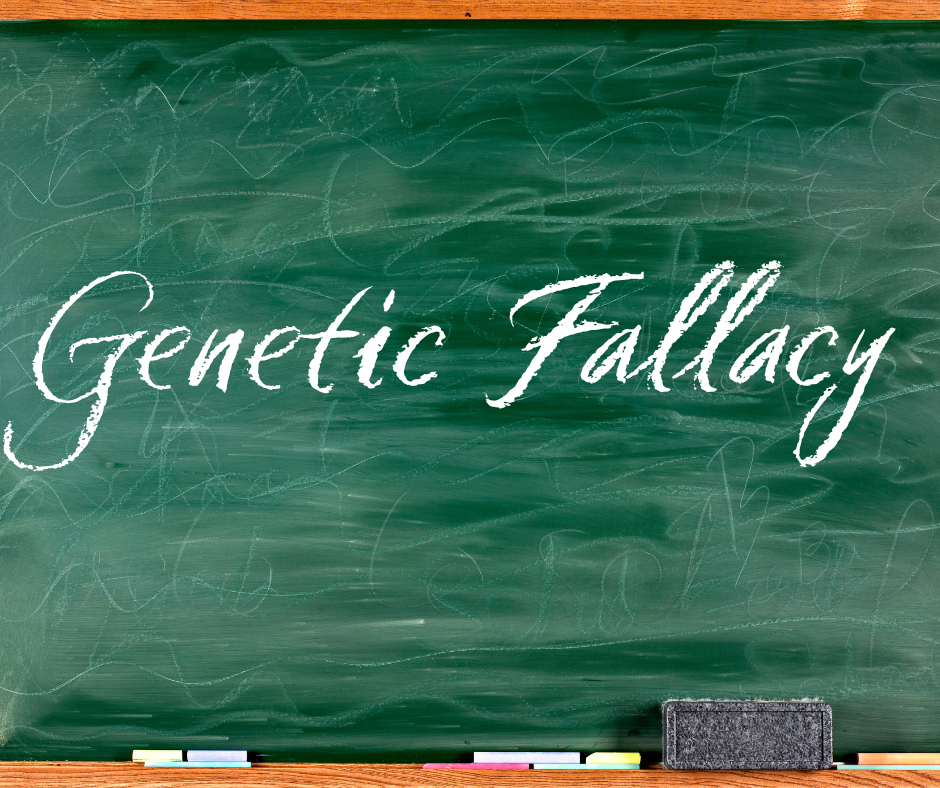 Last time, we looked at The Straw Man Fallacy. This time, we’ll be taking a look at…

Examples Of The Genetic Fallacy.

One example of The Genetic Fallacy that immediately comes to mind is “You’re only a Christian because you were raised in a Christian home. If you were raised in a Muslim home, you’d be a Muslim. If you were born in a Buddhist home. You’d be a Buddhist.”  This is something I’ve heard several atheists say to me and other Christians on multiple different occasions. The first time I heard it was by an elderly atheist man on Twitter. He has since deleted his account, but he was one of the first few atheists I tried to witness to after I started studying Christian Apologetics.

I didn’t know the name of this logical fallacy at the time, but I realized something was off about this statement. The fact is; it doesn’t matter how I came to believe that Christianity is true. It could be true or false regardless of how I, Evan Minton, came to believe it. Moreover, the soundness of the arguments I was giving also didn’t depend on how I came to believe Christianity was true. My argument that the complexity of the body was best explained by the work of an intelligent designer was totally independent of the origin of my faith.

But I’d also like to address this claim from another angle. It is not true that I’m only a Christian because I was raised in a Christian home. I may have believed Christianity was true at the age of 5 because my parents told me it was true, but that it is no longer the case. I believe Christianity is true now on the basis of arguments and evidence, like The Kalam Cosmological Argument, and The Fine Tuning Argument, and The Moral Argument, and the historical case for Jesus’ Resurrection. I realize my parents can be wrong, and the reasons I now believe it, I did not learn from my parents. Neither they nor I knew that these arguments even existed until a few years ago. I introduced them to apologetics.

Another Example: “Molinism is a view that every good protestant should reject! It was formulated by a Jesuit Priest named Luis Molina! A JESUIT! Are you, as a protestant, seriously going to embrace a view by a Catholic like him!?”

As you can see, the detractor of Molinism here has committed the genetic fallacy. He’s trying to persuade protestants not to become Molinists because the founder of the theory was a Jesuit Priest; a branch of priests within Roman Catholicism. The problem is clear: whatever else Molina got wrong in his theology, it doesn’t mean that he got it wrong in Molinism. Molinism could have originated somewhere else, and it would be just as legitimate as if it originated with a Catholic. Moreover, it’s origin is irrelevant as to whether it’s true. I think it is true. I am a Molinist, and I have written several articles giving my various reasons why I think it’s true, such as in “5 Reasons To Believe Molinism Is True” and “Is Molinism Biblical?” and the reasons I give in the aforementioned articles are unrelated to where Molinism originated from. The detractor of Molinism commits the genetic fallacy because he attacks the origin of the view rather than the view itself and the arguments in favor of it.

Another example: “The Bible was written by a bunch of bronze aged goat herders out in the middle of nowhere! Why should we believe anything it says!?”

That does it for this week’s logical fallacy. Come back to Cerebral Faith next week to read about another one. It’s important that we, as Christians, recognize bad reasoning when it comes our way. Many people are being talked out of their faith by people who use bad reasoning. If you can spot the fallacy, you can refute the argument, and thus negate the conclusion.