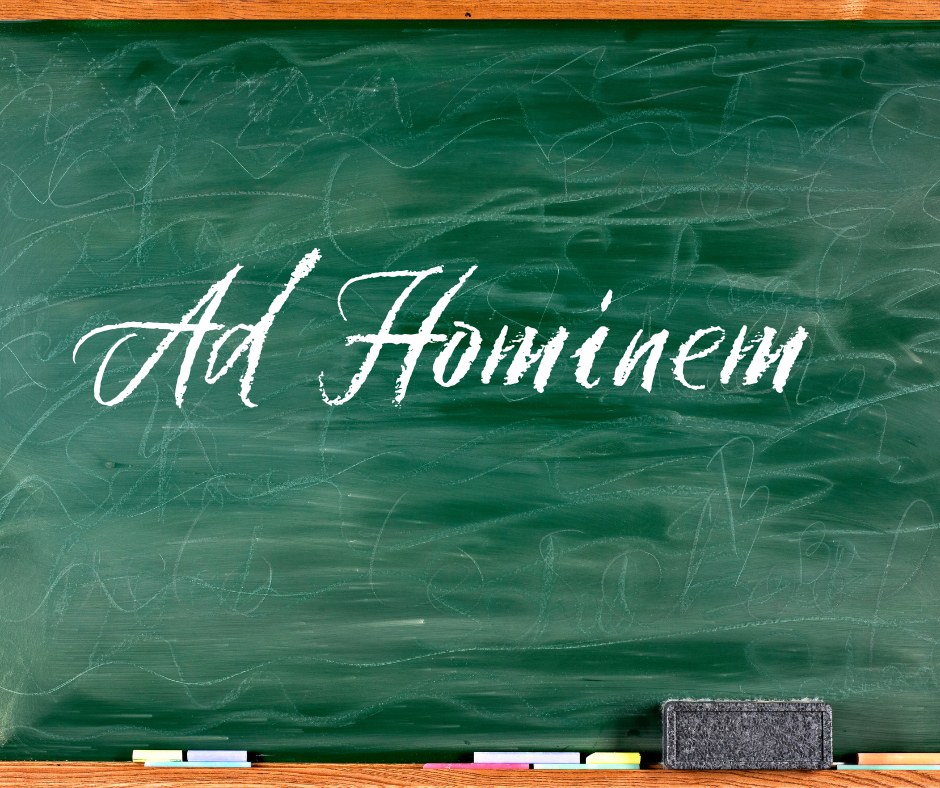 This is the first part in an ongoing series on logical fallacies. In this series of blog posts, I will be addressing all of the different logical fallacies people often make when reasoning. I plan on naming the logical fallacy, describing the fallacy, and finally giving some examples of when the fallacy is committed. Since this blog is primarily about Christian Apologetics, I will mostly be giving examples of unbelievers commit this fallacy when arguing against the Christian faith.

Now, what is a logical fallacy? A logical fallacy is when someone makes an argument for or against a claim but makes a mistake in their reasoning process. Just as a person can stumble on occasions when walking, a person can stumble when reasoning. As a result of committing a logical fallact, the person’s conclusion does not follow from their premises. Fallacies come in two forms; formal and informal. A formal fallacy involves making a mistake in the formulation of a syllogism. A formal fallacy is made in syllogistic reasoning when the steps of the argument do not obey the rules of logic (e.g modus ponens, modus tollens, hypothetical syllogism, disjunctive syllogism, etc.). Given that the argument does not obey any of the rules of logic, the argument is a non-sequitor. It’s logically invalid.

An example of a logically invalid (i.e non sequitur) argument would be

An example of affirming the consequent would be:

The conclusion doesn’t follow from the premises. Bob may be a mammal, but that doesn’t mean he’s a human. Bob could be the name of someone’s cat, or dog, or horse. These are all mammals too.

Atheists often appeal to the ad hominem fallacy when arguing against Christians. When arguing against Intelligent Design, for example, atheists will point out that the majority of proponents for Intelligent Design are evangelical Christians and that therefore ID is nothing but religious propaganda disguised as a legitimate scientific theory, and is therefore false and can be dismissed. Do you see what they did? They commited the ad hominem fallacy! They dismissed Intelligent Design on the basis of some factor about the proponents of the theory (i.e the fact that they’re evangelical Christians). So what if most design advocates are Christians? So what if it is in large part religiously motivated? That doesn’t mean intelligent design is false! You cannot dismiss intelligent design on the basis of anything about the proponents of the theory. In order to refute the design hypothesis, you will have to show that either the logic of their arguments are invalid or that their premises are false or at least unsupported by the scientific evidence.

By the way, if the atheist wants to refuse to think logically and cling to his conclusion that intelligent design is false that most of his proponents are Christians, we can easily use his bad reasoning against him. I could argue “Most Darwinists are Atheists, they only propagate the theory of Darwinian Evolution on the basis that they think it rules out God as an explanation of how life arose. Therefore, Evolution is nothing but anti-God secularist propaganda disguised as legitimate science.” Using the atheist’s faulty reasoning, I concluded that Darwinian Evolution is false and can be dismissed.

This is clearly absurd. The fact that most intelligent design advocates are Christians no more invalidates design than the fact that most Darwinists are atheists. But if the sword cut at all, it would cut both ways.

Now, while I do think ruling out God is a powerful motivation for many to propagate evolution, I don’t think it’s false on that basis. I think it’s false because the evidence doesn’t support it. It would be foolish to rule out a theory because of the religious beliefs (or lackthereof) of the scientists advocating it.

Another example would be “I cannot believe in Christ. So many Christians are hypocrites!” This is an excuse many people give for not becoming Christians. They remain in their atheism, agnosticism, or their none-ism because of examples of Christians behaving badly, such as pastors who were caught cheating on their wives, or Christians verbally harassing gays, or what have you. The problem is again, that they’re reasoning commits the ad hominem fallacy. The fact that some or even many Christians are hypocrites does not prove that Christianity is false. The fact that Bob preached against pre-marital sex and is later caught having pre-marital sex with his girlfriend doesn’t show that God does not exist or that Jesus never rose from the dead, or any other essential doctrine of Christianity is false. All it shows is that Bob disobeyed God and His Word. What Bob says about pre-marital sex is true even if he doesn’t follow his own advice. The fact that some Christians don’t behave Christ-like is no excuse for you not to become a Christian.

If Tom gives an argument for Christ’s resurrection, and then you find him cheating on his wife, having pre-marital sex, harassing gay people, or any other sin, you shouldn’t reject his conclusion of the argument because of of those things. After all, a Christian living the way he or she is supposed to could give the argument. Would that magically turn the argument into a good one? Why is the argument bad when given by Tom, but it all of a sudden becomes good if it’s given by Suzan?

Another example I’m reminded of is when someone commented on YouTube that William Lane Craig was a hypocrite because he said he would still believe God exists even if the Kalam Cosmological Argument were refuted (on the basis of the inner witness of The Holy Spirit). So what if he is a hypocrite? That doesn’t make The Kalam Cosmological Argument fallacious. It’s a sound argument as long as its logically valid and has true premises. Regardless of whether Craig would or would not continue to believe in God if the argument was refuted is irrelevant. Again, what if someone who isn’t a hypocrite gave the argument instead? Would that magically turn it into a sound argument?

Another example I’ve heard is when people attack male pro-life advocates simply for being male. I’ve had pro-choice women tell me that I have no right to weigh in on the issue of abortion because I can’t pregnant. This is a women’s issue, they argue, so I should just keep my mouth shut. Who am I after all to tell women what they can and can’t do with their bodies. This is an obvious example of the ad hominem fallacy. My arguments against abortion are completely independent of my gender. My arguments against abortion, like any argument for or against anything, is either good or bad independent of any factor about me. If my arguments were given verbatim by a woman, would they automatically turn into good arguments against abortion? Why is it that when I argue against abortion, my arguments are bad and can be dismissed, but if a woman were to give those same arguments, they could be given credence? It makes no sense, and that’s precisely why ad hominem is a logical fallacy.

Abortion is murder. Abortion is the practice of taking a living person and chopping it up into little pieces and then throwing the dismembered body in the trash. The scientific evidence for the personhood of the fetus is overwhelming — everything from the fact that the fetus has his own genetic code, the fact that he’s growing from the time he’s conceived to the fact that just 3 weeks after conception, the heart starts beating, points to the fact that the unborn are living human beings and that abortion ends them. These are scientific facts. These are true no matter which gender espouses them.

What Is And Is Not Ad Hominem

Clearly, there’s nothing logically falacious about an insult. It’s just rude. It only becomes fallacious if you reject the conclusion of the person’s argument on the basis of that negative fact.

It’s important that we, as Christians, recognize bad reasoning when it
comes our way. Many people are being talked out of their faith by people who use bad reasoning. If you can spot the fallacy, you can refute the argument, and thus negate the conclusion. I hope that you’ll come back to Cerebral Faith to see the other entries in this series.