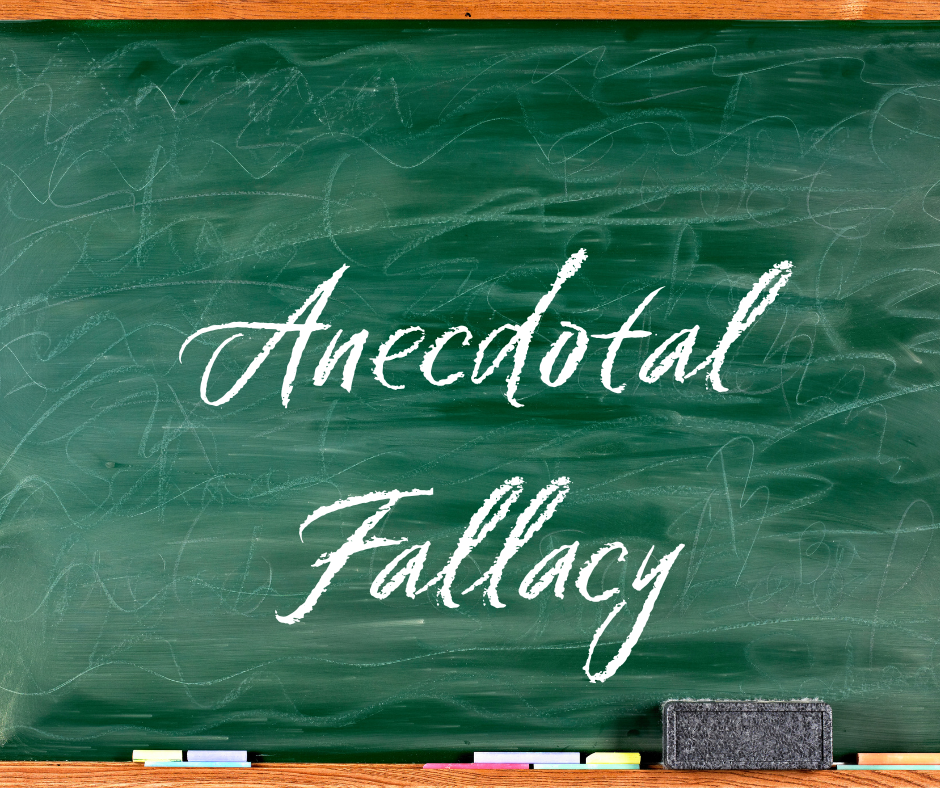 This is part 9 on a series I’m writing on logical fallacies. A logical fallacy is when a mistake is made in reasoning and argumentation. Fallacies come in 2 types; formal and informal. A formal fallacy is when a logical mistake is made in the form of an argument; that is to say; when it doesn’t follow 1 of the 9 rules of logic. An informal fallacy, by contrast, has to do with the content of the argument itself.

This fallacy is committed when personal experience or an isolated example is used instead of a sound argument or compelling evidence. This is a logical fallacy because there is a larger chance that the things in question may be unreliable due to cherry-picked or otherwise non-representative samples of typical cases. Anecdotal evidence is considered dubious support of a generalized claim.

Examples Of The Anecdotal Fallacy

“I’ve tried apologetics, but it doesn’t work. None of the unbelievers I’ve ever argued with have been convinced that Christianity is true. You cannot argue people into the Kingdom of God.”

This claim is fallacious because the person is saying that just because some of the people he’s given arguments to have remain unconvinced, that therefore no one comes into the faith through arguments. This is using very limited personal experience to come to a conclusion about the effectiveness of Christian Apologetics. Just because some unbelievers come to Christ through non-apologetics pathways and just because some unbelievers continue to reject Christ regardless of the arguments we present them, it doesn’t follow that all skeptics will remain unpersuaded by our arguments. It doesn’t follow that apologetics is a waste of time. Many a skeptic has become convinced of the truth of Christianity through rational argumentation; Lee Strobel, C.S Lewis, Josh McDowell, and J. Warner Wallace just to name a few.

Another Example: “Faith Healers work. My Grandpa went to one and his Diabetes disappeared!”

While it may be true that this person’s grandfather had diabetes and that it’s now gone, it doesn’t follow that faith healing is legitimate. It may have been that God healed this person through the prayers of several people in his community, who had been praying for this person long before he went to see the faith healer, and it’s just a coincidence that God acted at that moment in response to those peoples’ prayers. If that’s the case, then this person’s grandfather would have been healed regardless of whether he went to see the faith healer or not.

Well, that does it for today’s blog post. Come back to Cerebral Faith tomorrow to learn about another logical fallacy. It’s important that we, as Christians, learn how to spot logical fallacies. Believers in Christ all over the world are being talked out of their faith by non-Christians who use bad reasoning. Their arguments, to the untrained mind, sound persuasive when they really shouldn’t because they’re logically fallacious. Therefore, if we can spot logical fallacies when they’re committed, then we can avoid being fooled.
Liked it? Take a second to support Evan Minton on Patreon!