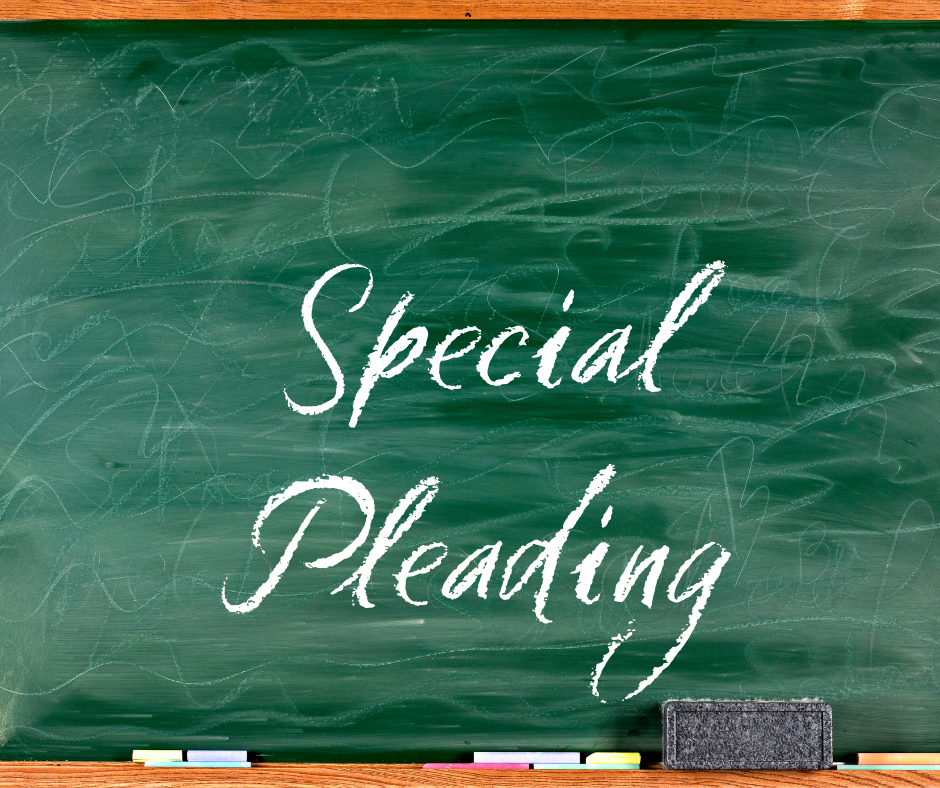 Formal fallacies are committed when the form of the argument is logically invalid; that is to say, when it doesn’t follow any of the 9 rules of logic (e.g modus ponens, modus tollens, hypothetical syllogism, disjunctive syllogism, etc.). Informal fallacies, by contrast, are committed when the content
of the argument is logically fallacious. For example, an argument may follow the rules of logic, but the conclusion still be unjustified because a fallacy is located in the content of the argument. Perhaps one of the premises attacked the opponent instead of the issue, or perhaps one word stated in different premises take on different definitions of the word.

We’ve looked at many logical fallacies in this series so far. Today, I’ll be talking about….

Special Pleading is when one makes up an exception or moves the goal posts when one’s claim is shown to be false. This logical fallacy also sometimes goes by the name “The Taxicab Fallacy” because the one committing this fallacy simply makes exceptions when it suits his fancy, just like how a passenger of a taxi hops out of the taxi whenever he reaches his desired destination.

One example of this fallacy sometimes comes from atheists who try to refute The Kalam Cosmological Argument. They attack the first premise of the argument “Whatever begins to exist has a cause” by saying that the principle is true for everything in the universe, but is not true of the universe itself. For all we know, these atheists argue, the universe could have popped into being out of nothing without a cause!

Another Example: “Pastor, I do believe we should love our enemies, but I cannot love THAT guy after what he did to me.”

The person in this example made “THAT guy” an exception to the command Jesus put forth that we love our enemies. Jesus didn’t say to love your enemy under certain conditions, or to not love an enemy if he crosses some sort of line. He said to love your enemies, to pray for those who persecute you, to bless those who curse you. (Matthew 5:38-44 cf. Luke 6:27-36). Jesus didn’t mention any potential exceptions to this command. This resentful person is committing the special pleading fallacy.

That does it for today’s logical fallacy. Come back to Cerebral Faith tomorrow to read about another one.