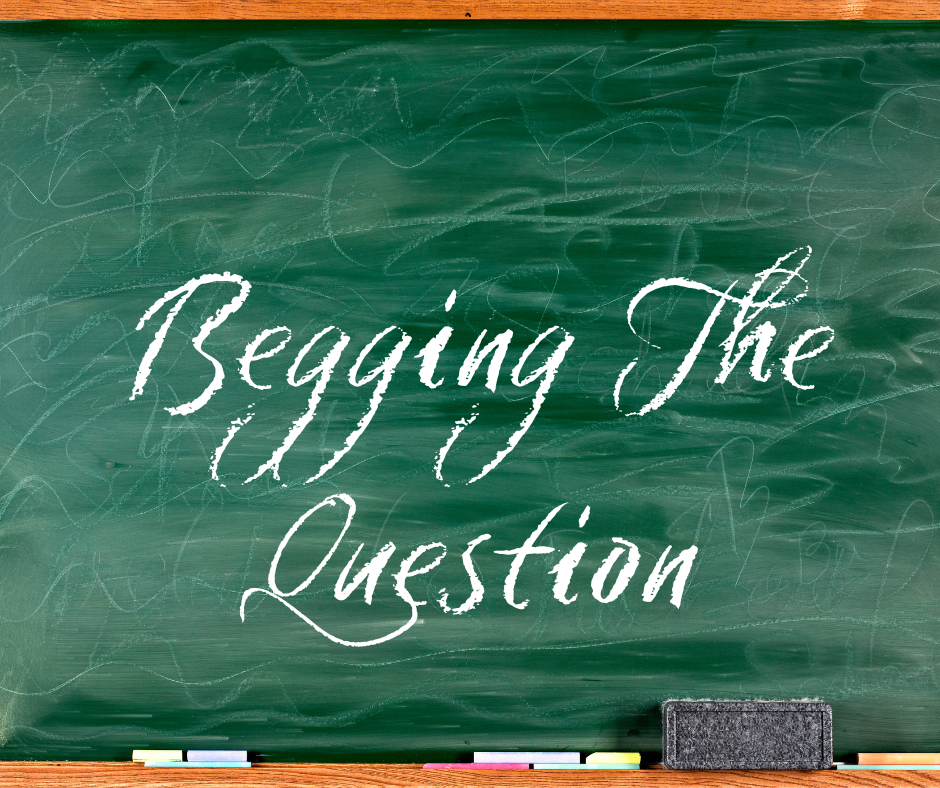 This is part 10 of a series I’m writing on logical fallacies. A logical fallacy is when a mistake is made in reasoning and argumentation. Fallacies come in 2 types; formal and informal. A formal fallacy is when a logical mistake is made in the form of an argument; that is to say; when it doesn’t follow 1 of the 9 rules of logic. An informal fallacy, by contrast, has to do with the content of the argument itself.

The Begging The Question Fallacy

Examples Of Begging The Question

This argument for The Bible being true is logically fallacious because the Christian is reasoning in a circle. His conclusion is implicit in his initial premise. The rational unbeliever will not be convinced by an argument like this, and sadly, far too many Christians justify their belief in The Bible in this way.

My point is this; these men were not philosophers. They did not know of the existence of these various arguments for the existence of God, and in fact, these arguments hadn’t even been formulated until some time after The New Testament era. If these men were simply making up a god like other religions have done, then how could they get all of the right details of this God spot on. We know the arguments are logically valid, have true premises, and commit no informal fallacies, so their conclusions follow that such a Being exists. It’s extremely improbable that these “bronze aged goat herders” could accidentally describe the God Of Natural Theology so perfectly. The best explanation is that The God Of Natural Theology and The God Of The Bible are one in the same, and that the reason the biblical authors describe Natural Theology’s God so perfectly is because He is the one who inspired their writings. I go into more detail of this argument in “5 Reasons To Believe The Bible Is Divinely Inspired” and I go into great detail on this topic in my book “Inference To The One True God: Why I Believe In Jesus Instead Of Other Gods” which will be out sometime this year.

A second reason I give in the article “5 Reasons To Believe The Bible Is Divinely Inspired” is that Jesus believed the Old Testament was divinely inspired, and the historical evidence shows that He believed that He was God and that He died and rose from the dead. Given that Jesus made such lofty claims about Himself, God would never resurrect Him from the dead if He were not telling the truth. God would never raise a heretic and a blasphemer. If Jesus rose from the dead as the historical evidence indicates, then we can put a lot of stock into what Jesus taught regarding spiritual matters, such as the divine inspiration of The Old Testament.

I also argue in the article that we can believe The Bible is divinely inspired because of fulfilled prophesies and the scientific accuracy of Genesis, as well as the evidence of people whose lives were transformed when they gave their lives to Jesus Christ.

As you can see, none of these reasons for the divine inspiration and truth of The Bible beg the question. And so, the rational unbeliever would be justified in coming to believe that The Bible is the holy word of God for these reasons.

Another Example: Okay, so we looked at one circular argument from a Christian. Now let’s look at one often given by atheists!

Are you getting just as dizzy as I am? Oh good. It’s not just me. We got dizzy because this atheist’s argument against miracles is a vicious circle. The questioner isn’t getting a justified conclusion because the atheist objector’s conclusion is his very first premise. He believes miracles don’t occur because he believes every report of a miracle occurring is false. But he believes that every report is false because, he claims at least, that there is uniform experience against it? But how does he know that? Has he closely investigated every single miracle claim ever made and arrived at this conclusion. No. He came to this conclusion because he believes miracles don’t occur.

This is a fallacious argument against miracles. It begs the question. And as I said above, there’s good historical evidence that at least one miracle has occurred; the resurrection of Jesus.

Yes, I am a fan of the transcendental argument. One reason is because atheists claim to be the champions of logic and reason, and they act like they have a monopoly on it. It’s extremely ironic, because if atheism is true, then there’s no way we could trust our reasoning. As C.S Lewis wrote:

“Supposing there was no intelligence behind the universe, no creative mind. In that case, nobody designed my brain for the purpose of thinking. It is merely that when the atoms inside my skull happen, for physical or chemical reasons, to arrange themselves in a certain way, this gives me, as a by-product, the sensation I call thought. But, if so, how can I trust my own thinking to be true? It’s like upsetting a milk jug and hoping that the way it splashes itself will give you a map of London. But if I can’t trust my own thinking, of course I can’t trust the arguments leading to Atheism, and therefore have no reason to be an Atheist, or anything else. Unless I believe in God, I cannot believe in thought: so I can never use thought to disbelieve in God.” – C.S Lewis