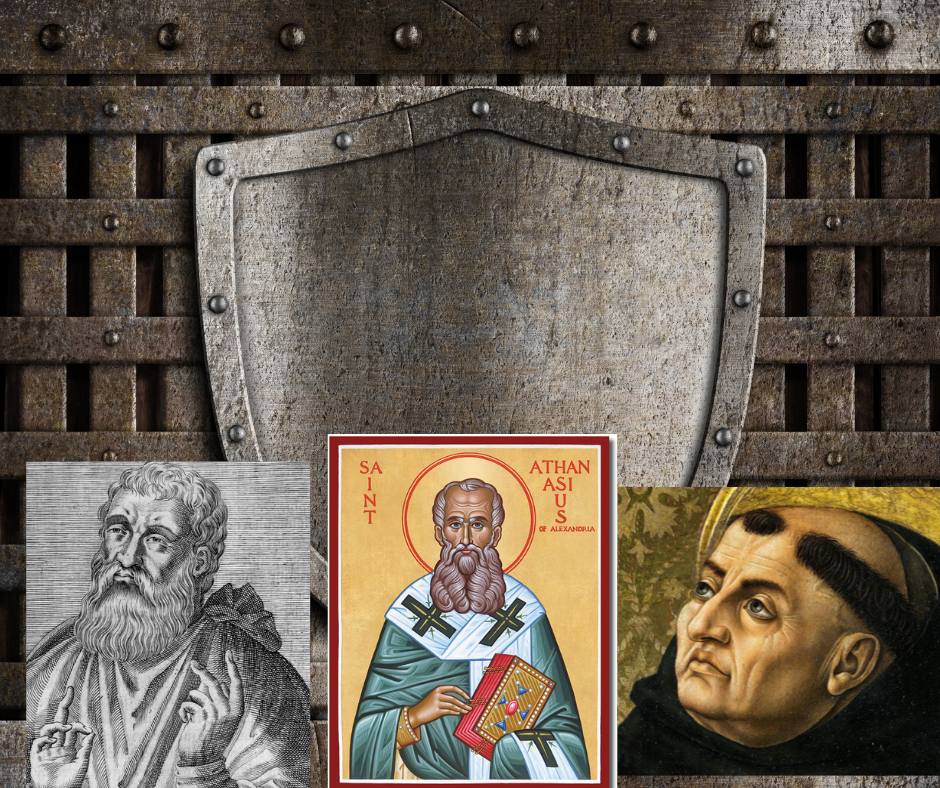 Peace of Christ, Mr.Minton. As you have described before (if I recall correctly), we are in a golden age of apologetics. However, I would like to ask about the era before the golden age. What was apologetics like before the 1930’s? What kind of arguments were used? Do you recommend the work of any ‘ancient’ apologists for aspiring apologists?

When I said we were in the golden age, I meant a few things. First, that we have more access and easier access to materials than ever before. Anyone with an internet connection can buy books, access podcasts and videos, etc. and learn the case for Christianity.
Secondly, I had in mind the resurgence of interest in apologetics in western civilization, rather than at all times and all places. For several decades, the church – in the United States especially – has not intellectually engaged their faith. We have decades of fideism and fundamentalism. But people are becoming gradually interested in apologetics and theology because either they or someone they know are being challenged.
It’s no longer possible in the internet age to live in a Christian bubble and isolate oneself from criticism. I mean, unless you just completely disengage from all forms of evangelism and just never ever talk to a non-Christian, at least. Being challenged in the college classroom or on social media, people are discovering the need to actually know what they believe and why they believe it.
The Christian Bubble is no longer viable in this age where anti-Christian YouTubers, bloggers, and podcasters are just a couple of clicks away on various devices connected to the internet. We should train children up in the way we should go rather than try to keep them in little bubbles so they can’t be contaminated by the immorality and anti-Christian philosophies of the world. The Christian Bubble was workable for the Boomers, for the Gen X’ers and (sort of) for my generation (until I was a teenager anyway in the mid 2000s), but it isn’t anymore.
Spiritual Inoculation is the answer rather than spiritual quarantine. When I have kids, I will teach them what The Bible says on morality. I will teach them sound doctrine, and I will teach them as much apologetics as I can. And ultimately, I will pray for them, that they can keep their faith and live a life pleasing to God in this world that’s living in open rebellion against Him. The Christian Bubble has been popped by the needle that is social media. This is why I don’t think Christians should overly concern themselves with homeschooling. There’s benefits to that, to be sure. But if for some reason, parents can’t manage it, I don’t think they should let it bother their consience. I bring this up because there’s a person on my Facebook friends list who goes just shy of shaming Christian parents for NOT taking their children out of public schools.
The whole “Don’t look at this. Don’t listen to that. Don’t hang out with these people.” Kind of the three monkeys style of protection just isn’t possible in this digital age.
Don’t want your child talked out of their faith by their atheistic professor? Well, sorry, but you ought to worry more about the Cosmic Skeptic or Rationality Rules while they’re in high school and earlier.
Those who know my story know that I got into apologetics after being nearly talked out of my faith by atheists I tried to evangelize on Twitter.
And do you think they’ll be shielded from radical leftist ideology by not being in school? I don’t think so. Maybe if you really, really, really, really try hard and make the world record for being the most Helicopteriest of all Helicopter Parents in the history of mankind, you might be able to shield them from these ungodly ideas floating about social media, YouTube, blogs, et. al. Maybe.
OR…..you could teach them the truth. You could teach them sound doctrine, apologetics, what The Bible says about morality (including sexual morality), and help them cultivate a strong relationship with Jesus.
The Christian Bubble is dead. Quarantine is no longer an option. Innoculation against bad ideas is the only option we have left, and quite frankly, we should have been doing it all along. Any religion that can’t stand up to criticism shouldn’t be believed, if you ask me. More and more people are realizing that the Christian Bubble has been popped and thus, the need for a rational, evidential foundation for their faith. Thus, I find the crowds at apologetic conferences like NCCA getting bigger and bigger every year. Well, at least prior to the pandemic.
Thirdly, what I meant when I said “We live in the golden age of apologetics” is this; we’ve discovered evidence to use that wasn’t available to previous generations of Christians. For example, although the Kalam Cosmological Argument has been around for 1,000 years, it’s only been since the 1920s that we’ve been able to use Big Bang Cosmology to support its second premise. And it’s also been only since the 1900s that we’ve known about Cosmic Fine-Tuning of the constants and quantities of nature. Prior to that, design arguments mostly came in the form of Watchmaker type arguments like William Paley made. Now, we have evidence for design in the very laws of physics itself. This design evidence is the most important, I think, because it does an end run around the issue of macro evolution. This is why I disagree with some young and old earth creationists who say that if evolution is true, God’s fingerprints in nature would be undetectable. As I said to Dr. Fuz Rana in the most recent episode of Cerebral Faith Live, at worst, God’s fingerprints would be undetectable in biology. But the origin of the universe, the fine-tuning of the universe (and I also brought up objective natural beauty) would all point to a Creator-Designer of the universe.

I’d recommend looking into the works Tim McGrew or Sarah Enterline. You can contact them by going to HistoricalApologetics.org Not only can you e-mail them from there, but they have blog articles on historical apologetics.

Shortly before I wrote this article, I came across a two volume work called “Christian Apologetics: Past and Present” edited by William Edgar and K Scott Oliphant. I can’t say whether I endorse this or not as I only just now found it, but these two books seem to be about the very thing you’re inquiring about, so it might be worth a read. Hopefully I’ll have Logos Bible Software by then and can buy these there rather than on Kindle. I also find Bruce Shelly’s book “Church History In Plain Language” to be a nice summarized survey of church history in general.

Which ancient Apologist would I recommend reading? I would say that at the top of your list should be the works of Justin Martyr, Ignatius, Athanasius, and Thomas Aquinas. Athanasius is an invaluable source for defenses of the Trinity and while I don’t agree with all of Thomas Aquinas (if I did, I’d be a Thomist), nevertheless, he’s still got a lot of good things to say.