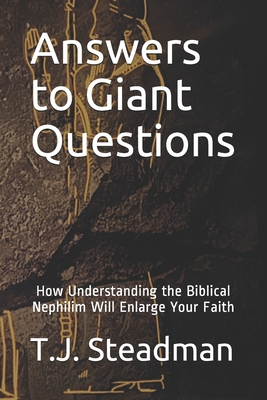 Answers To Giant Question is an excellent work in biblical scholarship. If you’re a theology nerd like me who has a particular interest in the Nephilim or The Bible’s primeval history, you should read this book. In the first section of the book, Steadmann argues that the Nephilim are the giant offspring of angels and humans having sexual relations. He proves this from the biblical text and shows how the non-supernatural interpretations (which, as he points out were utterly non-existent until around the fourth century A.D) are flawed and cannot account for the biblical data as well as The Angelic-Hybrid view.

In section 2 of the book, he addresses the question of how the Nephilim could have appeared post flood. He looks at the possibility that the Giants could have survived the flood, he looks at the possibility that the Angels who impregnated the women Before the Flood repeated their offense After the flood, and he looks at the possibility that maybe someone on The Arc such as Noah, Noah’s wife, or one of Noah’s sons or the wives of Noah’s sons could have carried on the genes of the Nephilim that were dormant for a little while but then resurged later like atavisms in later generation. He looks at all of these possibilities and uses biblical texts and logic to rule them out. The option that he thanks is the most plausible, and he uses extra biblical ancient near Eastern documents to bolster this argument, is that the Biblical Nimrod summoned one of the Fallen Watchers and they used black magic to transform him into a Nephilim.. and so, it was Nimrod being super naturally transformed into a Nephilim that caused the Nephilim to reappear post-flood.

It is a pretty solid work on this topic, and in my opinion, you’ll be doing yourself a disservice if you don’t read it. Like a lot of books dealing with biblical studies and Ancient Near Eastern stuff, this is not bedtime reading. This is a book for serious study. This book will make you think. You’ll need to think. And that’s a good thing. We need to use the brains that God gave us.

He also talks about the war Israel had against the giant clans in their conquest of Canaan, which not only has theological value but also has apologetic value for those who object to the “slaughter of the Canaanites” on Moral grounds. Steadman argues from extra biblical sources (and some places in scripture) that the land of Canaan was fickle when it came to giving people resources to live off of. Of course, it was “a land flowing with milk and honey” for the Israelites. Maybe God miraculously transformed it? Steadman doesn’t get into this conflicting issue. But, anyway, given that, the people were always ready to get up and move whenever (A) famine struck or (B) they were under military threat. On this basis, Steadman infers that the only people the Israelites really had to kill were soldiers (giant and human) who stayed behind to fight. There were probably VERY few civilians who would have chosen to say (e.g Rahab and her family). So although I argue that God’s destruction of the Canaanites was just on the basis of how utterly depraved they were (one of the things they did was ritually sacrifice their children to Molech) and He gave them 400 years to repent, if there were no people in the city to be destroyed in the first place, the moral objection against God is EVEN WEAKER! He also explains how the book of Joshua is a book in the ancient genre of “Military Text” and how phrases such as “Men and women, and children, and cattle” didn’t mean the literal indiscriminate slaughter of people and animals, but rather it was a military idiom for total conquest of a city or nation. For people who have been bothered by the conquest narratives, this portion of the book will be like a breath of fresh air.

The last couple sections are focused on application and eschatology. The application in Section V is about making this information useful to believers. This is something that I haven’t seen other Nephillim books do. This feature really sets it apart from other books on this subject. This isn’t to knock other Nephilim books such as Michael Heiser’s “Reversing Hermon” or Brian Godawa’s “When Giants Were Upon The Earth”, but it is nice to have an application portion of the book, especially if you’re a pastor who does expository preaching. If you’re an expository preacher and you want to go through sections of The Bible at a time, I can imagine that when you get to Genesis 6, you’ll want to talk about the Nephilim. Since preaching usually goes from (1) reading text → (2) Exegesis → (3) Application, if you don’t know what to do in that third step, you’ll be faced with a dilemma. You’ll either give your congregation a bunch of cool theological facts and after the sermon, someone will say “That was an interesting sermon, preacher. But what does that have to do with me?” or you’ll just skip over it. Skipping over parts of scripture is something no preacher ought to do. I believe the theological education in the church is extremely shallow, partly due to preachers doing exactly that. 2 Timothy 3:16 says that ALL scripture is God breathed and is useful. As Michael Heiser likes to say “If it’s in there, it’s important”.

The last section of the book had to deal with eschatology. As a historic preterist, I kind of found myself disagreeing with his arguments and conclusions more here than in other parts of the book (in other parts of the book, I had minor disagreements like his denial that the ancient Israelites literally held “dome cosmology”). But I expected that to be the case, given that Historic Preterism (or any form of preterism for that matter) isn’t mainstream. I’m not going to argue against any futurist view of eschatology here. That is not the purpose of this post. I only bring it up for the sake of those who know I’m a preterist and might be puzzled that I’m endorsing a book that promotes a futuristic view of things like the Olivet Discourse. Apparently, people think you have to agree with on author on EVERYTHING in order to endorse their book. I don’t know where that’s written. But I get this a lot. This disclaimer is a pre-emptive strike against those who would bring this up to me later.

This is a fantastic book and I would love to read it again sometime.